Trump: Schiff 'has not paid the price, yet' 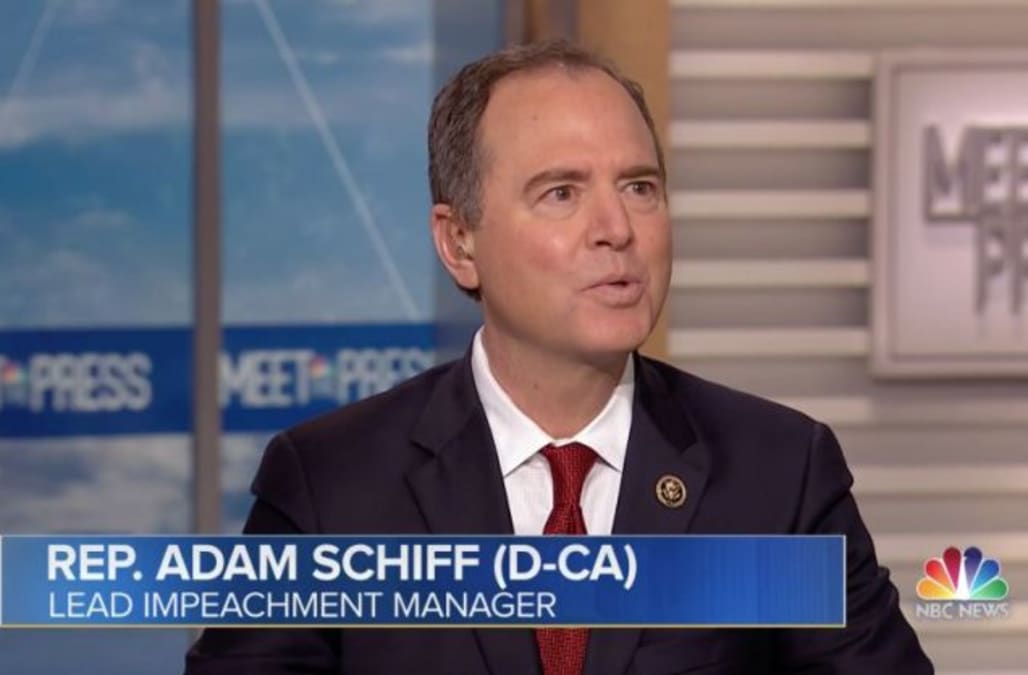 President Trump continued to ratchet up his rhetoric against Rep. Adam Schiff, D-Calif., tweeting Sunday that the lawmaker has “not paid the price, yet,” for his actions pushing for Trump’s impeachment and conviction.

“Shifty Adam Schiff is a CORRUPT POLITICIAN, and probably a very sick man. He has not paid the price, yet, for what he has done to our Country!” Trump exclaimed.

Schiff, the lead House impeachment manager, responded to Trump’s tweet later in the morning during an interview on NBC’s “Meet the Press.”

“This is a wrathful and vindictive president. I don’t think there’s any doubt about it,” he said. “And if you think there is, look at the president’s tweets about me today, saying that I should pay a ‘price.’”

“Do you take that as a threat?” moderator Chuck Todd asked.

“I think it’s intended to be,” Schiff replied.

On CNN’s “State of the Union,” Rep. Zoe Lofgren, D-Calif., who’s also a House impeachment manager, responded to the tweet by saying Trump “really ought to get a grip and be a little more presidential.”

“The President has a tendency to say things that seem threatening to people… he really ought to get a grip and be a little more presidential.” House impeachment manager @RepZoeLofgren reacts to President Trump’s latest tweet targeting Rep. Adam Schiff. #CNNSOTUpic.twitter.com/Mz8gLJPPeM

Trump has made Schiff, the chairman of the House Intelligence Committee, a lead target of his Twitter broadsides for months. Schiff spearheaded the House investigation of the administration’s freeze of military aid to Ukraine and requests that Kyiv investigate former Vice President Joe Biden and his son Hunter.

The House ultimately impeached Trump for abuse of power and obstruction of Congress, and Schiff is leading his chamber’s uphill push for the Republican-controlled Senate to convict the president and remove him from office.

In particular, Trump has fixated on Schiff’s paraphrasing a call between the president and Ukrainian President Volodymyr Zelensky as a request to “make up dirt on my political opponent [Biden.]” Trump has even gone as far as to falsely suggest that Schiff may have committed treason.

“The Impeachment Hoax is a massive election interference the likes of which has never been seen before,” Trump tweeted Sunday before pivoting to another attack on Schiff: “Shifty is now exposed for illegally making up my phone call, & more!”

Schiff told “Meet the Press” he didn’t have any regrets about characterizing Trump’s Ukraine phone call as a blunt request for help in the 2020 election.

EXCLUSIVE: Rep. Adam Schiff says he does not have any regrets about his opening statement on the Ukraine phone call or his thoughts on the Russian collusion issue. #MTP#IfItsSunday@RepAdamSchiff: "You can't say it is an accident when you repeatedly are seeking foreign help." pic.twitter.com/AmJYwl3JT7