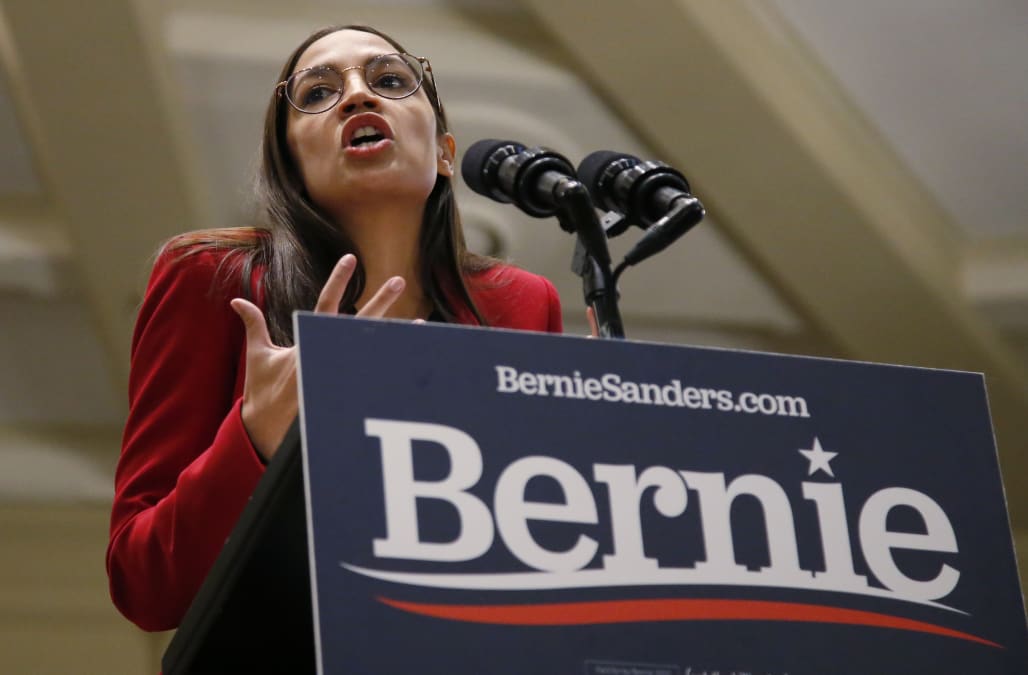 IOWA CITY, Iowa — Two of Bernie Sanders’s highest-profile allies, Rep. Alexandria Ocasio-Cortez, D-N.Y., and liberal documentary filmmaker Michael Moore, filled in for him on the campaign trail Friday night, speaking to a rally here at the University of Iowa, as the Vermont senator participated in the impeachment trial in Washington, D.C.

Their message to the audience, overwhelmingly students, was not to settle for more moderate candidates who claim to have a better chance in the general election against President Trump, but to stick with Sanders.

Moore referenced campaign ads by another (unnamed) Democratic hopeful, paraphrasing his message as: “You should vote for him because he’s the safe candidate.”

He meant former Vice President Joe Biden, who debuted a new commercial on Friday that was focused on electability.

“This is no time to take a risk. We need our strongest candidate. So let’s nominate the Democrat Trump fears the most. Vote Biden. Beat Trump,” a narrator says in the ad.

Biden has been a consistent frontrunner in national polls, with Sanders generally second. But new polling in Iowa, which holds the first-in-the-nation caucuses on Feb. 3, puts Sanders in the lead there.

The former vice president has made electability a central part of his pitch to voters, contrasting his centrist policies and bipartisan approach to politics to Sanders’s radical “democratic socialist” platform, including his controversial proposals for universal public health care. In his speech, Moore argued this ignored polls showing “Bernie beats Trump head-to-head by a larger percentage than any of the other candidates.” Moore appears to have been cherry-picking his data; RealClearPolitics, which amalgamates polling data from numerous sources, as of Saturday shows Biden beating Trump by an average margin of 4 points, and Sanders defeating the president by 3.1 points.

Moore went on to argue that focusing on who might be electable in a general election has historically been a bad strategy for Democrats.

“I started to think about this ‘play it safe.’ Every time we’ve been told that … and we voted safe we lost,” Moore said, adding, “Every time we play it safe, we choose the safe nominee, and we lose … except those times — time — when we decided to take a risk.”

Moore was referring to the 2008 election, which was won by Barack Obama despite fears voters wouldn’t send an African-American to the White House.

“You remember … two years before Barack Obama was going to run and there was talk about it, how many people in here said ... ‘I know this country I live in,  there’s no way they’re going to elect a black man,” said Moore. “But Barack Obama didn’t care.”

Moore then introduced Ocasio-Cortez, who rocketed to political stardom when she won her New York congressional district in a shocking upset in the 2018 midterms. The congresswoman, who is nicknamed “AOC,” had already made one trip to Iowa to campaign for Sanders last November. Some supporters are already envisioning her as a potential candidate as soon as 2024, when she will become eligible for the presidency less than a month before the general election.

Ocasio-Cortez shared a personal story about how she went a “few years” without going to the doctor because she didn’t have health insurance when she worked in restaurants prior to her election. The congresswoman talked about the fear and anxiety she experienced during this period and suggested it informed her conviction the U.S. needs the complete the Medicare for All universal health care program with “no cracks in the system” that Sanders has championed. She noted some moderate Democrats regard Sanders’s proposals for health care, a “Green New Deal” to address climate change, and criminal justice reform as unrealistic. But she believes the real issue for Sanders’s opponents is whether a candidate with that platform can win.

“They call it unrealistic. You know what I think is so funny? I go back to D.C. … Those folks who argue against those same policies, behind closed doors, they never tell me it’s unrealistic,” Ocasio-Cortez said.

“They don’t use that same argument in the Capitol,” she continued. “The argument that they use is, ‘We will lose.’ … It’s not that we can’t, it’s that we’re scared.”

Ocasio-Cortez went on to say she has spent “so many years of my life scared” about a litany of concerns including making rent, health care costs and her family in Puerto Rico.

Along with Ocasio-Cortez and Moore, the event included a talk by Sanders, who delivered his stump speech by telephone from Washington shortly after the day’s impeachment proceedings wrapped up. Sanders and his rivals who are also stuck in the Senate during the impeachment trial, including Elizabeth Warren of Massachusetts and Amy Klobuchar of Minnesota, have been relying on surrogates to bring their messages to voters.

Both Moore and Ocasio-Cortez have more planned appearances for Sanders in Iowa over the weekend. Klobuchar deployed her daughter, Abigail Bessler, to campaign for her in Iowa last Wednesday. Warren had actress Ashley Judd rallying for her in New Hampshire, which is the second state on the primary calendar, on Friday. Judd is scheduled to return to New Hampshire for Warren on Jan. 28. Jonathan Van Ness, the podcaster, hairdresser and star of the Netflix makeover show “Queer Eye,” is set to campaign for Warren in Iowa on Jan. 26. While Warren has canceled some events due to impeachment, she is currently scheduled to join Van Ness in his last event on Sunday, which is the one day of the week where there is a break in the impeachment proceedings.

Students at the University of Iowa were divided on whether the Sanders surrogates were an exciting draw.

Josh, a senior who said he is undecided about whom to support in the primary, was in the building where the Sanders rally was set to take place on Friday evening planning a spring break trip with friends. He said he was not going to watch Moore and Ocasio-Cortez speak but would have wanted to see Sanders “a lot more.”

“I don’t really follow them,” Josh said of Sanders’s surrogates.

Nori Oshiro, a junior who was studying in the lounge outside the Sanders rally, said he understood the senator had “more pressing issues right now” with the impeachment proceedings. Oshiro planned to attend the rally and was quite excited about the guests.

“I know of AOC since she started campaigning,” Oshiro said. “I’ve seen Michael Moore’s films since I was a teenager. So, these are people that I tend to look up to and get a lot of information from.”

The students were also divided about whether Warren’s star surrogate, Van Ness, was a more exciting draw than Sanders’s allies.

“They’re pretty even in my book,” said Presley, a graduate student who is deciding between Sanders and Warren.

Brittan and Anna, two sophomores who attended the Sanders rally, were quite excited to see Ocasio-Cortez.

“I love her,” Brittan said. “She’s just an amazing person.”