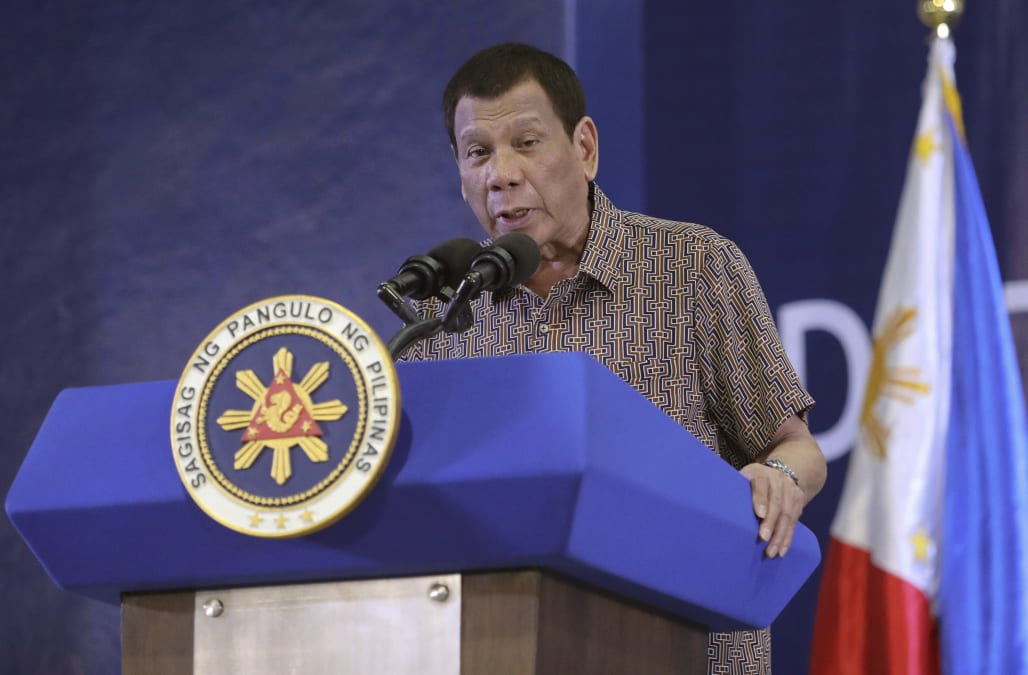 MANILA, Philippines — The Philippine president has renewed a threat to terminate an accord that allows American forces to train in the country unless Washington restored a visa of a political ally linked to human rights violations.

President Rodrigo Duterte said in an expletives-laced speech Thursday night that he would give notice to the U.S. terminating the Visiting Forces Agreement, known by its acronym VFA, if the reported cancellation of the entry visa of Sen. Ronald dela Rosa was not corrected within a month.

“I’m warning you ... if you won’t do the correction on this, I will terminate the ... Visiting Forces Agreement. I’ll end that son of a bitch,” Duterte said in televised remarks in central Leyte province.

Duterte also rejected an invitation by President Donald Trump to join a special meeting the U.S. leader will host for leaders of the Association of Southeast Asian Nations in March in Las Vegas, presidential spokesman Salvador Panelo said. The Philippines is a founding member of the 10-nation regional bloc. The security accord, which took effect in 1999, provides the legal cover for American troops to enter the Philippines for joint training with Filipino troops.

A separate defense pact subsequently signed by the treaty allies in 2014, the Enhanced Defense Cooperation Agreement, allowed the extended stay of U.S. forces and authorized them to build and maintain barracks and other facilities in designated Philippine military camps.

There was no immediate reaction from U.S. officials. Philippine Justice Secretary Menardo Guevarra said Friday his department would study how the agreement's abrogation could be done.

Sen. Panfilo Lacson said the Supreme Court should soon respond to a petition asking whether the Senate’s consent is needed before the executive department can terminate a bilateral agreement or a treaty that senators had ratified. The Philippine Senate ratified the VFA after lengthy debates.

Duterte first threatened to abrogate the VFA in late 2016 after a U.S. aid agency put on hold funds for anti-poverty projects in the Philippines. The 74-year-old leader, who has been harshly critical of U.S. policies while often praising China and Russia, has walked back on his public threats before.

Aside from threatening to take down the VFA, Duterte said without elaborating that he would ban some U.S. senators from entering the Philippines. He apparently was referring to American senators who sought to ban unspecified Philippine officials from entering the U.S. for playing a role in the continued detention of opposition Sen. Leila de Lima, a vocal critic of Duterte’s deadly campaign against illegal drugs.

The U.S. has not released any list of Philippine officials who would be banned from entering. Duterte has publicly accused de Lima of receiving money from drug traffickers and called for her detention.

“They cannot dictate on us or bully us into releasing a citizen of this country who is lawfully detained ... So the president feels that we cannot sit down and just watch idly,” Panelo told reporters, adding that the demand by U.S. senators for de Lima’s release was a breach of the country’s sovereignty.

Dela Rosa had enforced Duterte’s anti-drug crackdown as head of the national police starting in June 2016, when the president took office. The crackdown has left thousands of mostly poor drug suspects dead, alarming U.N. human rights advocates and Western governments, including the U.S.

It also prompted critics to file complaints against Duterte for mass murder before the International Criminal Court. An ICC prosecutor has been examining the complaints.