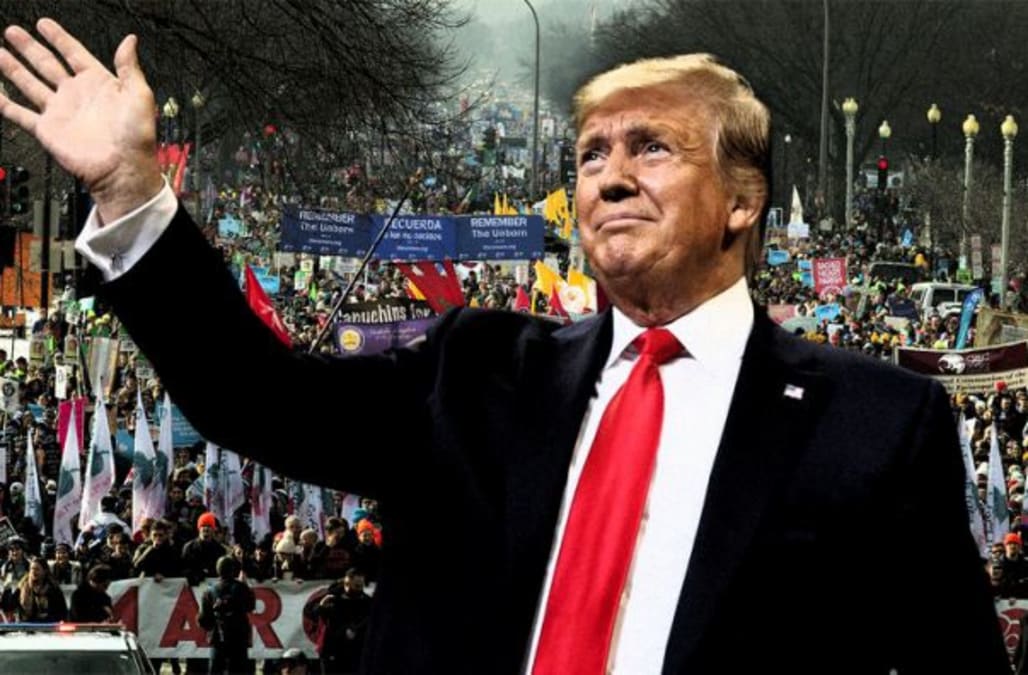 If there was ever any doubt whether religious conservatives will stick with President Trump — and there really wasn’t — it went away this week when the president announced he would be the first president to attend the annual March for Life in Washington, D.C.

For nearly half a century, huge crowds of anti-abortion activists have thronged to Washington each January to march from the White House Ellipse to the U.S. Capitol — often in freezing temperatures and even in snowstorms — to protest Roe v. Wade, the 1973 Supreme Court decision legalizing abortion.

Every year, the anti-abortion crowd and its advocates have complained that the news media ignored their efforts. And every year, until now, that sense of being overlooked, ignored and minimized — a psychology that is inherent to many strands of white evangelicalism — was reinforced by the fact that even conservative Republican presidents who supported their cause wouldn’t show up at their event in person.

Republican presidents who did anything sent video messages of support. Even Trump did that the past two years, though he did show more support than normal by sending Vice President Mike Pence, an evangelical Christian. The marchers gathered on the National Mall or the Ellipse watching the president’s message on a video screen could turn their head and see the White House and wonder why the president didn’t come out and speak in person.

During many of the marches, the president was traveling, perhaps intentionally so the press couldn’t ask that very same question. But marchers didn’t necessarily know the president’s itinerary; they knew only that he wasn’t there.

Trump’s announcement provoked both excitement and latent resentment at past pro-life presidents.

“It’s great that Trump is speaking at the March For Life. It’s amazing that the Republican presidents before him hid in the White House and refused to come out and acknowledge the thousands of pro-lifers right outside their door. Shameful cowardice,” tweeted Matt Walsh, a conservative author and speaker.

It is likely true that past Republican presidents took support from religious conservatives for granted to some degree. But one former adviser to President George W. Bush told Yahoo News that he did not attend because the White House wanted the focus on the marchers themselves and their impressive show of numbers.

“Who wants pictures of politicians as your story rather than pictures of hundreds of thousands of people peacefully, prayerfully marching?” the former Bush adviser said.

Presidential security also added logistical headaches that would have complicated the march for its participants, the Bush official added.

Nevertheless, Trump’s presence at the 47th March for Life on Friday is another marker of how the president, whose past politics and personal behavior may have been antithetical to conservative Christianity, has claimed the religious right as his most hard-core political constituency. As Trump promised all the way back during the 2016 campaign, “we are going to protect Christianity.”

Already some pro-life activists had elevated Trump to the top of the pantheon of all presidents.

“Prolifers, there has NEVER been a president in US history that has done more to break down the abortion industry more than @realDonaldTrump. Not Bush, not Reagan...no one,” tweeted Abby Johnson, a former Planned Parenthood employee who is now an antiabortion activist.

Not every conservative evangelical was thrilled. The pro-life movement “is strongest when it speaks clearly to all about sanctity of human life from faith, moral, ethical, & science perspectives,” tweeted Alan Cross, a Southern Baptist writer. “Long-term result of Trump becoming spokesman for ProLife Mvmnt could be its weakening.”

But Ralph Reed, a veteran of the religious right and Republican politics, told Yahoo News that “the fact that Trump is appearing in person is of massive historical significance.”

“It is a game changer. It lends the prestige and the bully pulpit of the presidency to the pro-life cause,” Reed said.

And Reed, who now runs the Faith and Freedom Coalition, predicted that conservative politicians in the future would very likely pay a political price if they did not follow Trump’s newly established precedent.

“If future GOP presidents do not appear, it could be problematic for them,” Reed said.

More from Yahoo News:
Trump says his side in impeachment trial has 'all the material'
Schiff mauls Cipollone on impeachment trial's first day
Parnas said he is speaking out because he is afraid of William Barr