Could impeachment cost the GOP its Senate majority? 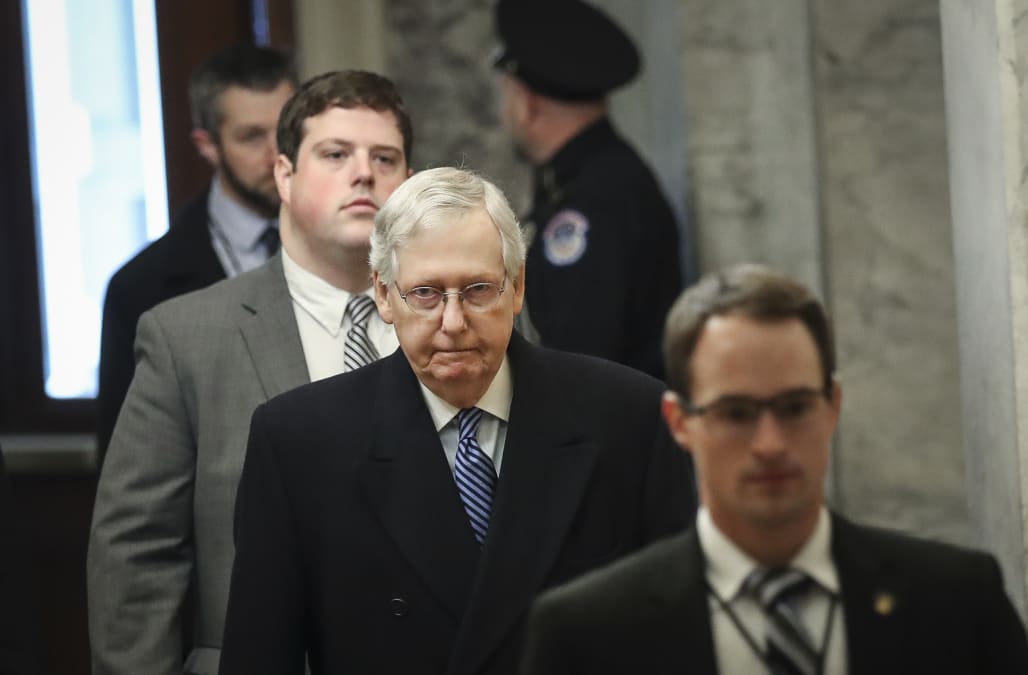 With the Senate unlikely to remove President Trump from office, the impact of the impeachment trial is most frequently viewed by whether it will help or hurt his reelection chances in November.

But it’s not just the electoral prospects of the president that are under the microscope as the Senate trial kicks into gear. The fate of a handful of incumbent senators facing tough races — and ultimately whether Democrats or Republicans control the Senate after 2020 — may be on the line.

Senate Majority Leader Mitch McConnell currently oversees a 53-47 Republican majority. Democrats would have to flip four seats to gain control of the chamber if Trump wins reelection and only three if a Democrat unseats him, thanks to the vice president’s role as the tiebreaking vote in the Senate.

Forecasters say as many as eight GOP-held seats could be vulnerable. Two Republican incumbents, Cory Gardner of Colorado and Susan Collins of Maine, are running in states that Hillary Clinton won in 2016. Seats in Arizona, North Carolina, Iowa, Georgia and Kansas could also be within reach for Democrats, experts say. Only one Democrat, Alabama’s Doug Jones, is seen as being at risk of losing his seat.

Control of the Senate will be crucial during the next presidential term. A Democrat could win the presidency thanks to an ambitious set of policy promises, only to have their agenda blocked if Republicans maintain control. If Trump wins a second term, he could find himself battling both houses of the legislature if Democrats take the Senate and hold on to the House.

Both Democrats and Republicans, for vastly different reasons, have said that the fate of American democracy is at stake as the Senate considers impeachment. The actions of individual senators in that pivotal process may weigh heavily on the minds of voters on Election Day. This puts GOP incumbents outside of deep-red states in a tough position, some argue.

A senator who appears not to take the inquiry seriously, perhaps by voting against hearing witness testimony, could push independent voters toward their Democratic opponent. At the same time, breaking with the party line could cause a backlash among die-hard Trump supporters in their state. These subtle changes could mean the difference in what are expected to be tight contests and may ultimately decide which party controls the Senate.

Others make the case that impeachment is less important to voters than pundits make it out to be. In the end, swing voters may be more focused on issues like health care and the economy than a partisan battle in Washington. There’s also a chance that the deeply polarized electorate has already made up its mind about Trump and, by extension, his fellow Republicans.

Opening statements in the Senate trial are scheduled to continue for several days and will be followed by a period where senators can ask questions. A vote on whether the trial will feature new witness testimony — which many see as one of the toughest decisions for swing-state Republicans — could come as soon the end of next week.

Republicans need to be careful not to look too partisan

“If the Senate does dismiss the impeachment charges without hearing witnesses or completing the trial, the “see no evil, hear no evil” attitude of Republican senators will clearly clash with most Americans’ sense of what constitutes a fair trial.” — Michael Conway, NBC News

Trump has the power to make or break Republican senators

“Trump is expected to dominate the political landscape for the next 11 months, and Republicans are wise to link arms with the Republican expected to spend more cash on ads, offices and staff than any other figure in the GOP. The trickle-down help to Senate, House and local candidates cannot be denied.” — Philip Elliott, Time

“The situation is a no-win for Collins, who risks fanning the flames of criticism from Democrats with a vote to acquit the president, while a vote to convict would expose her to furious attacks from Trump and her own party as she seeks reelection.” — Rachel Ohm, Portland Press-Herald (Maine)

Impeachment is just one of many factors voters will consider

“But for the vulnerable incumbents from both parties, the impeachment vote adds another potential risk factor — along with the economy, Trump’s controversies and the outcome of the Democratic nomination for president — to what is already a politically erratic election year.” — Laura Litvan, Bloomberg

Senators risk being dragged into a voter referendum on Trump

“This isn’t to say that any of these GOP senators are going to lose because of a single vote in the impeachment trial — whether on calling witnesses (or not) or removing Trump from office. They almost certainly won’t.” — Chris Cillizza, CNN

Impeachment has given Dem challengers strong ammunition for their campaigns

“All of this video of vulnerable GOP senators refusing to answer the most basic questions about Trump’s misconduct, and about their own willingness to hold him accountable for it, will come back to haunt them. ...These moments capture a level of evasiveness that might make even swing voters who are not pro-removal uncomfortable, since there are probably a lot of swing voters who still want the Senate to hold a real trial.” — Greg Sargent, Washington Post

Impeachment puts the GOP on defense

“Democrats have acknowledged that it’s unlikely the GOP-led Senate will remove Trump from office. But they had hoped impeachment will at least put pressure on some vulnerable Republican senators as Democrats fight to win the chamber in November.” — Nicolas Riccardi, Denver Post

“Impeachment threatens to become a double-edged election issue for Democrats, giving them hopes for gains in the Senate while putting their House majority at risk.” — Alex Swoyer and Gabriella Muñoz, Washington Times

Is there a topic you’d like to see covered in “The 360”? Send your suggestions to the360@yahoonews.com.