Trump says his side in impeachment trial has 'all the material' 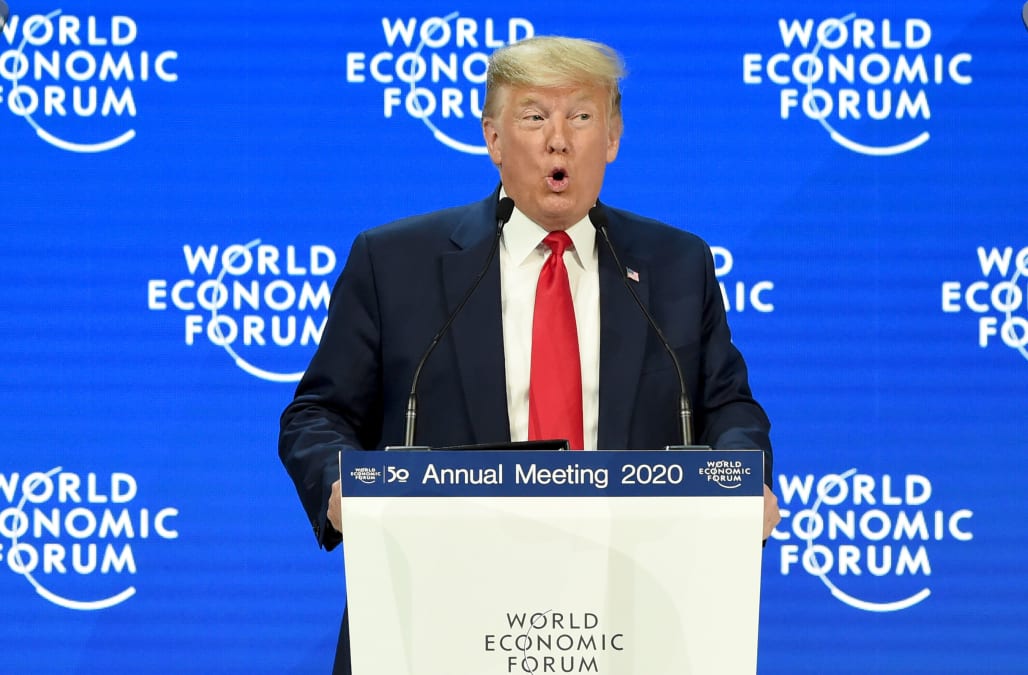 President Trump boasted Wednesday that his side in the impeachment trial has information that wasn’t shared with the House Democrats who pursued the investigation and brought the charges.

One of the impeachment managers presenting the case against the president observed that his remarks, at a press conference at the World Economic Forum in Davos, Switzerland, appeared to support one of the two charges he faces: obstruction of Congress by refusing to answer requests for documents or allow testimony by administration officials.

Trump, when asked by a reporter for his reaction to the impeachment trial that resumed Wednesday afternoon, praised the work of his legal team, adding that they had the advantage of possessing “all the material.”

“We’re doing very well,” said Trump. “I got to watch enough. I thought our team did a very good job. Honestly, we have all the material. They don't have the material.”

The White House has resisted turning over documents and allowing witnesses familiar with Trump’s dealings with Ukraine to testify in the investigation about whether the president pressured a foreign government to announce an investigation into former Vice President Joe Biden, who at the time was leading in polls for the Democratic presidential primary.

Trump’s legal team seemed underprepared on the opening day of the impeachment trial Tuesday, with his lawyer Pat Cipollone spending just three minutes on his opening remarks versus 50 minutes for Rep. Adam Schiff, D-Calif., who is leading the House team. Republican senators voted as a bloc repeatedly on Tuesday to kill amendments to the rules promulgated by Majority Leader Mitch McConnell to subpoena documents and witness testimony from the White House.

“The second article of impeachment was for obstruction of Congress: covering up witnesses and documents from the American people,” wrote Demings with a clip of the video. “This morning the President not only confessed to it, he bragged about it.”

The second impeachment article is focused solely on Trump’s refusal to cooperate with the investigation, reading in part, “In the history of the republic no president has ever ordered the complete defiance of an impeachment inquiry or sought to obstruct and impede so comprehensively the ability of the House of Representatives to investigate ‘high crimes and misdemeanors.’”

More from Yahoo News:
Schiff mauls Cipollone on impeachment trial's first day
Parnas said he is speaking out because he is afraid of William Barr
As impeachment trial nears, the battle turns to witnesses