Florida residents confused by unusual weather advisory: 'This isn't something we usually forecast' 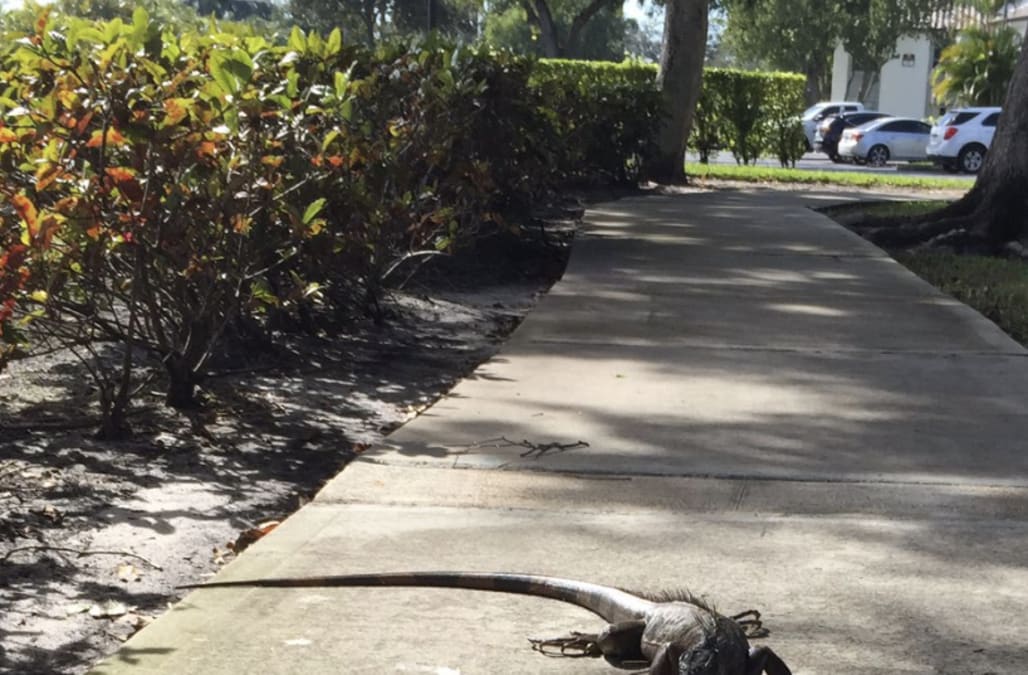 Floridians, perhaps more than anyone, are used to their fair share of completely insane, out-there news.

But on Tuesday afternoon, many of the state’s residents received a weather advisory for a problem they’d likely never even considered — it was raining iguanas.

"This isn’t something we usually forecast, but don’t be surprised if you see iguanas falling from the trees tonight as lows drop into the 30s and 40s. Brrr!" the National Weather Service’s Miami branch tweeted.

Jan 21 - This isn't something we usually forecast, but don't be surprised if you see Iguanas falling from the trees tonight as lows drop into the 30s and 40s. Brrrr! #flwx#miamipic.twitter.com/rsbzNMgO01

It may have sounded like a joke at first, but it’s a completely legitimate concern. The weather service went on to explain that because iguanas are cold-blooded, they become immobile when facing low temperatures.

"They may fall from trees, but they are not dead," the agency’s message added.

The news came as Florida faced uncharacteristically low temperatures during a spell of chilly weather that felt as cold as 15 to 20 degrees Fahrenheit in some areas. At least some Floridians weren’t deterred by the cold though, as numerous social media users shared their encounters with the falling reptiles.

"Know what this little [iguana] is dreaming of — probably Hawaii," one user tweeted, along with a video of a frozen (but not dead!) lizard.

Iguana know what this little🦎is dreaming of — probably Hawaii (No iguanas were harmed in the making of this clip) Just chillin’ 🥶 #FallingIguanas@OfficialJoelFpic.twitter.com/bqFzLMSYZO

Don't let your teaching style come across as cold as this Florida frozen iguana. Teach with fire! Keep it blazing! pic.twitter.com/3qQoZ2ZohS

One user even showed her adorable attempt to rescue one of the fallen animals, giving it a full winter outfit as it recovered.

"South Florida is waking up to cold temperatures and iguanas falling from the sky. Might as well make him comfy with blankie and hat while he thaws out," she tweeted.

South Florida is waking up to cold temperatures and iguanas falling from the sky. Might as well make him comfy with blankie and hat while he thaws out. #FloridaWinter#iguanapic.twitter.com/1w1cgtZ8vx

Still, others used the opportunity to make jokes.

Picture from my Mom this morning in South Florida. This was frozen iguana #2 of 7 on her morning walk. "Just another day in Paradise" was her quote. pic.twitter.com/MNttgzOI4d

Me, almost walking into an iguana playing Pokémon Go: Ah! Hi, buddy! Are you okay? Are you gonna move for me? I know, it’s really cold and you don’t like it.
Iguana: *doesn’t move*
Me: okay... I’ll go around you on the grass... *hops onto grate*
Me: oh, your friend is here too pic.twitter.com/Xn6oDaHtSP

Some Floridians even attempted to use the strange news as a business opportunity, with the Miami Herald reporting that several people had posted ads selling iguana meat in the past day.

The newspaper added that eating the animals is completely safe — provided they come from a "reputable processor." A tree might not qualify there, but who knows?