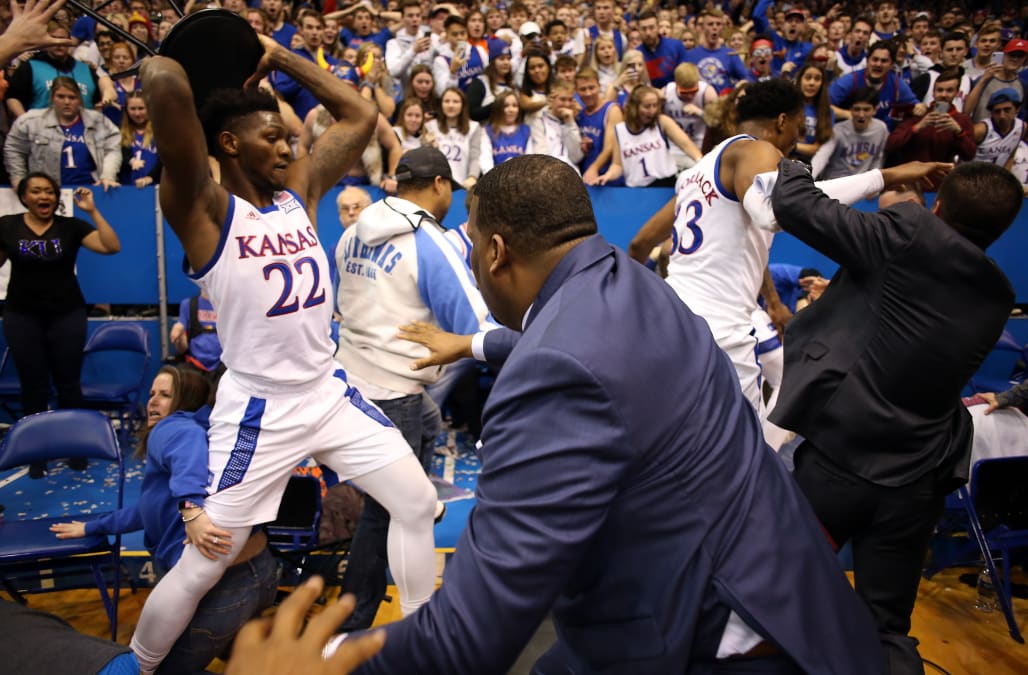 Kansas forward Silvio De Sousa has been suspended indefinitely by the school and for 12 games by the Big 12 for his role in a brawl at the end of the Jayhawks’ victory over Kansas State on Tuesday.

De Sousa picked up a chair in the middle of the brawl after it spilled into the floor seating area behind one of the baskets at Allen Fieldhouse. Someone got De Sousa to put the chair down before he used it as Kansas and Kansas State players fought amidst media and fans.

Self: "I have suspended Silvio De Sousa indefinitely pending the final outcome of the review by KU and the Big 12 Conference. As I said last night, we are disappointed in his actions and there is no place in the game for that behavior.”

De Sousa helped instigate the fight by standing over Kansas State’s DaJuan Gordon after blocking a layup attempt of Gordon’s. De Sousa went for the block after Gordon stole the ball from him as Kansas was trying to dribble out the clock in the 81-60 blowout win.

There has been no discipline announced yet for other players in the fight. Kansas’ Marcus Garrett and David McCormick could face discipline along with Kansas State’s James Love, David Sloan and others who played a role in the mess. They could face punishment from their respective schools and/or the Big 12.

Kansas promised consequences from the fight after the game Tuesday night.

(Photo by Hannah Foslien/Getty Images)
Up Next

“The conduct of a few of our student-athletes at the conclusion of [Tuesday night’s] game vs. Kansas State was simply unacceptable and not reflective of who we are,” Kansas athletic director Jeff Long said in a statement Tuesday night. “Coach Self and I will review the incident, along with the Big 12 Conference and Kansas State to determine appropriate consequences. There is no place for this conduct in college athletics or here at KU. I would like to apologize to the Big 12 Conference, Kansas State University, Gene Taylor, Bruce Weber and all fans for the lack of sportsmanship from members of our team this evening.”

The Big 12 announced Wednesday afternoon that De Sousa and three other players had been suspended for their roles in the fight.

“This kind of behavior cannot be tolerated and these suspensions reflect the severity of last evening’s events,” Big 12 Commissioner Bob Bowlsby said in a statement.  “I am appreciative of the cooperation of both institutions in resolving this matter.”

This isn’t the first suspension of De Sousa’s turbulent college career. He was handed a two-year ban by the NCAA after an Adidas representative testified in the high-profile FBI trial involving college basketball that he had paid De Sousa’s guardian during the player’s recruitment.

The suspension got cut in half in May after Kansas appealed and De Sousa was reinstated and able to play this season. Until this suspension by the school, De Sousa had played in all 18 of Kansas’ games in 2019-20 and has come off the bench in 17 of them. He’s averaging 2.6 points and 2.8 rebounds in just over eight minutes per game.