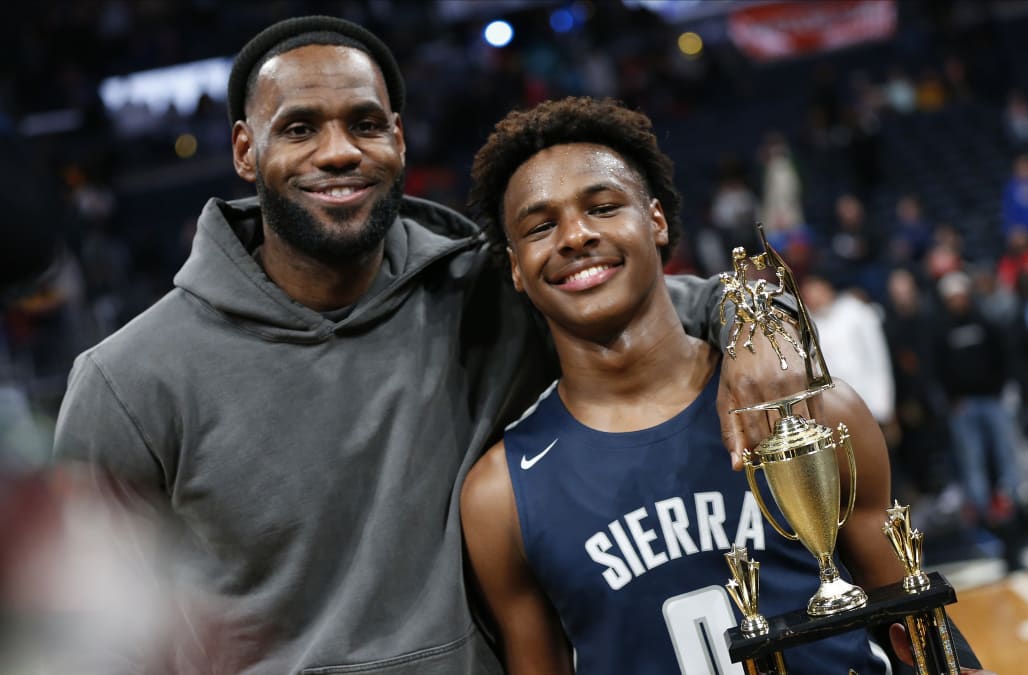 At just 15 years old, Bronny James is already taking the heat that comes with his name.

James — the eldest son of Los Angeles Lakers superstar LeBron James — was inbounding the ball for Sierra Canyon, his high school team, Monday when a spectator threw something at his back from the stands.

The referee immediately called for security to escort the person out of the arena in Springfield, Massachusetts.

Game was stopped and security was called out immediately to remove a fan that threw a yellow starburst or a piece of trash at Bronny James in the 3rd quarter.

Here's an angle from the stands.

Hey LeBron, just caught this kid throwing something at your son! Not cool! @KingJamespic.twitter.com/G93vHdZT2O

The elder LeBron James was actually on hand at Springfield College to watch his son's team take on Paul VI during Monday's Hoophall Classic, as his Lakers were scheduled to take on the Boston Celtics at nearby TD Garden later that evening.

.@KingJames is in the building to watch Sierra Canyon 🙌 pic.twitter.com/lc9dfY5KgO

After the game, the elder James took to social media to publicly defend his son and condemn the "disrespect" shown to the 15-year-old.

Know I got your back and front throughout it all! I’d die for you and your siblings. Never waver no matter what disrespect, hate, envy, jealousy, etc comes your way! Only push forward and continue to be the great kid/young man/person you are! Love you kid!! ❤️ #JamesGang👑

Hating has no age limit! 🤦🏾‍♂️. #JamesGang is build for it and well equipped. As we proceed 👑 https://t.co/6OzvGTxDEW

After the Lakers fell to the Celtics later that evening, LeBron spoke to the media about the incident:

"I didn't see it or hear it, actually. While I was on the opposite side of the floor, I did see the referee stop the game or stop the inbound, and the cop came up there," James said, per ESPN. "I didn't even know what happened until the video evidence showed me when I got here."

"It's just disrespectful, and it was a little kid too. I don't know how old that little kid was, so I don't know if he learned that on his own or if he learned it at home. Whatever the case may be, it's disrespectful. I wonder how old that kid is, if he is the age around Bronny's age [15] or [James' son] Bryce's age [12]. I'd like to see them try that while they're paying attention."

LeBron conceded that slights against Bronny often bother him and his wife more than they bother Bronny himself.

Bronny logged 13 minutes off the bench for Sierra Canyon, who lost to Paul VI 70-62.

"The bad thing about today is that I took two L's," LeBron told ESPN. "The James gang took two L's today, but there are always better days."