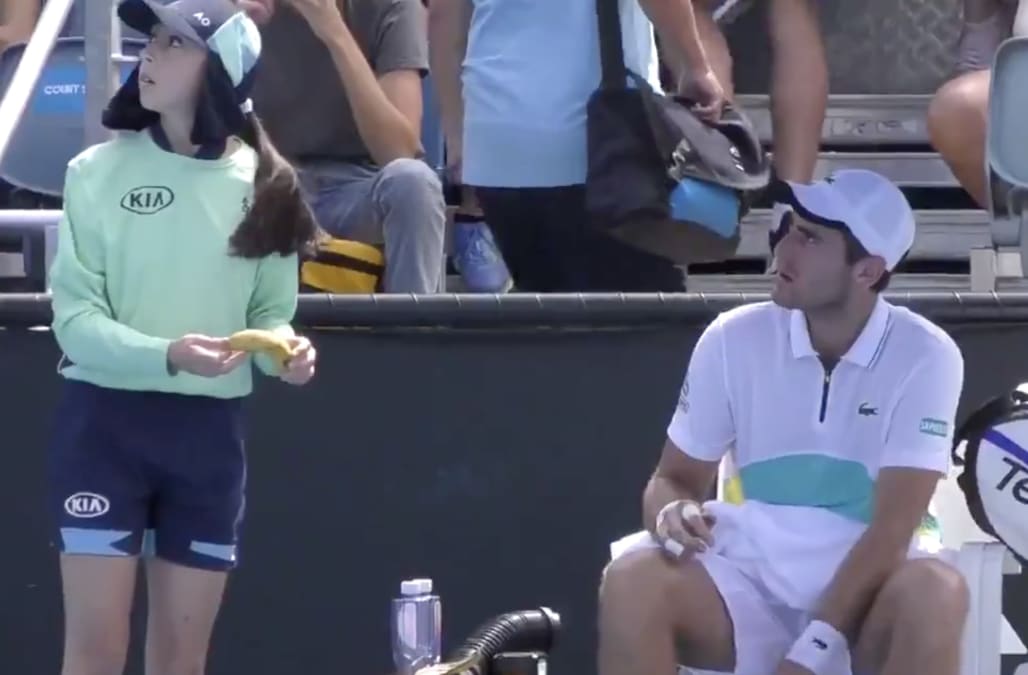 A French tennis player who was reprimanded by an umpire after he asked a ball girl to peel a banana for him has spoken out after the exchange went viral on Twitter.

Elliot Benchetrit, 21, was competing against Kazakhstan’s Dmitry Popko at the Australian Open on Saturday when he asked the girl, whose identity remains unknown, to peel the snack for him to eat.

Before the girl could complete the task, umpire John Blom reportedly called out to Benchetrit, telling him that "the ball girl was not my slave and I had to peel the banana myself," CNN reports.

Tennis reporter Alex Theodoridis shared a 15-second clip of the exchange on Twitter, which has since racked up nearly half a million views.

"So this is the moment where Elliot Benchetrit asks the ballkid to peel his banana," Theodoridis wrote. "I’m glad the umpire (John Blom) stepped in and told him off."

So this is the moment where Elliot Benchetrit asks the ballkid to peel his banana. I’m glad the umpire (John Blom) stepped in and told him off. pic.twitter.com/TK1GET68pG

"Too right. She's not a servant. She's there to do a job," one user responded. "He looked shocked when he was told to do it himself."

"What a nasty piece of work, this player is beyond rude," wrote another. "Well done to the umpire for spotting this prima donna and abusive behavior!"

Benchetrit later told CNN he could not believe the social media firestorm the banana incident set off.

The player, who ranks No. 231 in the world, claimed he merely asked the girl to help him since he had just put "some cream" on his hands in order to prevent sweat.

He also told the outlet he asked her to help him peel another banana once earlier in the match, but that the umpire didn't take notice until the second time.

"I could not believe that the umpire said that and I find incredible how this situation got out of control on social media without people knowing what really happened on court," Benchetrit claimed.

Benchetrit went on to beat Popko 4-6 6-2 6-3 in Saturday's match but ultimately lost to Japan’s Yuichi Sugita on Tuesday.

In 2017, Rafael Nadal was criticized as "lazy" for having a Wimbledon ball boy throw away his trash into a bin that the Spanish tennis star happened to be sitting right next to.

In an interview with ESPN, Erin Moreth, a 16-year-old two-time Wimbledon ball girl who witnessed the Nadal incident, claimed other ball kids were actually jealous of the interaction.

"I want to do things like that," Moreth said. "I love to help out because I feel like I'm playing a part in the match. And it means we don't have to stand still for as long. For me, that's so hard."