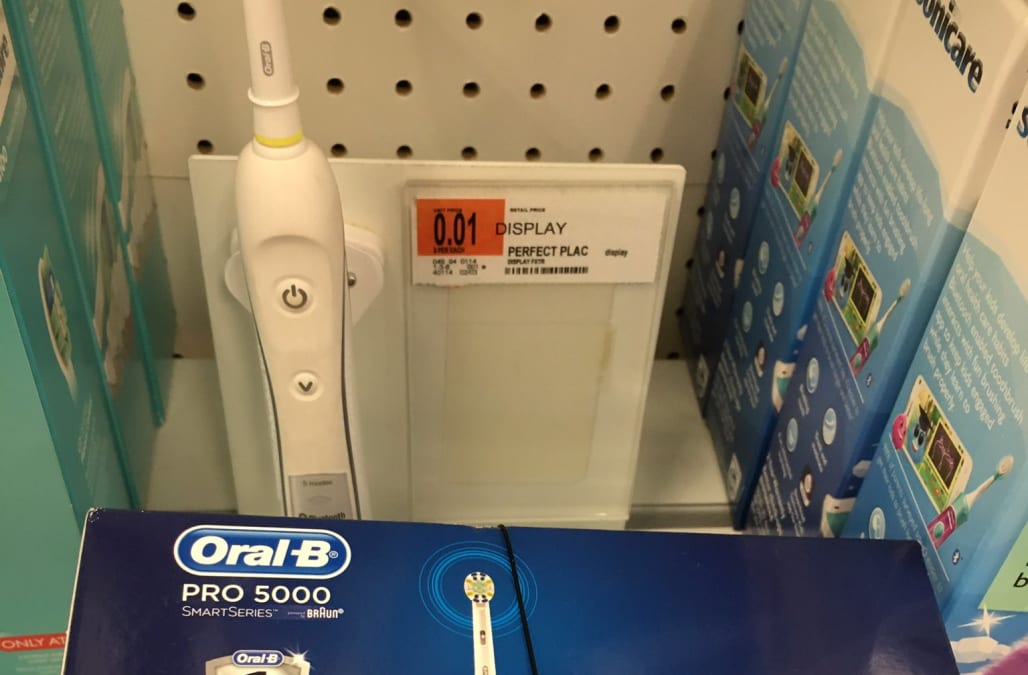 An angry journalist's rant about a Target manager who refused to sell him a toothbrush that was wrongly marked for one cent has recently gone viral on Twitter.

David Leavitt, who lists CBS, Yahoo and the Examiner as places of his publications, took to the social media site on Jan. 17 following an interaction with manager Tori Perrotti at a Swansea, Massachusetts store. According to reports, Perrotti declined to sell Leavitt an Oral N Pro 5000 electric toothbrush after it was mistakenly marked down to $0.01 from its original $89.99 price tag.

Leavitt took to Twitter to issue his complaint by sharing a photo of Perotti to his 210,000+ Twitter followers alongside a screenshot of the state's Pricing Law. Leavitt then tweeted that he called the police -- later clarifying that it was "the business number for the police" -- because Perotti was breaking the law by refusing.

"The police verified @target displayed the price of toothbrush for $0.01 The store manager Tori refused to sell me the toothbrush for displayed price," Leavitt wrote, adding that he'll need to sue the multi-billion dollar company and claiming that the police will testify in the case.

I have not been able to afford to go to a dentist in over three years. So yes I wanted a good toothbrush and was thrilled to see such an amazing prize on an @OralB but @target refused to honor it and now I have to take them to court

Leavitt then added that he hasn't been able to afford to see a dentist in three years and that he will be taking Target to court after they refused to sell him the toothbrush for "such an amazing price."

But it seems like Leavitt's now-viral rant, which has been re-tweeted thousands of times, backfired, with many Twitter users calling him "despicable" and a "bad person" for publicly shaming the young woman. Many were also quick to clarify that the $0.01 was clearly corresponding to the display, not the toothbrush.

Leave the girl out of this and take down her picture. You’re a bad person for doing this to her.

When I worked retail, we all knew to ring up products that were marked wrong for the price they were marked. It's common.

The tag doesn't say Oral B toothbrush. It says "Display". The packaged item's tag would be on the shelf.

Anyone who has worked retail knows a display price has a different barcode for inventory counting. It says display right there. God, you're an awful person. pic.twitter.com/JerZmXfYqi

This is embarrassing. Plastering her face online while trying to take advantage of a clear pricing mistake is simply unnecessary. If you're that set on a free electric toothbrush, then maybe start a GoFundMe. Better yet, don't.

Delete this, you absolute psychopath

This is DESPICABLE behavior. How do people like this have check marks? pic.twitter.com/L9xjR4dzUo

In fact, Leavitt's rant went so viral that critics users banded together to make Perrotti a GoFundMe to send the manager on vacation. It's since raised over $30,000.

“My first thought was I wish I had worn makeup to work that day,” she joked.

“It’s so often that people will take the picture and make a meme out of it in a mean way. So, it’s nice to see there’s publicity out of this to support me and my feelings.”

This isn't the first time the journalist has stirred controversy with his tweets. In 2017, he drew criticism for his response to the Manchester bombings, writing:

"MULTIPLE CONFIRMED FATALITIES at Manchester Arena. The last time I listened to Ariana Grande I almost died too.”

Although that initial tweet has now been deleted, he followed up with another post minutes later, writing: "Honestly, for over a year I thought an Ariana Grande was something you ordered at Starbucks."

And in 2018, Leavitt went viral once again after calling Anthony Bourdain an "asshole" for taking his own life.

More on his response to the Manchester tragedy in the video above.