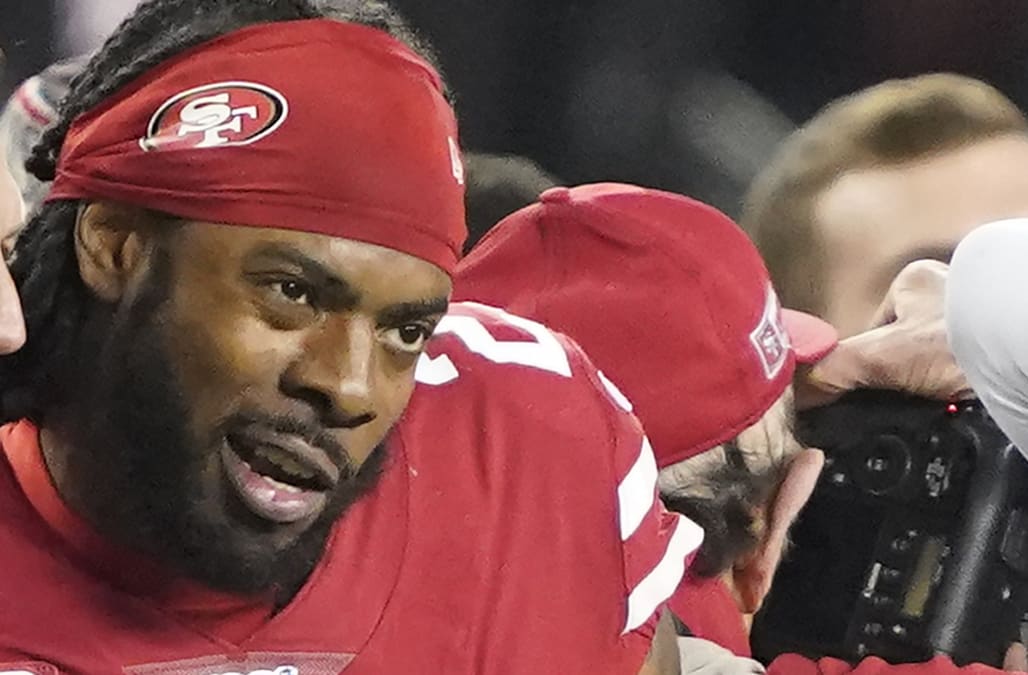 Richard Sherman going to the San Francisco 49ers wasn’t guaranteed to work out this well. Nothing in the NFL is.

Sherman was coming off an Achilles’ injury when he was cut by the Seattle Seahawks. He signed an incentive-heavy contract with a 49ers team that had won 13 games in its previous three seasons. He was 30 entering his first 49ers season, and most cornerbacks are already slipping at that age, even with two good Achilles tendons.

The move has worked out tremendously for Sherman and the 49ers. They beat the Green Bay Packers in the NFC championship game on Sunday night to advance to Super Bowl LIV. Sherman’s interception in the final two minutes was the final blow in the 37-20 win.

And when the celebration started on the field after the game, Sherman seemed overcome by the accomplishment.

Richard Sherman has an emotional moment

Sherman couldn’t hide his emotions as the NFC championship celebration happened around him.

Richard Sherman is heading to #SBLIV as a member of the #49ers 🙏 pic.twitter.com/a9tLElBZ4w

Sherman has been to two Super Bowls, both with the Seahawks. He won one. He is likely heading to the Pro Football Hall of Fame someday, and that wouldn’t have changed if the 49ers lost on Sunday.

But getting back to a Super Bowl with a new team, when there was plenty of reason to doubt if he could still be the same cornerback into his 30s coming off a major injury, is a heck of a story.

Sherman gave up a deep pass to Davante Adams, one of the few big plays Sherman has allowed all season. Revis, the former All-Pro cornerback, pounced. He brought up all the old criticisms of Sherman not shadowing opponents’ top receivers and spending most of his time in zone coverage.

All y’all think I’m throwing shade. I’m not. Just stating the man is not a pound for pound man to man corner. If you know the game of football he plays in a Cover 3 Scheme. He does not travel but traveling with a receiver is not for every DB. It’s a few on the corner list who can

That criticism is mostly ridiculous. Sherman has now played on two fantastic defenses that went to the Super Bowl. It makes no sense to suggest a team should change a successful defensive scheme so Sherman, who had an excellent season, can prove a point about being able to blanket receivers in man coverage.

Sherman shot right back at Revis after the game, with an appropriate level of fire:

I would go in on this has been but I have a Super Bowl to prepare for. Enjoy the view from the couch. Your ninth year looked a lot different than this. Lmao https://t.co/jj3pwWYhVa

Regardless of that old narrative about Sherman, he’s back in the Super Bowl. And that clearly means a lot to him.