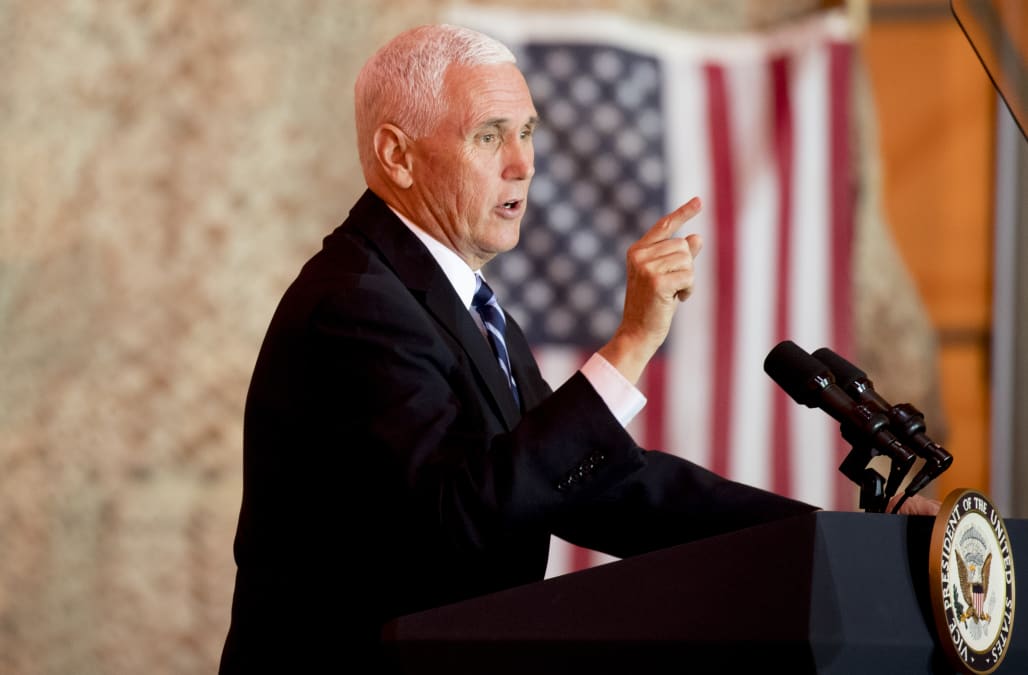 Among the many revelations in the spate of recent interviews by Rudy Giuliani’s associate Lev Parnas was a claim that Vice President Pence was “in the loop” regarding President Trump’s plan to pressure Ukraine to announce an investigation into former Vice President Joe Biden, the underlying act for which Trump has been impeached.

“I’m gonna use a famous quote by [Ambassador Gordon Sondland],” Parnas told MSNBC’s Rachel Maddow Wednesday night when asked about Pence’s involvement. “‘Everybody was in the loop.’ He couldn’t have not known.”

Parnas made the same point to CNN’s Anderson Cooper, who asked if Pence was aware that the administration was withholding military assistance to enforce its demand on Ukraine.

“Of course,” he replied.

Parnas, who is under federal indictment in the Southern District of New York on unrelated campaign finance violations, worked directly with Giuliani on the scheme, although neither of them had any diplomatic experience or official government position at the time. He gave investigators a letter from Giuliani to Ukrainian President Volodymyr Zelensky in which he said he was representing Trump in his private capacity. Giuliani told the New York Times last spring that his efforts were intended to help Trump’s campaign for reelection.

Parnas, who Trump claims not to know, although they have been photographed together numerous times, is not the only Trump associate to tie Pence to the Ukraine plot. U.S. Ambassador to the EU Gordon Sondland testified about a conversation he had with Pence ahead of a Sept. 1 meeting between Pence and Zelensky in Warsaw.

“I mentioned to Vice President Pence before the meetings with the Ukrainians that I had concerns that the delay in [U.S. military aid to Ukraine] had become tied to the issue of investigations,” Sondland said. “I recall mentioning that before the Zelensky meeting.”

"I don’t know exactly what I said to him," Sondland said. "This was a briefing attended by many people and I was invited at the very last minute — I wasn’t scheduled to be there. But I think I spoke up at some point late in the meeting and said it looks like everything is being held up until these statements get made and that’s my, you know, personal belief."

"Again, I don’t recall any exchange or where he asked me any questions. I think he — it was sort of a duly noted," Sondland replied.

On Thursday, the Government Accountability Office released a report that concluded that Trump and the Office of Management and Budget had violated the law by withholding $393 million in military aid allocated to Ukraine by Congress.

“Faithful execution of the law does not permit the President to substitute his own policy priorities for those that Congress has enacted into law. OMB withheld funds for a policy reason, which is not permitted under the Impoundment Control Act (ICA),” the GAO report stated. “The withholding was not a programmatic delay. Therefore, we conclude that OMB violated the ICA.”

Pence has steadfastly denied any knowledge of the quid pro quo with Ukraine.

“The vice president never had a conversation with Gordon Sondland about investigating the Bidens, Burisma, or the conditional release of financial aid to Ukraine based upon potential investigations,” Pence’s chief of staff, Marc Short, said in a statement released following Sondland’s testimony. “Ambassador Gordon Sondland was never alone with Vice President Pence on the Sept. 1 trip to Poland. This alleged discussion recalled by Ambassador Sondland never happened.”

Yet emails obtained by Just Security show that as concern over the White House delay on delivering military aid to Ukraine grew, officials at the Department of Defense saw Pence as a key player in resolving the impasse.

“The Ukrainian PM [sic] speaks with VPOTUS on Tuesday. We expect the issue to get resolved then,” Eric Chewning, chief of staff to then-acting Defense Secretary Mike Esper said in an Aug. 30 email to acting Pentagon comptroller Elaine McCusker.

Officials close to Pence say that while the vice president did urge Zelensky at his Warsaw meeting to step up efforts to root out corruption, he wasn’t involved in the effort to leverage aid for the benefit of Trump’s (and his own) reelection,the Washington Post reported.

The administration’s defenders in Congress have maintained that the aid was withheld over concerns about corruption, and eventually released in September when those concerns were satisfied. But that is belied by the fact that John Rood, undersecretary of defense for policy, had certified in May that Ukraine had met the anti-corruption benchmarks established by Congress, by taking“substantial actions to make defense institutional reforms for the purposes of decreasing corruption, increasing accountability, and sustaining improvements of combat capability enabled by U.S. assistance.”

According to Parnas, Pence’s cancellation was meant as a message.

"To my awareness, Trump called up and said to make sure Pence doesn't go there," Parnas told Maddow.

By this time, Parnas said he had already been telling Ukrainian officials that the key to the U.S. resuming military aid was for the government to publicly announce it was opening an investigation into the Bidens.

"That was the key to where we are today, because after that, take a look at what transpires," Parnas continued. "Within the next couple of days, all of a sudden they realize now — they get word because obviously when Pence cancels, they get word that Pence is not coming. So now they realize that what I was telling them was true."

While unlikely in a Republican-controlled Senate, Trump faces the prospect of being removed from office over what Democrats say is a plot to weaken a political rival. If that happens, Pence would become president.