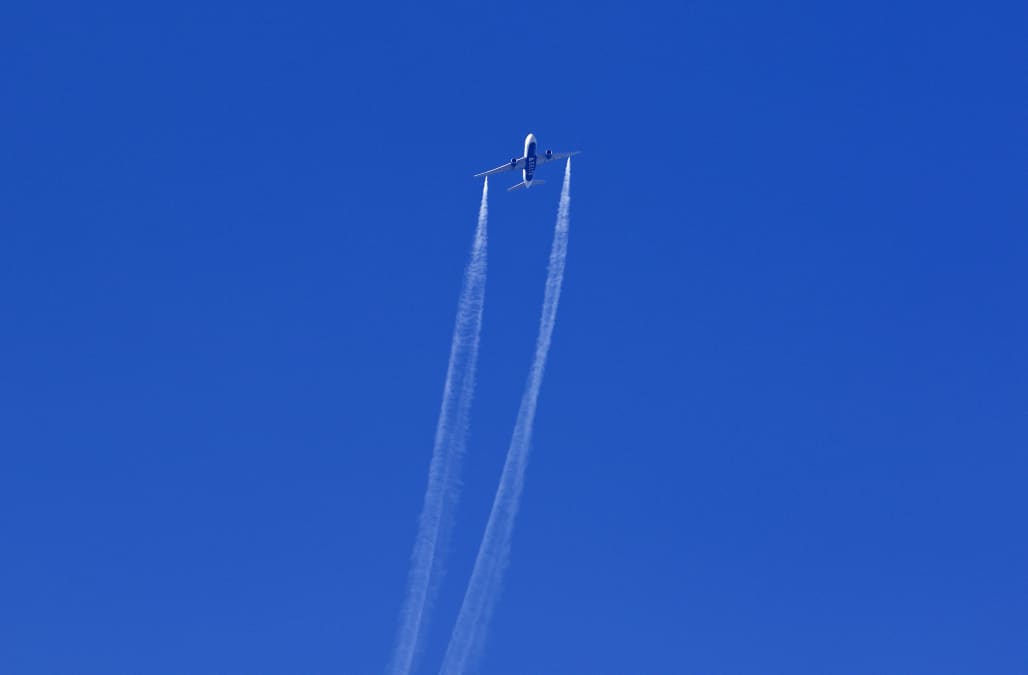 An otherwise routine outdoor recess was upended at seven Los Angeles schools this week when a Boeing 777 carrying more than 150 passengers dumped jet fuel on playgrounds and school yards, dousing at least 50 people, including 20 children.

Delta Flight 89, which was headed to Shanghai, experienced an engine problem that required it to return to Los Angeles International Airport less than 20 minutes after takeoff, officials said. During the course of the emergency landing, the airplane dropped fuel at around 2,000 feet, hitting several schools situated in its path.

As officials investigate the incident, aviation experts say they are puzzled by the “unusual decision” to dump fuel and that this type of maneuver, rare in populated areas, could have been avoided.

Fuel dumps occur only to reduce a plane's weight for unexpected landings because some have a maximum takeoff weight higher than their landing weight, said Captain John M. Cox, a former US Airways captain who runs Safety Operating Systems, an aviation safety consulting company.

In most cases, extra fuel weight is burned off during flight, but if a plane needs to land in an emergency, dumping allows the weight to be reduced quickly for a safer landing, Cox said. Delta said in a statement that the dump was “required as part of normal procedure to reach a safe landing weight.”

While the procedure is standard protocol for an emergency landing, it can be accomplished more safely if done at a high altitude, allowing the fuel to evaporate before reaching the ground, and it can be done over designated secluded areas.

At least six incidences of fuel dumps were reported last year, including in Orlando, New York, London and Canada. They all took place at high altitudes or on airport tarmacs, not on public places.

“The question investigators are going to ask is that if you’re going to dump fuel, why didn’t you advise air traffic control, and why didn’t you go where fuel dumping is approved, which would not be over a highly populated area,” Cox said. “If you had an on-board fire or something like that, it makes absolute sense to do that. But this was not that case.”

The crew of Delta Flight 89 did not inform air traffic control that they were going to dump fuel, according to a review of communications, the Federal Aviation Administration said Wednesday. Typically, air traffic controllers direct planes to appropriate fuel-dumping areas, the agency said in a statement.

"I'm just puzzled why these folks decided to do it this way, "said Ross Aimer, a retired United Airlines pilot and CEO of Aero Consulting Experts.

The engine malfunction was described as compressor stall, similar to a carburetor popping in a car with a backfire and loud bang, maybe even a small fire, but it's not a dire emergency, Aimer said.

"Even with this malfunction, it's surprising to me why the crew didn’t inform air traffic control of their intent to drop fuel, he said. "They had the time."

Aimer said another option could have been to land the plane heavy, which is safe in certain situations.

"It's not a big deal to land with heavy weight, and in this case it would have been fine because they had good weather along with a long and dry runway," he said. "Most of us would have just landed heavy because the airplane could sustain with one engine."

When planes land heavy, they must undergo an extra inspection to assess any damage, he said, adding it would not endanger passengers.

“It seems right now that they made a mistake,” he said. “I don’t know why they were in such a hurry because it appears this was not a type of emergency where you needed to get down immediately.” Aimer said the airline and pilots could face punishment, including fines or being ordered back to flight school, in addition to potential lawsuits from victims.

“Fortunately, no one was seriously injured,” he said. “Jet fuel is not a good substance, but you can get it on your skin and it's not going to severely damage it unless you’re doing it for a long time.”

Acute exposure to jet fuels has been associated with neurological effects including "headache, nausea, vomiting, dizziness, fatigue, irritability, problems with attention and memory,” according to a study by the National Research Council. Persistent effects can include peripheral neuropathy and behavioral changes, such as reduced performance on tests of attention and psychomotor speed.

At least 20 children were treated for minor injuries after being exposed to the jet fuel, according to the Los Angeles County Fire Department, which said more than 60 people from seven schools were treated.

“The kids were safe, the paramedics were called, firefighters, they were here within three minutes, four minutes, and the students that were experiencing symptoms were taken care of,” said Ramona Garcia, principal at Park Avenue Elementary School.

“It was unfortunate, very unfortunate, it was not an experience that we want for our students, or any of us, but thanks to the great support and the immediate response from school police, from firefighters in our district everybody was safe and we managed to pull through, and went home very tired but thank god everybody's fine," she said.

Cox said investigators will closely scrutinize each decision made by crew members leading up the the dump.

"At the end of the day, it’s the captain's decision. Once they declare an emergency, the sky belongs to them, and they are within their rights and responsibilities to make those decisions," he said. "But there are just a lot of questions that need to be answered."

More from NBC News:
Demi Lovato to perform national anthem at 2020 Super Bowl
A weekly routine to help prevent burnout at work
This is Claire McCaskill's No. 1 piece of advice for career re-launchers