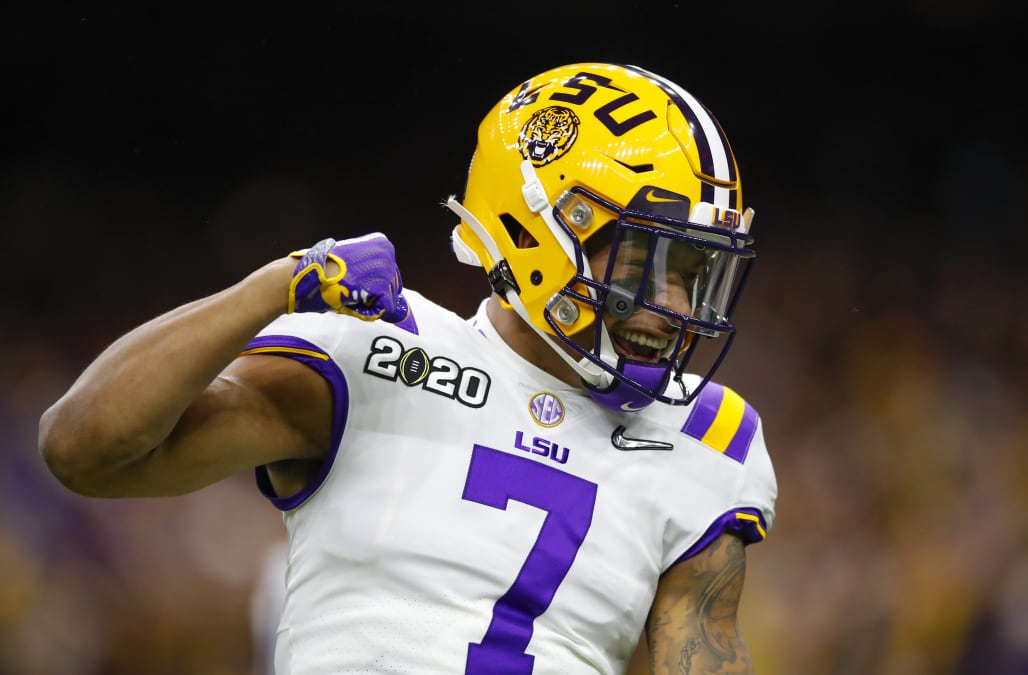 The national championship game being played on Jan. 13 only left a week of time before the deadline for underclassmen to declare for the 2020 NFL draft.

And in the days that followed LSU’s 42-25 triumph over Clemson, several members of Ed Orgeron’s team have decided to forgo their final season of eligibility and declare for the NFL draft. Some could

Tigers safety Grant Delpit, the Jim Thorpe Award winner, became the first player to make his NFL intentions known on Wednesday. Though he was hampered by injuries for much of the year, Delpit still was one of the best defensive backs in college football. Delpit was a three-year starter for Ed Orgeron in Baton Rouge, compiling 199 tackles, 17.5 tackles for loss, 24 passes defended, eight interceptions and seven sacks.

Yahoo Sports NFL draft analyst has Delpit going 21st overall to the Philadelphia Eagles in his most recent mock draft:

The Eagles badly need separators at receiver, but safety could be a need depending on whether Malcolm Jenkins gets the deal he wants or whether Rodney McLeod returns. Delpit spent time in several spots the past few seasons and could be penciled in as the deep safety or more up in the box if that’s not the role earmarked for Jenkins. Tackling was a problem at times for Delpit this season as he played hurt, but the Eagles need versatile defenders to stop the talented young QBs and runners in the NFC East.

Queen emerged as a starter at linebacker this season and had a big year, compiling 85 tackles, 12 tackles for loss and three sacks. For his career, Queen had 131 tackles and 17.5 tackles for loss.

Queen stepped into the “rover” spot in LSU’s defense vacated by star Devin White and performed quite well. He finished the season on a high note with eight tackles, 2.5 tackles for loss and half a sack against Clemson.

Yahoo Sports draft analyst Eric Edholm believes he could be a Day 2 pick:

Playing the “rover” spot manned in 2018 by eventual No. 5 overall pick Devin White, Queen started coming into his own in October and finished the year extremely strong. The converted running back is still developing his positional instincts, and he needs to wrap up better at times, but his physicality, coverage ability and hitting make the 6-1, 227-pounder a Day 2 possibility in April.

After catching 111 balls for 1,540 yards and 18 touchdowns as a junior, receiver Justin Jefferson confirmed to Yahoo Sports’ Pete Thamel that he is moving on to the next level.

“We just had a perfect year,” Jefferson told Thamel. “We won the national championship and set records. We had a lot of awards and did it with our team. I feel like it was the best way to go.”

Jefferson, who rose from two-star recruit to one of the best receivers in the country, joins a historically deep crop of receivers in the 2020 draft and could end up being a first-round selection.

Another leader of the LSU offense is moving on to the NFL. Clyde Edwards-Helaire, the Tigers’ standout running back, announced Wednesday night that he’s also declaring for the draft.

Edwards-Helaire is just 5-foot-7, but emerged as one of the best backs in the country. He finished the season with 1,414 yards and 16 touchdowns rushing to go with 55 catches for 453 yards.

Cushenberry didn’t see much action in his first two seasons before emerging as one of the top centers in the country over the last two seasons. In all, Cushenberry started 28 consecutive games and was a team captain in 2019 while anchoring an offensive line that won the Joe Moore Award as the best line in the nation.

Phillips has been a major contributor for the Tigers over the last two seasons. He was the team’s leading tackler in 2019 with 113 total tackles and also had 7.5 tackles for loss. He was the only Tiger who had more than 100 tackles.

That performance came after a season where he was LSU’s second-leading tackler behind Devin White. Phillips had 87 stops a season ago with 5.5 tackles for loss. He also returned his only interception of the season for a touchdown.

With Phillips and Queen both off to the NFL, LSU will have two starting linebackers to replace in 2020.

Charles joined his line-mate Cushenberry early Wednesday evening. Charles was a key contributor along LSU’s offensive line for the past three seasons and started each of the eight games he played in 2019.