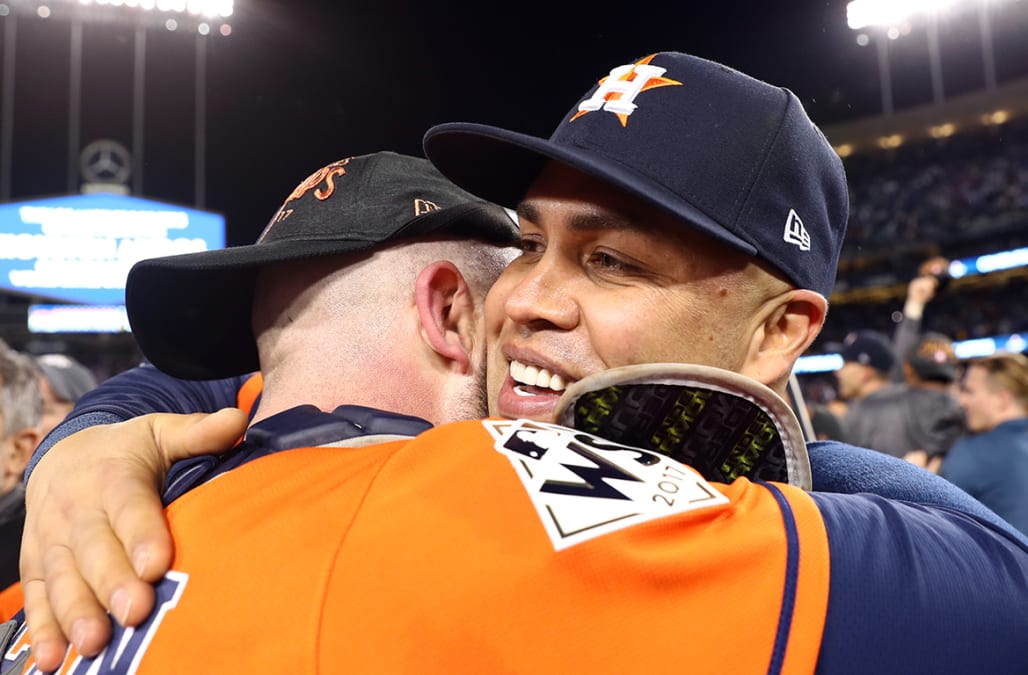 And there could be more to it. A new conspiracy theory about the Astros cheating has sent Twitter into a frenzy.

Before we jump down the rabbit hole, a few things to consider: Keep in mind that Twitter is Twitter, and sometimes it’s great for piecing together old footage that syncs up with pieces of information that are seeing the light of day and sometimes it’s a giant waste of time.

This could be just another conspiracy theory. The internet is full of them. But so much of the initial Astros cheating scandal played out on Twitter, Reddit and Jomboy’s YouTube videos — and MLB’s investigation proved it all to be true — so there might be a good reason to pay attention.

At the center of this new allegation is the notion that Astros players wore buzzers under their jerseys that would signal which pitch was coming. This was originally floated by Joel Sherman of the New York Post and Jomboy months ago, and again Thursday by a Twitter account that claimed to be (or was pretending to be) Carlos Beltran’s niece.

Look at these two tweets from the supposed Beltran niece:

Beltran's niece tweeting about the buzzers, which matches up with what Ive been told from about 5 different parties. pic.twitter.com/zla70bW0Wu

The Beltran family is saying that this is not Beltran’s niece, and that the account does not belong to anyone in the family. But the account also is said to have posted news about Beltran joining the Mets and departing the club before those developments were announced.

Regardless, MLB pitcher Trevor Bauer — who has beefed with Alex Bregman and other Astros in the past — tweeted that he’d heard the same thing about the buzzers.

I’ve heard this from multiple parties too, for what it’s worth... https://t.co/zDlp0x4bKs

This is where the new conspiracy theory gets good

Here’s where things go beyond just saying things on Twitter. Here’s a video of Jose Altuve telling his teammates not to rip off his jersey after the home run off Aroldis Chapman referenced in one of the Beltran niece tweets. One important note: This happened during the 2019 postseason, not during the 2017 season when the Astros were exposed for cheating.

Altuve making sure he keeps that jersey on (via r/nyyankees) pic.twitter.com/OO32FVFxTi

Here's Ken Rosenthal, who broke the news of the Astros cheating scandal, asking Jose Altuve why he was telling teammates not to rip his jersey off after the walk-off home run in Game 6 of the 2019 ALCS: pic.twitter.com/xoBGX159QG

And here’s a photo of Astros outfielder Josh Reddick where it looks like something is taped to his chest.

Reddick’s wife has already tweeted that this is a piece of confetti from the team’s celebration. And this second picture seems to jibe with that idea.

Also I’m not sure what picture we’re trying to claim is worse but the locker room one makes it OBVIOUS it’s confetti... that’s in the same exact place in his chest with the same exact chain around his neck

Might be time to hang it up, Sherlock Holmes. You’re not too good at this pic.twitter.com/w0E0oA3oKG

The latest news here is that MLB tells Joel Sherman of The Post: "MLB explored wearable devices during the investigation but found no evidence to substantiate it.”

As for Altuve, his agent Scott Boras told Sherman: “When this came up today, Jose Altuve immediately contacted me and this is his statement: ‘I have never worn an electronic device in my performance as a major league player.’ He has been transparent and truthful with MLB and their investigation.”

What does it all mean?

As conspiracy theories go, it’s all quite delicious. Especially after the last four days of MLB scandal. Do five tweets make a cheating scheme? Certainly not and they certainly don’t prove anything. But it might give this scandal another day of life on the internet.

As for the Twitter account that supposedly belonged to Carlos Beltran’s niece? It vanished Thursday afternoon — either deleted or suspended — but not before the conspiracy theories had begun to make their way around the Internet. And not before firing a shot at the Yankees too.

If you like conspiracy theories, Gary Sheffield’s son has another one.

Enough to make you wonder, isn’t it?

More from Yahoo Sports:
Carlos Beltran steps down as Mets manager because of sign-stealing scandal
Astros reportedly considering Dusty Baker, other big names as next manager