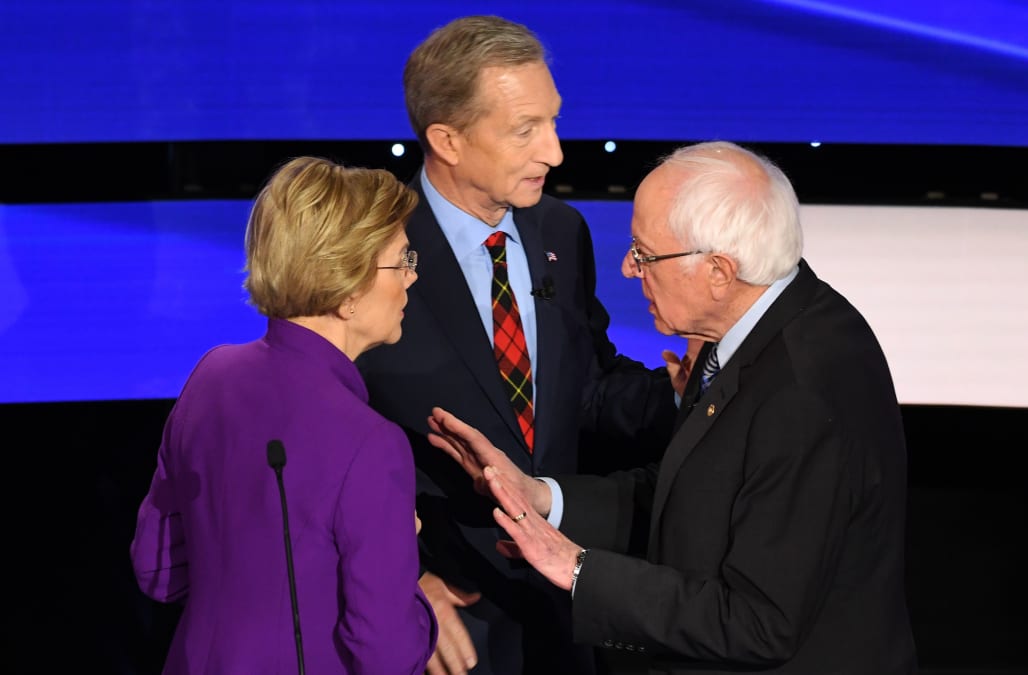 At Tuesday’s Democratic presidential debate, Sen. Elizabeth Warren and Sen. Bernie Sanders engaged in a “he said, she said” battle regarding a conversation the two progressive candidates had in 2018, when both were about to embark on their campaigns. Warren says Sanders told her a woman couldn’t win the presidency; Sanders has denied saying that.

CNN co-moderator Abby Phillip brought up the alleged discussion between the two senators.

“Sen. Sanders, CNN reported yesterday, and Sen. Warren confirmed in a statement, that in 2018 you told her that you did not believe that a woman could win the election. Why did you say that?” Phillip asked Sanders.

“Well, as a matter of fact, I didn’t say it,” Sanders responded. “And I don’t want to waste a whole lot of time on this, because this is what Donald Trump and maybe some of the media want. Anybody who knows me knows that it’s incomprehensible that I would think that a woman cannot be president of the United States.”

“I do want to be clear here. You’re saying that you never told Sen. Warren that a woman could not win the election?” she asked.

“That is correct,” Sanders said.

Turning to Warren, Phillip asked a question whose premise was that she didn’t believe Sanders — a rare implied rebuke of a major presidential candidate by a debate moderator.

“Sen. Warren, what did you think when Sen. Sanders told you a woman could not win the election?” Phillip asked.

“I disagreed,” she said. “Bernie is my friend, and I am not here to try to fight with Bernie. But, look, this question about whether or not a woman can be president has been raised, and it’s time for us to attack it head on.”

After the debate, Warren approached Sanders onstage, refused to shake his hand and confronted him over his depiction of their conversation.

"I think you called me a liar on national TV," Warren told Sanders according to a recording released by CNN.

"What?" The Vermont Senator responded.

"I think you called me a liar on national TV," she repeated.

"You called me a liar,” Sanders then countered. “You told me — all right, let's not do it now."

The diverging accounts of what was said behind closed doors at Warren’s Washington apartment between the two standard-bearers of the left wing of the Democratic Party rippled across social media. Some Sanders supporters took to Twitter to blast both CNN and Warren, who they accused of leaking what they claimed was a made-up story as a political hit job.

Elizabeth Warren lied, telling America that Bernie doesn't think a woman can be president, so Joe Biden can get the nomination.

Many Warren supporters, meanwhile, recoiled at what some saw as an ugly return of the so-called “Bernie Bro” mentality that marked the 2016 Democratic contest and, by withholding support from Hillary Clinton, helped elect Donald Trump. Singer John Legend called out the “nastiness” that erupted on Twitter following the debate.

Some of you Bernie supporters do quite the disservice to your candidate, who seems to be a great human being. Try not to drive people away with your nastiness. I will happily vote for him if he wins the primary. Chill

Another uncomfortable comparison arose from those who heard echoes of the #MeToo movement in the conflicting accounts Warren and Sanders offered of their 2018 conversation. GQ writer Julia Ioffe saw a parallel between Sanders fans who summarily dismissed Warren’s retelling and those who discounted claims of sexual harassment brought by women.

Still thinking about the Warren-Bernie squabble and I have a question to people who have accused Warren of lying: isn’t the lesson of #metoo and the last few years that we believe women and don’t call them liars?

Hell no that is not the lesson. It’s that women are entitled to open minds and the elimination of what used to be a knee-jerk dismissal of their claims. Due process for both sides. Believe all women is utter nonsense. (Hi, Duke LAX. Hi, Julie Swetnick.) https://t.co/PF1y1og2vM

Many conservatives seemed to relish the sight of two progressive candidates battling over such a hot-button issue. Dinesh D’Souza compared the episode to what he deemed the mistreatment of Supreme Court Justice Brett Kavanaugh.

I see Elizabeth Warren is trying out her own version of Christine Blasey Ford on Bernie Sanders. It’s the Kavanaugh scheme all over again: a surprise hit, the gender card, media collusion, no genuine corroboration. I say disbelieve anything of this sort without hard evidence

With dueling hashtags like “#BelieveWomen” and “#NeverWarren” keeping debate going on social media, some Democrats theorized that Russian bots were at work once more, attempting to sow chaos and diminish the prospects for the ultimate Democratic nominee.

For others, the real villain behind the controversy was the media outlet that had hosted the debate and first published the story about what Sanders is alleged to have told Warren about the viability of a female presidential candidate.

Opinion: @CNN tried to help moderates by reporting on a "progressive feud" between Warren and Sanders. In true leading fashion, they both did a good job of not backing down and redirecting to issues that matter. The American people are ready for real change; the mass media is not

More from Yahoo News:
3 key takeaways from the first Democratic debate of the year
Trump campaign is fundraising off Soleimani killing
Sanders in a tie with Biden and Buttigieg in new poll