Graphic T-shirt on sale outside Trump rally turns heads: 'Do they know he doesn't speak' 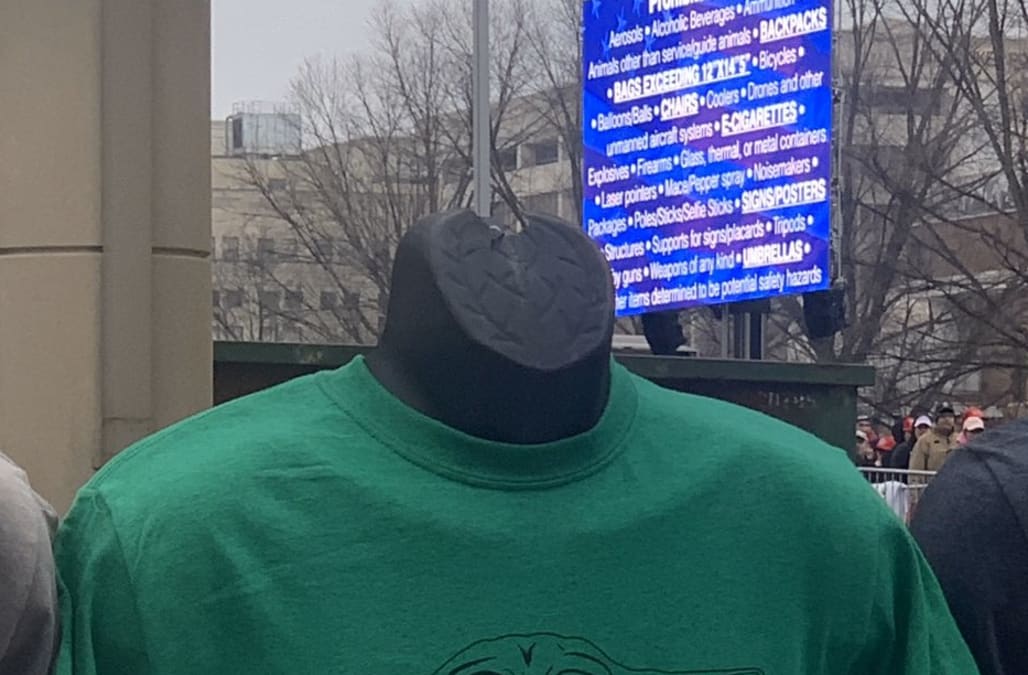 A graphic T-shirt on sale outside of President Donald Trump's Tuesday night rally in Milwaukee has Baby Yoda and Disney fans up in arms.

A photo of the tee, which features a print of the little green "Mandalorian" character paired with the words "Great America Keep," was captured and shared on Twitter by ABC News' 2020 campaign reporter Will Steakin.

The jumbled phrasing depicted on the tee is a play on Trump's 2020 campaign slogan "Keep America Great," which has been reorganized to match the original Yoda's famously reversed speaking pattern.

The print was seen nestled between two other purchasable Trump shirts — one featuring the president's hair on top of a skull, plus another adorned with an American flag and the words "Trump 45, suck it up buttercup."

Twitter users, particularly those fond of Baby Yoda and Disney — which owns the character and the Star Wars franchise — were quick to comment on the political appropriation of the character.

"Do they know he doesn't speak," joked one user.

do they know he doesn't speak

"Well he went to the dark side fast," added another.

Well he went to the dark side fast.

Others insinuated that Disney's lawyers might take great exception to the MAGA-inspired design.

"Disney lawyers are scary," wrote one user, with another tagging the company and urging it to "go get 'em."

Steakin later took to Twitter to share that the green shirt was actually not official Trump 2020 campaign merchandise, adding that it apparently wasn't flying off the shelves, as the person selling it hoped it would.

"The vender said it’s 'not selling as good as I thought it would,'" Steakin said.

Although Trump supporters may not be feeding into the Baby Yoda crazy, it seems like a great deal of social media users have been sucked right in by the character's adorably big eyes and fuzzy green head.

Tons of black-market Baby Yoda merchandise is available for purchase online as we speak — from stuffed animals and mugs to T-shirts and car decals.