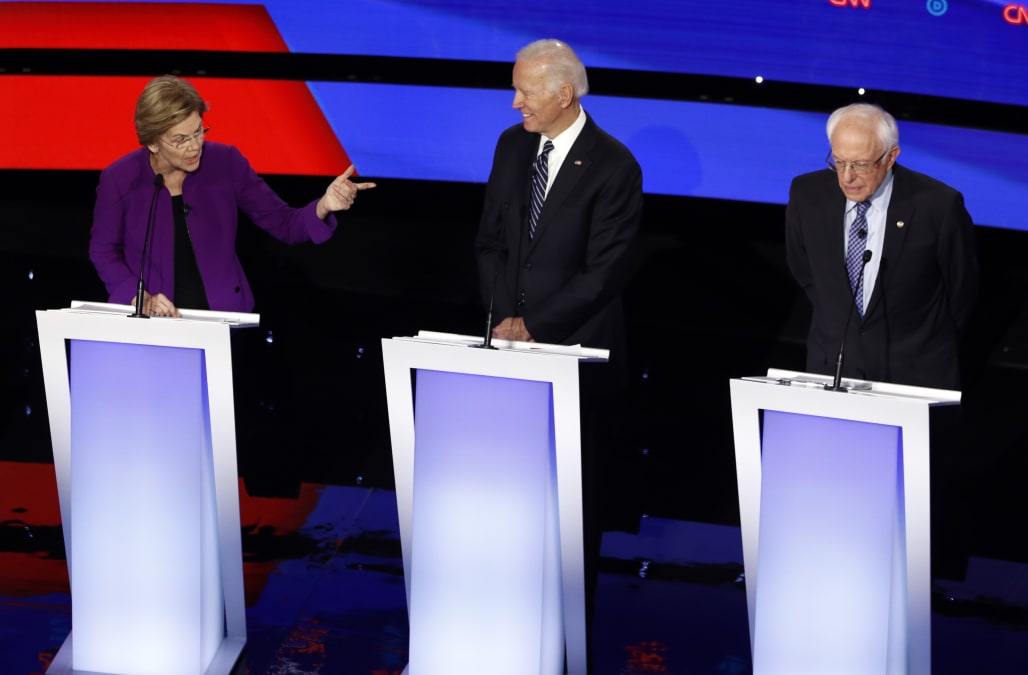 Des Moines, Iowa —Sen. Bernie Sanders again denied allegations that he told Sen. Elizabeth Warren in 2018 that a woman would not be elected president during a private meeting in December 2016.

“Well, for a matter of fact I didn’t say it,” Sanders replied to CNN moderator Abby Phillip during the seventh Democratic presidential primary debate at Drake University in Des Moines. “Let me be very clear - if any of the women on stage or any of the men win the nomination [...] I will do everything in my power to make sure they are elected.”

Warren was not asked if Sanders made those remarks, and instead was simply asked how she felt after the Vermont senator’s reported comment.

“I disagreed,” she said. “Bernie is my friend and I’m not here to try to fight with Bernie. But look, this question of whether or not a woman can be president has been raised and it's time for us to attack it head on,” replied Warren.

“So, can a woman beat Donald Trump? Look at the men on this stage. Collectively they have lost 10 elections. The only people on this stage who have won every single election that they’ve been in are the women: Amy and me.”

Sanders’ alleged remarks were first reported by CNN a day before the first Democratic debate of 2020 and only a few weeks before the decisive Iowa caucuses. Sanders’ campaign surrogates as well as the senator himself fervently denied the remarks on the record Tuesday afternoon, while, at the time, Warren’s campaign declined to comment.

"It is ludicrous to believe that at the same meeting where Elizabeth Warren told me she was going to run for president, I would tell her that a woman couldn't win," Sanders said in a statement. "It's sad that, three weeks before the Iowa caucus and a year after that private conversation, staff who weren't in the room are lying about what happened. What I did say that night was that Donald Trump is a sexist, a racist and a liar who would weaponize whatever he could. Do I believe a woman can win in 2020? Of course! After all, Hillary Clinton beat Donald Trump by 3 million votes in 2016."

For several hours after initial reporting, Sanders’ surrogates and allies appeared on cable news and took to Twitter to defend their candidate. In the meantime, hashtag “Refund Warren” —a call for ActBlue to refund donations made to the Warren campaign — trended on Twitter.

Late Monday evening, Warren finally went on record to clarify her perception of the events at a private dinner at her Washington, D.C. home.

“Among the topics that came up was what would happen if Democrats nominated a female candidate. I thought a woman could win; he disagreed," she said in the statement, but declined to get into further specifics including Sanders’ exact wording.

“I have no interest in discussing this private meeting any further because Bernie and I have far more in common than our differences on punditry,” she said.

A few other candidates chimed in amid the controversy.

Hawaii Rep. Tulsi Gabbard, who was not present at the private dinner, tweeted that she, too, had a meeting with Sanders before she announced and the two “had a nice one-on-one conversation and I informed him that I would be running for President. In that meeting, he showed me the greatest respect and encouragement, just as he always has.”

Businessman Andrew Yang wrote that watching the drama between the candidates unfold was “upsetting.”

“We have big problems to solve and both want to solve them,” Yang wrote. “I’m sure that’s where they would want our attention focused too.”

In the weeks approaching the caucuses, public tension between the campaigns have escalated, as some have wondered if the “non-aggression pact” to not attack one another during the primary, coincidentally made at the same December dinner in question is null and void.

Over the weekend, Politico reported that Sanders’s volunteers were instructed to say that Warren supporters were "highly-educated, more affluent people who are going to show up and vote Democratic no matter what” and “she's bringing no new bases into the Democratic Party.” Warren later said she was “disappointed to hear that Bernie is sending his volunteers out to trash me."

In response, Sanders claimed he “never said a bad thing” about his “friend” and fellow running mate.