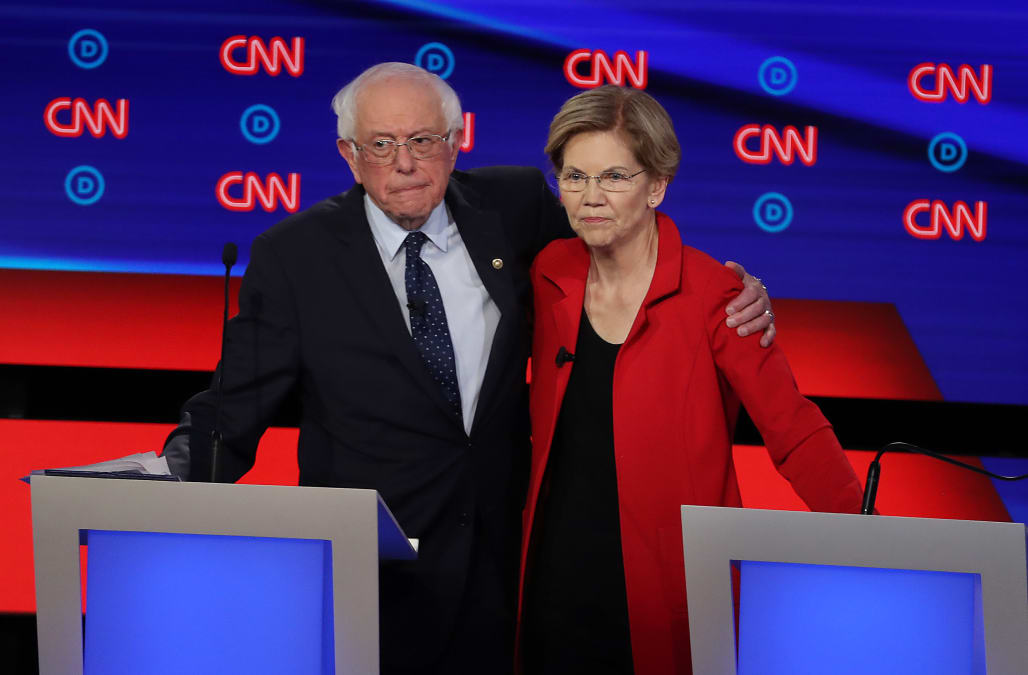 Elizabeth Warren has a problem. Its name is Bernie Sanders.

In case you couldn’t tell, the oft-mentioned and surprisingly durable “nonaggression pact” between the two progressive heavyweights appears to have collapsed in the final days before the pivotal Iowa caucuses.

First the Sanders camp distributed a script instructing its volunteers to deride Warren as an upper-crust candidate incapable of expanding the Democratic base. Then Warren accused Sanders in a fundraising email of “sending his volunteers out to trash me.” Then CNN reported late Monday that Sanders once told Warren that he did not believe a woman could win the presidency. Sanders denied the charge, calling it “ludicrous” and insisting that “staff who weren't in the room are lying about what happened.” Warren said otherwise. “Among the topics that came up was what would happened if Democrats nominated a female candidate,” she recalled in a statement. “I thought a woman could win; he disagreed.” The predictable firestorm — Was Sanders was being sexist? Is Warren smearing him unfairly? How will this affect the primary? — is still raging on Twitter.

Perhaps Warren and Sanders will patch things up at Tuesday’s Democratic debate in Des Moines. Perhaps not. Either way, the eleventh-hour hostilities reflect a key dynamic that a few conciliatory words won’t change: If Warren doesn’t defeat Sanders in Iowa, her path to the nomination will narrow greatly; long-term, there’s likely only enough room in the race for one major progressive alternative to moderate pacesetter Joe Biden. But if Warren does beat Bernie in Iowa, she could still win it all.

Here’s how that could happen.

In recent days, much of the media spotlight has shined on Sanders, and with good reason. The gold-standard Des Moines Register poll, released Friday, showed Sanders leading in Iowa for the first time, with 20 percent of likely caucusgoers naming him as their first choice for president. Nationally he has been in second place since Thanksgiving, and he is roughly tied for first in polling averages of Iowa, New Hampshire and Nevada. He’s secured key progressive endorsements and raised more money than any other Democrat. Some experts have even called him “the frontrunner.”

Yet Warren has also gotten some good news lately (even if that good news has gotten less attention). And it’s the kind of good news that suggests a candidate who’s already come back before — most famously after she flubbed that whole Native American DNA test gambit — might be able to come back again.

Take the famously accurate DMR poll. The Register’s previous survey, conducted in November, showed Pete Buttigieg leading the field at 25 percent; in its latest survey, Buttigieg has dropped nine points to 16 percent. That means Warren, at 17 percent, is now ahead of Buttigieg and Joe Biden (who trails both of them at 15 percent).

The margins are close, but if you dig deeper into the DMR data, you’ll see that Warren may be in even better shape than those topline numbers indicate. That’s because the Iowa caucuses aren’t one big election; they’re actually 1,679 smaller elections, one in each precinct. And there’s a twist: whenever a candidate doesn’t reach the state’s 15 percent “viability threshold” on the first round of balloting in a particular precinct, their supporters have to disband and "realign" with another candidate (or go home). If the Register’s numbers are right, only Sanders, Warren, Buttigieg and Biden would currently meet the threshold statewide; the other 19 percent of likely caucusgoers who preferred a lower-polling candidate would have to realign in the room.

That means second choices are crucial. And guess who’s currently Iowa’s top second-choice pick, according to the Register poll? Warren. Her 16 percent on that measure edges out Buttigieg (15 percent), Biden (12 percent) and, most importantly, Sanders (12 percent), giving her the highest combined first-and-second-choice score in the field (33 percent). Warren’s net favorability rating (+46 percent) is also higher than Buttigieg’s (+44 percent), Sanders’ (+37 percent) and Biden’s (+29 percent). It’s quite possible, then, to imagine a scenario in which Sanders leads on the first ballot and Warren overtakes him after realignment. In fact, the Register’s pollsters have already calculated that Warren would gain a point if Cory Booker’s supporters were reallocated after his decision Monday to drop out — and Sanders wouldn’t gain at all.

If Warren were to win Iowa — or, at a minimum, finish ahead of her main progressive rival — she would likely benefit from the element of surprise; Sanders’s surge has raised expectations for his performance while lowering them for Warren. That boost would then breathe new life into Warren’s campaign in New Hampshire and elsewhere, giving her at least a shot at the nomination.

All of this, of course, is speculative — a theory will only bear out if Warren’s team actually capitalizes on the opportunity in Iowa. Yet there’s reason to think they may be making the right moves in the final phase of the campaign. Organization is more important in Iowa than anywhere else. It’s what gets your supporters to come out and caucus for hours in a school gymnasium on a cold February weeknight; it’s what helps them persuade other candidates’ supporters to jump ship during realignment. And by most accounts, Warren has the biggest, broadest and most embedded ground game in the state — with more resources devoted to far-flung rural precincts, where you can win delegates with fewer raw votes.

Then there’s Warren’s closing argument to consider. For a year, the policy-centric Massachusetts senator spoke almost exclusively about “big structural change” and how she has “a plan for that.” She still does. But recently she has placed less emphasis on how she will govern and more emphasis on how she can win.

“We all saw the impact of the factionalism in 2016, and we can’t have a repeat of that,” Warren warned in response to the story about the Sanders script. “Democrats need to unite our party and that means pulling in all parts of the Democratic coalition.”

Meanwhile, she has taken to revisiting her 2012 Senate victory over Scott Brown on the stump. “I will be the only person on that debate stage… who has beaten a popular incumbent Republican any time in the past 30 years,” she said Monday on Pod Save America, an influential progressive podcast. “He had about a 65 percent approval rating… He just beat a very qualified woman. … But I got in that race. I started out way down, I just kept fighting, and I ended up beating him by seven-and-a-half points.”

In one sense, both of these arguments are intended to defuse Warren’s greatest weakness: voters’ fear, rekindled by her awkward embrace of Medicare for All, that she can’t beat Trump. But they are also implicit contrasts with Sanders, who was, you’ll recall, a participant in the “factionalism” of 2016 and has never defeated a “popular incumbent Republican” himself. Warren isn’t just saying she’s electable. She’s saying she’s more electable than Sanders.

In other words, there’s some evidence that Warren is, in fact, best-positioned to unify the Democratic Party. We’ll find out Feb. 3 whether Iowans agree.