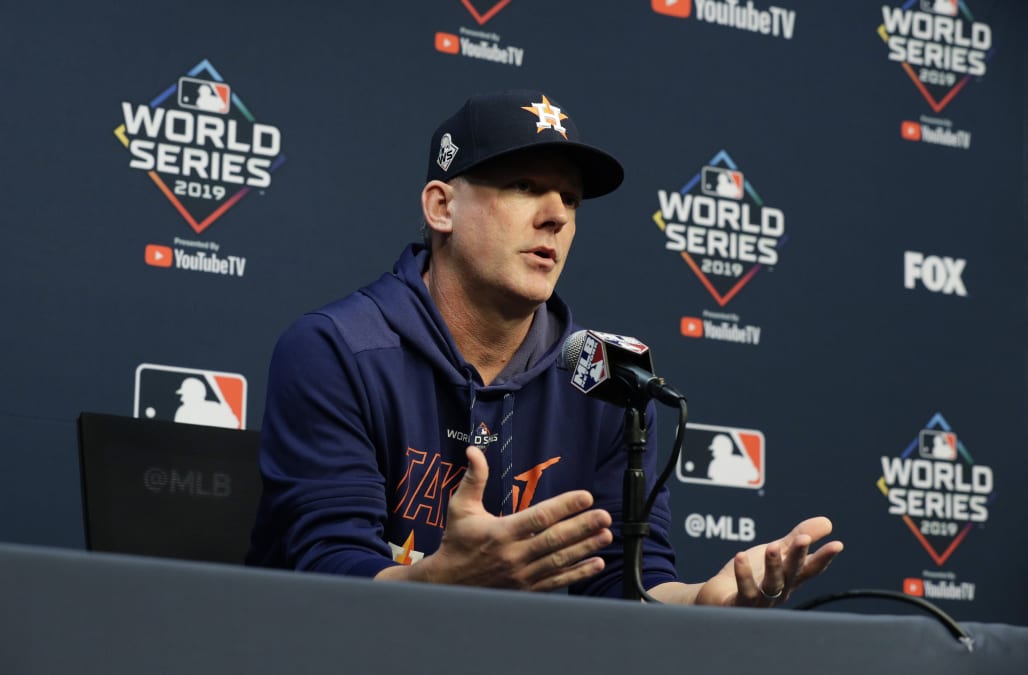 Major League Baseball revealed the results of its investigation into the Houston Astros’ sign-stealing schemes Monday, handing down momentous suspensions and sparking upheaval in Houston.

With more ripple effects from the sign-stealing scandals set to hit the league, here are five takeaways from today’s news.

MLB has an inconsistent history when it comes to issuing harsh penalties for wayward teams, but took a clear stance in the sign-stealing arena.

They threw the book at the Astros — or, maybe in this case, the trash can. Astros GM Jeff Luhnow and manager A.J. Hinch were suspended for a year, and the team was stripped of its top two picks in each of the next two drafts and fined $5 million.

MLB’s investigation produced a nine-page report on the Astros cheating during their 2017 World Series run. They interviewed 68 witnesses, including 23 current and former Astros players, and painted a picture of a sign-stealing system that was far out of bounds of what the league allows.

Baseball allows sign-stealing if it’s done the old-fashioned way, if a runner on second base can figure out the opposing team’s signs. The Astros were doing something far more sophisticated and dependent on technology, which MLB has made clear is a no-no. The Astros used a camera in center field to send real-time footage of the other team’s signs to a TV near their dugout, then worked to figure out the signs. Once they decoded them, they’d bang on a garbage can nearby to signal to hitters if a breaking ball was coming.

This specifically happened after commissioner Rob Manfred had warned teams about using technology to steal signs. The severity of the punishment, Manfred’s statement said, was because he warned the Astros and other teams not to try things like this.

The only thing worth questioning is whether players deserved to be punished. MLB decided to punish the decision-makers and leaders in Houston, even though their investigation indicated that this was mostly a player-led scheme.

Nonetheless, this isn’t like what we’ve seen in the past, where teams pay a fine and lose a draft pick. This was MLB sending a strong statement about the integrity of the game and minding the commissioner’s warnings. — Mike Oz

2. Houston’s culture is a problem. Even Rob Manfred says so.

The first step is admitting you have a problem. First, because it should proceed even well-intentioned attempts to eradicate the problem, lest they look more like attempts to distance yourself from problematic elements. In October, when Astros assistant GM Brandon Taubman harassed a group of female reporters in the midst of a clubhouse champagne celebration, the Astros initially refuted the story and lashed out at the reporter. When that tactic didn’t work, Taubman was fired — even before an MLB investigation determined his culpability — and Luhnow set about insisting that Taubman’s outburst was “not a cultural issue.”

I disagreed. So does Rob Manfred, it seems. The league ruled on the Astros’ systematic sign stealing, laying out the sanctions levied against the team including one-year suspensions for Luhnow and Hinch. On top of the unprecedented punishments, one of the more interesting details was an editorializing note toward the end of the report specifically criticizing the team’s culture, which Manfred described as “very problematic” and “one that valued and rewarded results over other considerations.”

An hour into their season-long suspension, Hinch and Luhnow were fired by Astros owner Jim Crane. Perhaps this was the right thing to do. Asked about the cultural condemnation by the commissioner, Crane responded, “I don’t agree with that.”

This was the wrong thing to say.

MLB’s investigation was thorough, interviewing 68 witnesses and scouring “tens of thousands of emails, Slack communications, text messages, video clips, and photographs.” If it concluded the team has a cultural problem, an owner who was seriously dismayed by these revelations and is serious about righting the ship would want to know more about what’s contributing to this, not wave the issue away.

A culture that does not condone the kind of behavior perpetuated (or at least left unchecked) by Hinch and Luhnow should have taken the accusations that the problem extends beyond those two individuals seriously. Firing them so fast looks an awful lot like doubling down on the insistence that there’s nothing more to see here. Removing the tainted parties makes sense from both an ethical and public relations standpoint. Refusing to reckon with it beyond that just looks like a cultural problem. — Hannah Keyser

3. You likely won't be seeing Red Sox manager Alex Cora for a while.

Already the obvious common thread between sign-stealing allegations against the 2017 Astros and 2018 Boston Red Sox, current Boston manager Alex Cora — who served as the Astros bench coach in 2017 — is identified by MLB's report as a direct conspirator. It says he stole signs via the replay review room in early 2017 before spearheading the infamous and far more intensive method involving a live video feed and trash cans. Simply, he reads as the most intentionally mischievous character in this elaborate plot.

Manfred held off punishing Cora for now despite directly implicating him, as the league's investigation into the 2018 Red Sox started later and is ongoing.

But given the bans handed down to Luhnow and Hinch, who did not directly create the scheme, and an apparent pattern to Cora's ways, a suspension of more than a season seems to be a given. In firing Luhnow and Hinch, Astros owner Jim Crane also likely foreshadowed Cora's most immediate fate. Whether the Red Sox officially fire him or await MLB's suspension, there is about to be a vacancy in Boston. — Zach Crizer

As the Astros manager, Hinch seemingly could have put a stop to all of it if he had simply spoken up. Hinch, who joined the Astros in 2015, disapproved of the scheme so much that on two occasions he physically damaged the TV monitor in the tunnel to the point it had to be replaced, the report says. He once verbally voiced his concern about using the replay phone in the scheme, yet he never told the players to stop even though he believed it to be “wrong and distracting.”

Hinch did not design the system, nor did he put it into use, but one of his job requirements is to make sure players are living up to expectations. That includes abiding by MLB rules and regulations, and for that Hinch was punished while players were not. It was a strong message from MLB as to responsibility and though Hinch “expressed much contrition” after the fact, he had to be held accountable for lacking in management. — Cassandra Negley

Asked Monday, in the aftermath of the punishments and after he had fired Luhnow and Hinch, Crane maintained this cheating scandal “absolutely” didn’t taint his team’s 2017 World Series win. While fans in other cities might have opposing views, there was nothing in the MLB ruling that diminished their championship.

So you have to ask the question of whether all of this — the scandal, the fallout, the collateral damage — is worth winning a World Series?

Let’s think of it this way: The Astros lost four draft picks, $5 million and their GM and manager two years after winning the World Series. If you survey 29 other teams, do you think they’d trade all those things for a World Series title? No doubt quite a few would. They botch draft picks all the time, misallocate money frequently and are always firing managers and execs in the pursuit of championships.

Is it worth it? Unless MLB decides to vacate their title, it’s hard to say it wasn’t. — Mike Oz