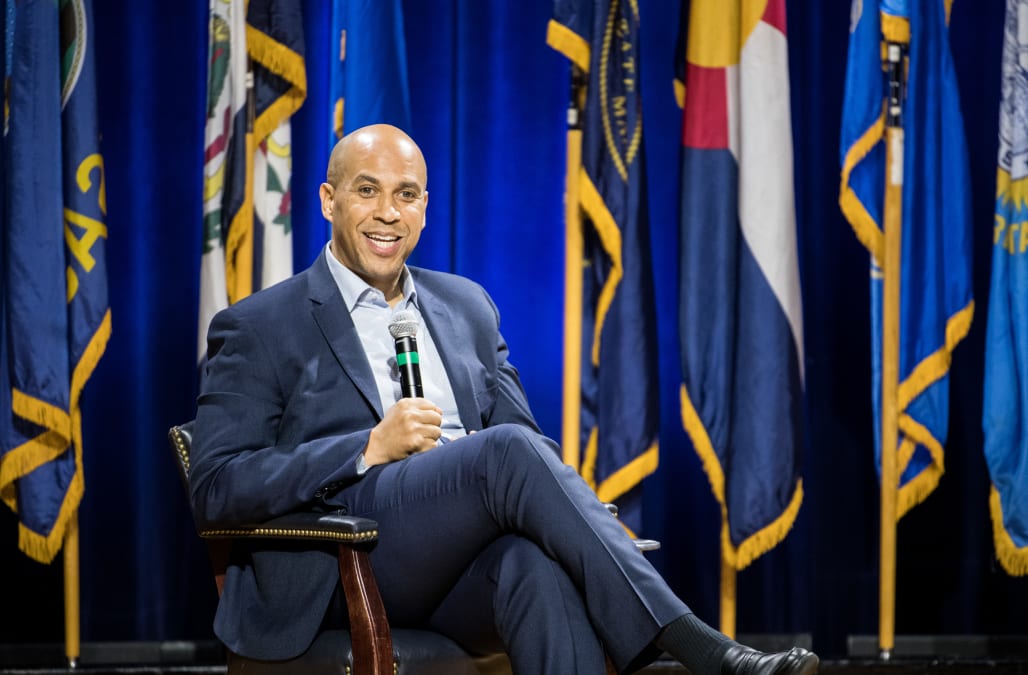 Sen. Cory Booker (D-N.J.) on Monday suspended his campaign for the Democratic presidential nomination, saying he no longer has a path to victory in the race to challenge President Donald Trump.

“Our campaign has reached the point where we need more money to scale up and continue building a campaign that can win – money we don’t have, and money that is harder to raise because I won’t be on the next debate stage and because the urgent business of impeachment will rightly be keeping me in Washington,” Booker wrote in an email to supporters.

Booker’s departure from the race, which comes not long after former Housing and Urban Development Secretary Julian Castro dropped out, means only a handful of candidates of color remain in the race — and none are considered serious contenders for the nomination. The next Democratic primary debate, scheduled for Tuesday, will feature only white candidates.

Booker, a former mayor of Newark, New Jersey, officially entered the race on Feb. 1, 2019, the first day of Black History Month. Throughout his campaign, he routinely spoke more pointedly about the plight of Black Americans than any other candidate. In a video kicking off his run, Booker introduced himself by discussing his parents’ experience with housing discrimination as they sought a middle-class life for him and his brother in New Jersey. Booker had a similar tact with issues like gun violence and education, speaking broadly about the impact these issues have on all Americans while also discussing the ways they acutely affected Black people.

The Booker campaign also largely shaped the primary’s debate around gun violence. The senator was the first candidate to call for a federal gun licensing program, something more than a dozen other candidates eventually said they supported.

But in polls, Booker’s support hovered stubbornly in the low single digits, and the candidate struggled to broaden his support among Black voters. Although Booker frequently drew praise from activists and polling indicated many Democratic voters had a favorable opinion of him, he struggled to convince voters he should be their first choice.

Booker repeatedly tried to draw distinctions between himself and former Vice President Joe Biden. In a July debate, Booker criticized Biden, the front-runner for the Democratic nomination, for having endorsed the 1994 crime bill seen by many as a driver of mass incarceration.

“This is one of those instances where the house was set on fire and you claimed responsibility for those laws,” Booker said. “And you can’t just now come out with a plan to put out that fire. We have got to have far more bold action on criminal justice reform.”

But Booker occasionally struggled to strike the right tone with some of his zingers. In another volley with Biden, he accused the former vice president of not knowing the facts about his record on criminal justice.

“Mr. Vice President, there’s a saying in my community: ‘You’re dipping into the Kool-Aid and you don’t even know the flavor,’” Booker said. The line earned raucous applause in the debate hall, but it was received coolly online.

Booker often found himself in a political never-never land of sorts, stuck in the middle of ideological war between Sen. Bernie Sanders (I-Vt.) and Sen. Elizabeth Warren (D-Mass.) on the left and Biden and host of other candidates in the center. He tried to focus his campaign on love and unity, a message that was sometimes out of sync with the fighting approach many Democrats hope a nominee would bring to a general election battle with Trump.

With his exit, Booker returns to the Senate, where he is expected to defend his seat in the 2020 election.