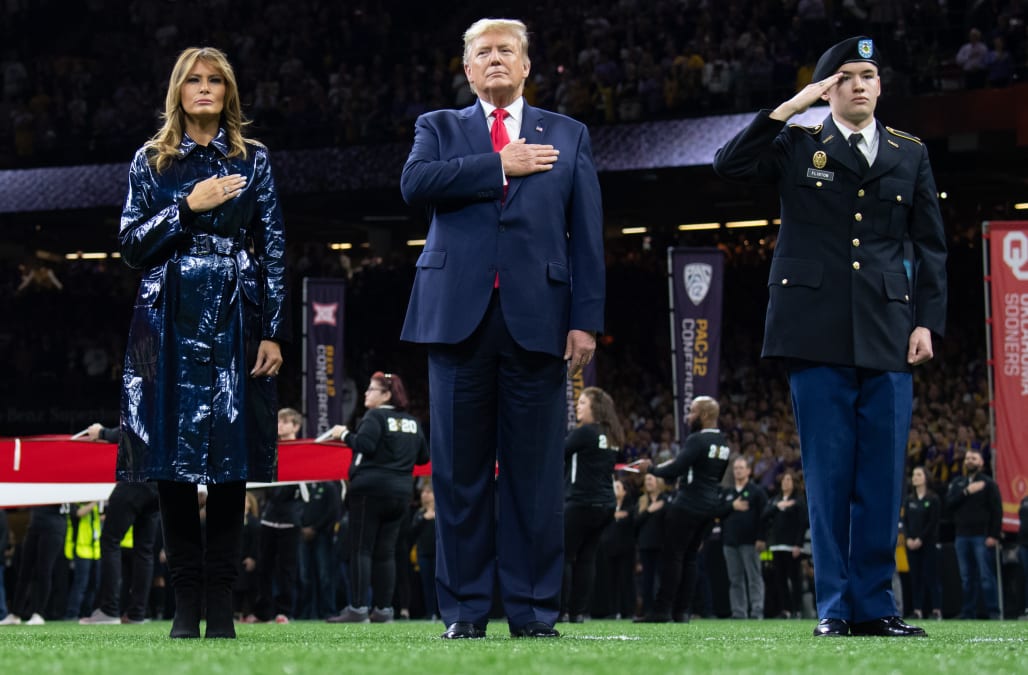 NEW ORLEANS — For the third time in three months, President Donald Trump has made a public appearance at a college football game. And for the third consecutive trip, he’s been greeted by raucous cheers.

How the crowd reacted when President Donald Trump walked in to the National Championship Game. pic.twitter.com/1a0nyLrYNV

Trump arrived at the College Football Playoff title game between No. 1 LSU and No. 3 Clemson at the Superdome on Monday with the expectation of a warm welcome. Both schools are located in states that have voted red in recent presidential elections, and Trump received cheers from the Southern fan bases when he was introduced before the national anthem to a massive ovation and chants of “U-S-A! U-S-A!”

Trump attended part of one of the regular season’s marquee games between LSU and Alabama in Tuscaloosa. He also appeared at the annual game between Army and Navy, which was held in Philadelphia. Both also greeted him with distinct ovations.

“He sees it as a harmless way to show his face,” said John Couvillon, a Louisiana-based pollster and political consultant. “The thing that he appreciates is that in Southern states, particularly in Louisiana, is that football and politics get equal billing in terms of being the top sport.”

With a few muddled greetings coming during an appearance at the World Series in Washington D.C. (heavy boos) and a UFC fight in New York City (mix of cheers), Trump’s allegiance to college football has left him undefeated in terms of reception. Trump won the votes of all the states in the SEC footprint and won 58 percent of the vote in Louisiana and 55 percent in South Carolina, where both the schools playing in the title game are located.

“[The appearance] cements his relationship with his core constituency,” said Howell Raines, the former New York Times editor and political commentator for MSNBC. “Certainly, he couldn’t be safer politically in South Carolina and Louisiana.”

Clemson has visited Trump in the White House twice after winning the title, with Dabo Swinney’s team visits coming in 2017 and 2019. Trump phoned his congratulations to LSU coach Ed Orgeron after LSU blew out Oklahoma, 63-28, in the College Football Playoff semifinals.

“I think Ed Orgeron is the most popular man in Louisiana right now, rivaled only by his quarterback [Joe Burrow],” Raines said. “I think to the degree Trump can cozy up to Ed, it’ll be helpful.”

Trump’s appearance at the title game comes during a turbulent time of his presidency, which led some to speculate that he’s using the game as a distraction from the impeachment hearings and political tension with Iran. Raines joked that one of the hallmarks of the Trump presidency was his ability to “change the subject,” sometimes as quickly as with a tweet.

“This is a harmless diversion,” Couvillon said. “He gets to show his face at something that’s not involving impeachment or Iran or the presidential election.”

This marked Trump’s second appearance at the College Football Playoff title game since taking office. His first appearance at Alabama’s overtime victory over Georgia in January of 2018 is mostly remembered for being a logistical nightmare. The combination of biblical rains, a new stadium in Atlanta and Trump arriving early stranded thousands of fans outside in the downpour for extended periods of time. Trump did not stay for that game’s climactic conclusion, as Alabama won on a Tua Tagovailoa walk-off touchdown pass.

An imported circle of metal detectors lined the entrance to the Superdome on Monday night. Secret Service officers lined up behind the metal detectors and the list of things fans couldn’t bring in ranged from drones to selfie sticks to hairspray in an aerosol can.

“We will do everything possible to make access to the stadium convenient for fans,” College Football Playoff executive director Bill Hancock told Yahoo Sports before the game.

The College Football Playoff did not change the scheduled entrance time for the president, as fans began entering at 4 p.m. CT for the 7 p.m. game.