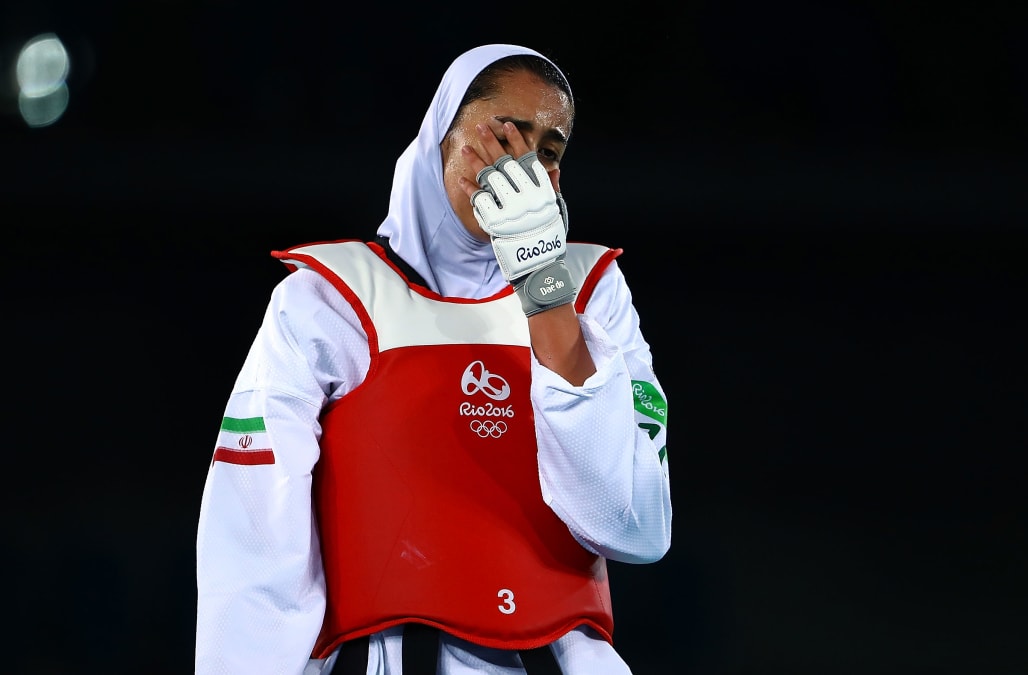 The only woman from Iran to win an Olympic medal announced over the weekend that she has permanently left the country, accusing the government of “injustice” by exploiting Iranian women as political tools.

Kimia Alizadeh posted a statement Saturday on Instagram explaining the anger and sadness behind her decision to defect from Iran, apparently planning to settle in a European country.

“Should I start with hello, a goodbye or condolences?” the 21-year-old taekwondo fighter wrote in Farsi. “I am one of the millions of oppressed women in Iran who they have been playing with for years.”

Alizadeh became Iran’s first woman to win an Olympic medal when she won the bronze in the 57kg taekwondo competition in the 2016 summer games in Rio de Janeiro. Her Instagram post from Saturday was accompanied by a black-and-white photo of her from the medal ceremony, holding her face in her hands while covered by the Iranian flag.

“I am so happy for Iranian girls because it is the first medal, and I hope at the next Olympics we will get a gold,” Alizadeh told reporters at the time of her win. “I wish I had made history with a gold medal. I thank God that I made history with my bronze to pave the way for other Iranian women.”

The athlete’s announcement comes amid tensions in Iran that escalated after the United States assassinated Gen. Qassem Soleimani, one of Iran’s top military commanders, who was significantly influential across the Middle East. Iran’s government is also facing backlash from the world and its own people after admitting it mistakenly shot down a Ukrainian passenger jet. The plane crash killed all 176 people on board, including more than 140 Iranians and dual citizens.

Alizadeh did not specifically refer to those recent events in her post. Instead, she expressed anger at the regime for taking credit for her Olympic achievements while simultaneously humiliating her. The athlete recalled in her post an instance in which an official told her that “the virtue of a woman is not to stretch her legs!”

“They took me wherever they wanted. I wore whatever they said. I repeated every sentence they ordered me to say. Whenever they saw fit, they exploited me,” she wrote, adding that the regime attributed her athletic success to their management methods, which included forcing her to compete in a hijab. All women in Iran are required by law to wear a hijab in public.

“They didn’t care about me. None of us mattered to them, we were tools,” Alizadeh wrote. “My troubled spirit does not fit into your dirty economic channels and tight political lobbies. I wish for nothing else than for taekwondo, safety and for a happy and healthy life.”

It was unclear from the post where Alizadeh had defected to, though she included that “no one invited me to Europe.” The athlete has previously indicated that she wanted to settle in the Netherlands, according to Radio Free Europe.

Some Iranian officials attempted to squash reports that Alizadeh’s defection was due to disagreements with the regime.

Mahin Farhadizadeh, a deputy Iranian sports minister, said the athlete was defecting in order to pursue educational opportunities, according to Reuters. Seyed Mohammad Pouladgar, who leads Iran’s Taekwondo Federation, alleged Friday that Alizadeh was traveling as part of a vacation paid for by the Iranian government, according to CNN.

But Alizadeh’s post on Saturday confirmed the rumors that she is leaving because she did not want to be used as a propaganda tool for Iran’s government.

“The sweet and sad people of Iran, I did not want to climb the steps of progress based on corruption and lies. I accept the pain of homesickness because I did not want to sit at the table of hypocrisy, lies, injustice and flattery,” she wrote. “This decision is even harder than winning the Olympic gold, but wherever I am, I remain the daughter of Iran.”

Alizadeh made the BBC’s list of the 100 most “inspiring and influential women from around the world” in 2019. A spokesperson for the U.S. State Department applauded Alizadeh for her decision to defect.

“She has defected for a life of security, happiness, and freedom,” spokesperson Morgan Ortagus tweeted Saturday, adding that Iran “will continue to lose more strong women unless it learns to empower and support them.”

It’s unclear whether Alizadeh will try to compete in the Olympic games in Tokyo this summer for a different country.

Alizadeh is the latest Iranian athlete to stop representing the country in recent months. In October, Olympian and world champion judo fighter Saeid Mollaei refused to go back home to Iran over safety concerns after he ignored orders from the International Judo Federation to pull out of fights to avoid competing against Israelis. Pourya Jalalipour, an Iranian para-archer who was set to compete in this year’s Olympics, left Iran in July to seek asylum in the Netherlands.