Go for it? Pete Carroll says Seahawks never considered it on key 4th down vs. Packers 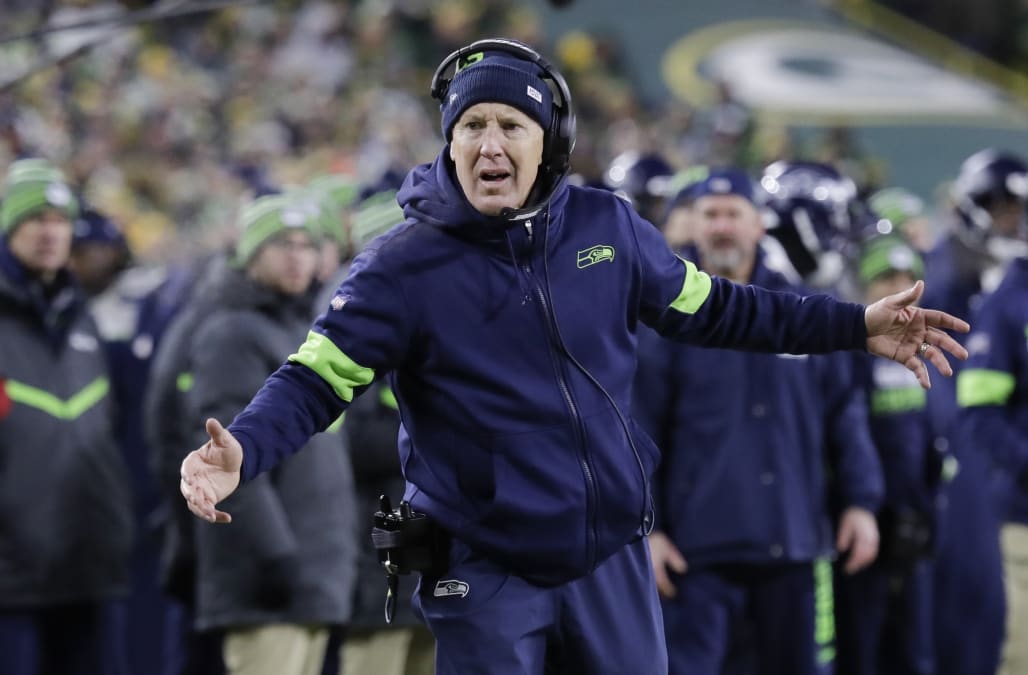 It’s the NFL playoffs, and you know what that means. Some team, somewhere, is going to make a questionable decision to punt.

This year, it was the Seattle Seahawks, and the decision could not have come at a more pivotal time in the divisional around against the Green Bay Packers on Sunday.

After a Russell Wilson sack that backed the Seahawks to 4th-and-11 at their own 36-yard line with around three minutes left, head coach Pete Carroll faced the choice. Punt, and let his defense, ranked 18th in the league in DVOA, try to stop Aaron Rodgers or try to gain double-digit yards with Wilson and his offense, ranked fifth in the same metric.

Carroll chose the former. The numbers didn’t love it.

With a Surrender Index of 4.32, this punt ranks at the 86th percentile of cowardly punts of the 2019 season, and the 83rd percentile of all punts since 2009.

After even more wizardry from Rodgers and a questionable spot on the ensuing drive, the Seahawks lost 28-23.

Asked about the fateful punt after the game, Carroll said going for it was never even an option. He also chose not to explain why the Seahawks let the clock go from 3:22 to 2:41 between Wilson’s sack and Michael Dickson’s punt.

Pete Carroll said he gave no thought to going for it on 4th-and-11. Punting was always the move from there. Odds too great to pick up a first down at that distance.

I asked if there was a lack of urgency to get punt team out there and he didn’t want to go down that path.

Not a great look, even when you ignore the surrender indexes and win expectancies.

The Seahawks gained little by punting

At that point, field position didn’t really matter for the Seahawks’ situation. Sure, a fourth-down failure on offense would have made a game-sealing touchdown much easier for the Packers, but you know what else would have — and did — seal the game? Two first downs. The clock was more of an enemy than field position.

The best case the Seahawks were looking at when they punted was a Green Bay turnover. Unfortunately, they were playing a team that turned the ball over the second-fewest times this season (13 giveaways) and could purposefully make it even more unlikely with runs and conservative passes (Rodgers did air one out; it did not go the Seahawks' way).

The second-best (reasonable) scenario was a Packers three-and-out, at which point the Seahawks would have gotten the ball back about where they were originally, with two minutes left and potentially no timeouts. If the Seahawks had gone for it and failed, that scenario gives the Packers a likely field goal, but keeps it a one-possession game.

The Packers moving down the field at all, be it from their own 20-yard line or the Seahawks’ 36-yard line, carried the same outcome. A loss for Seattle.

Above all, the Seahawks faced a choice. Did they trust their MVP candidate quarterback — a known magician with arguably the league’s best deep ball — to make an 11-plus yard completion to DK Metcalf or Tyler Lockett, or their defense to get a quick stop or turnover against a team that doesn’t turn the ball over?

Carroll chose the latter. It wasn’t the primary reason his team lost, but it sure narrowed the ways in which it could win.