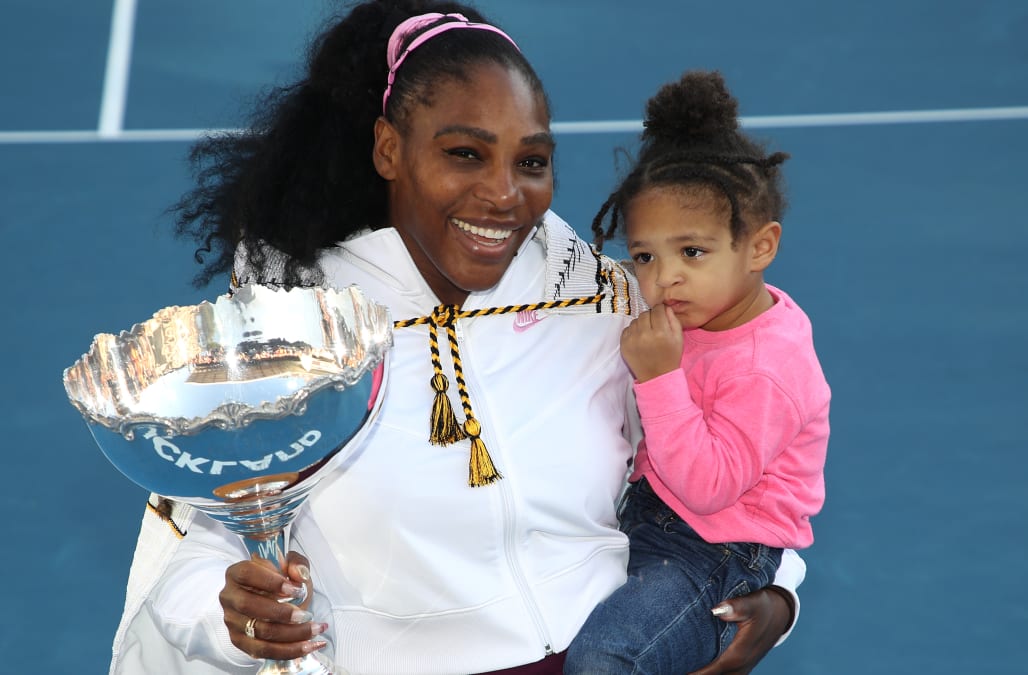 Serena Williams ended her title draught this weekend, winning the ASB Classic in Aukland, New Zealand, which is her first title in three years.

The 23-time grand slam champion defeated Jessica Pegula 6-3, 6-4 in Sunday's final. It was Williams' 73rd career title and her first since returning from maternity leave after giving birth to her daughter, Alexis Olympia Ohanian, Jr., who joined her on court as she posed for photographers after the win.

A first title in three years for @serenawilliams ! 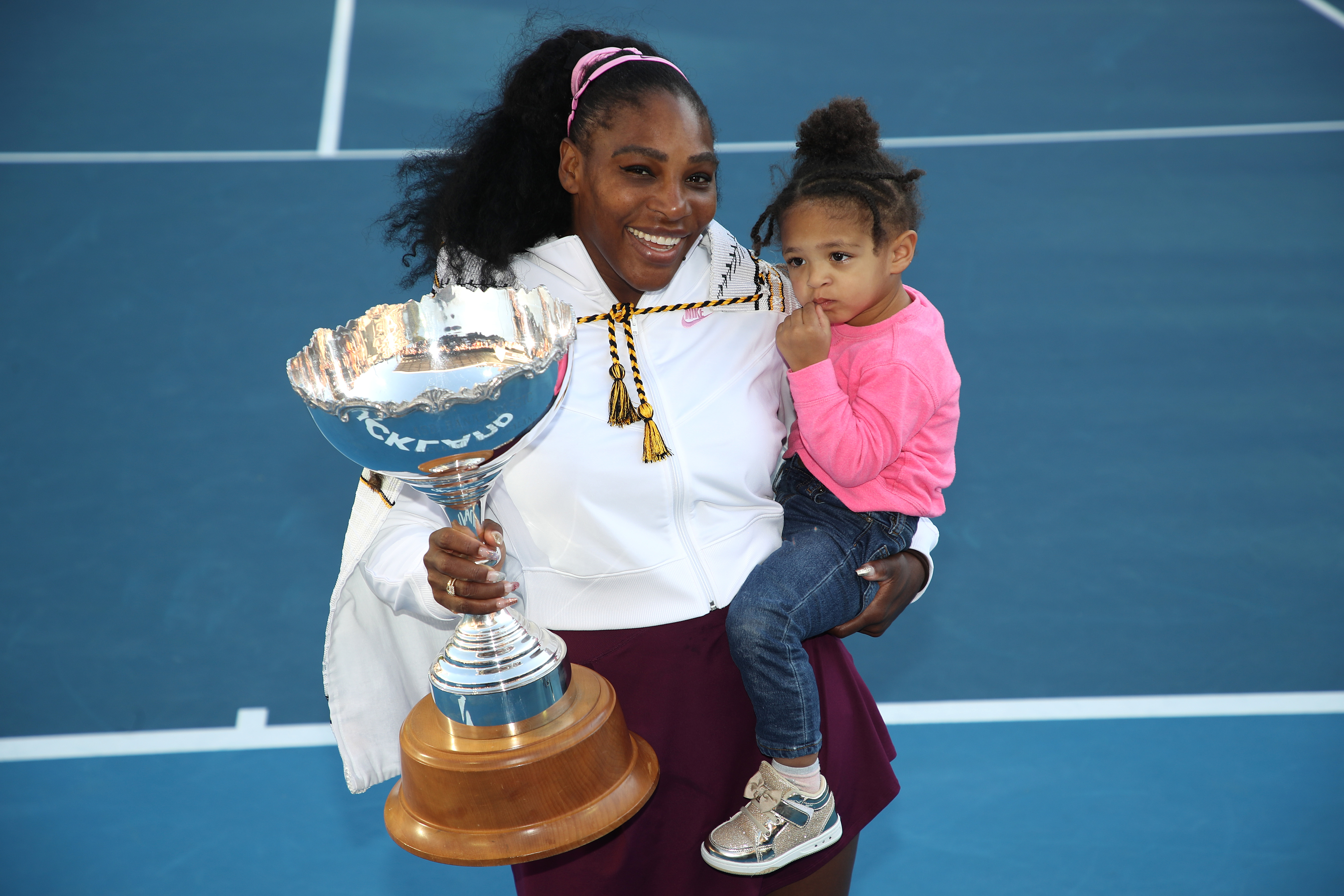 Before winning in Aukland, Williams' most recent tournament win came at the 2017 Australian Open in January 2017, when she defeated older sister Venus Williams to capture her 23rd grand slam title. She was pregnant with Olympia at the time.

While accepting her trophy following the match, the 38-year-old athlete announced that she would be donating all of her prize money from the ASB Classic to relief efforts for the Australian wildfires.

...then she announces she will donate her prize money (and a dress from each of her matches) to the bushfire relief effort! pic.twitter.com/xNVYAeLn3u

Williams also made it to the doubles final at Aukland before she and partner Caroline Wozniacki, who will retire after the Australian Open, lost to Americans Taylor Townsend and Asia Muhammad.

The tennis great's tournament win follows two years of well-documented struggles to seal the deal in finals: Since returning from maternity leave, Williams has lost in two straight Wimbledon and U.S. Open finals.

Her win in Aukland, however, should give her more confidence heading into the Australian Open later this month, where she'll be hoping to capture her elusive 24th major title.

"It's pretty satisfying just to get a win in the final," Williams said after the match. "That was really important for me — and I just want to build on it. It's just a step towards the next goal."

The tennis legend at Met Gala co-host took the Met Gala red carpet alongside husband Alexis Ohanian wearing a neon yellow Versace gown adorned with pink and yellow leaves. However, it was Williams' footwear of choice --  OFF-WHITE Air Force 1s in the color of tennis balls -- that truly made the look memorable.

All eyes were on Center Court as Serena Williams made her Wimbledon debut on July 2. In classic Serena fashion, her cut-out dress was untraditional, but it was the outfit's Nike "Swoosh" that really left Twitter reeling. The one-of-a-kind brooch was decked out in 34 gold Swarovski crystals, the number to represent Williams' age last time she won Wimbledon.

"Serena Williams' Nike swoosh (aka 'broosh') on her Wimbledon dress is made of 34 Swarovski crystals and that's the only reason I'm going to predict she wins it this year," wrote one Twitter user.

A foot injury isn't going to keep the tennis star away from the red carpet. Back in July 2010, Williams was forced to undergo foot surgery after cutting her foot on broken glass. She then turned her boot into a red carpet statement while making a Miami appearance.

“I decorated it myself with crystals. I am trying to make the best out of a bad situation. I hope to be out of the cast and back on the court by spring," she explained at the time.

Williams' 2002 US Open appearance may have predicted the athlete's love affair with bodysuits. Her Puma creation (pre-Nike partnership) garnered international attention and began her streak as a sartorial force. Not to mention the $29,000 Harry Winston diamond bracelet wore with her outfit.

“It makes me run faster and jump higher and it’s really sexy,” Serena said at the time.

August 2018: Catsuit at the French Open

The 23-time Grand Slam winner made headlines last summer when she famously kicked off the French Open in a Nike catsuit, which was reportedly engineered to prevent further blood clots following a traumatic birth experience with daughter Alexis. The French Tennis Federation responded to Williams' by banning catsuits, a move that has been deemed both racist and misogynistic against Williams.

The mother-of-one continued her streak of statement-making fashion at the Australian Open back in January in a Nike bodysuit and fishnet stockings, which became an instant with fans. Williams said after winning the match that her look was intended to inspire new moms.

“I came back. Nike always wants to make an incredibly strong, powerful statement for moms that are trying to get back and get fit. That was basically it for me," she explained.

Williams made a triumphant return to the US Open for her second match in another Virgil Abloh-designed creation, this time a one-shoulder lavender tutu which she paired with a pair of fishnets, a matching headband and sneakers.

Serena Williams and Alexis Ohanian showed up in Windsor in their Saturday best to help celebrate pal Meghan Markle's wedding to Prince Harry. With her blush Versace creation and matching fascinator, ranked high on the celeb-studded best-dressed list. Later that day, the star stepped into a stunning Valentino evening gown which she paired with sneakers.

For her first US Open tournament with Nike, the tennis star opted for a denim miniskirt and a black Nike crop top adorned with studs. Her look, she said, was influenced by Andre Agave and “watching him wearing jean shorts. "I always said, ‘One day, we’re going to have to bring back the jean short,’” she explained.

Williams was victorious in her first match at the US Open in 2014, and her outfit made the competition all the more memorable for spectators.