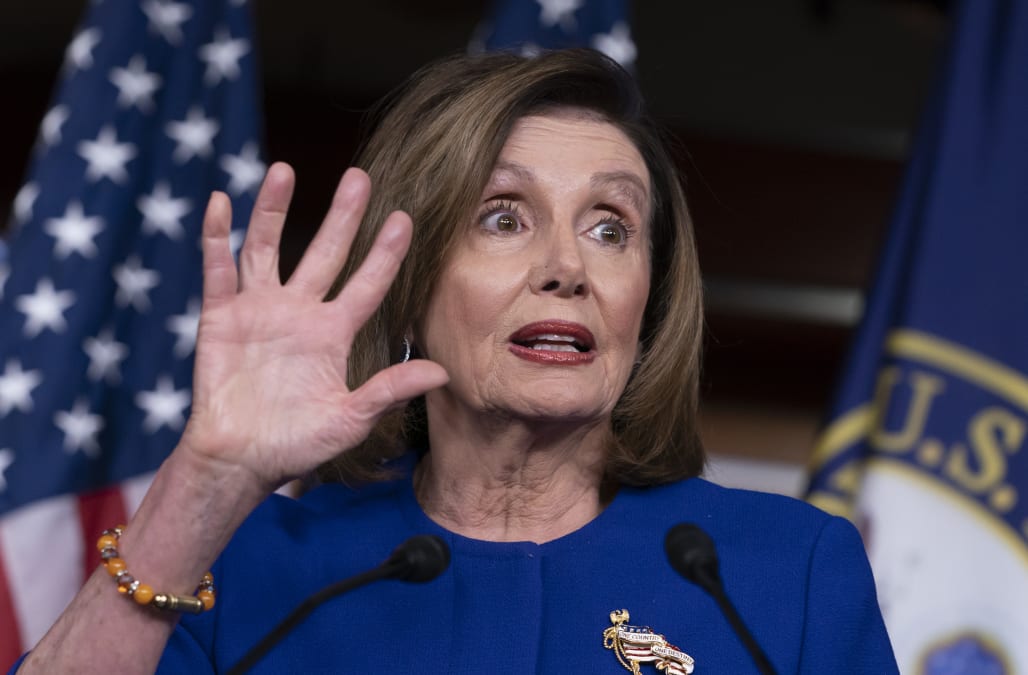 House Speaker Nancy Pelosi on Sunday continued her calls for witnesses in President Trump’s impeachment trial after conceding to send articles of impeachment to the Senate in the coming weeks without Majority Leader Mitch McConnell’s commitment to hear new testimony.

Pelosi, D-Calif., has withheld sending the articles of impeachment to the Senate after the House voted to impeach President Trump on Dec. 18, requesting assurances from McConnell that he would agree to have witnesses in the Senate trial.

McConnell has rejected Democrats’ requests for witness testimony and announced last week he has enough votes from his 53-member Republican majority to start a trial despite the weeks-long standoff over how the trial will be conducted and when the articles would be transmitted to the Senate.

The Republican leader has consistently said he wants to use the same rules that governed the 1999 Senate impeachment trial of Clinton, a Democrat who was impeached by the House for lying about a sexual affair with a White House intern and acquitted after a five-week trial.

In that trial, Democrats and Republicans were deeply divided over whether to allow witnesses and deferred until later in the process the question of calling additional witnesses. Despite his current stance, McConnell had advocated for a request by Republican House impeachment managers to have witnesses testify in the case against Clinton.

One of the main concerns around the question of witnesses in 1999 was that testimony from Monica Lewinsky, the former White House intern with whom Clinton engaged in an affair, would be below the dignity of the Senate. Ultimately the Senate decided to have Lewinsky and two other witnesses provide videotaped sworn testimony, and portions of that were shown as evidence in the trial. But no live witness testimony was provided.

“It isn’t the same thing,” Pelosi told George Stephanopoulos on ABC’s Sunday morning program “This Week,” adding that there were at least six reasons why the 1999 precedent could not be applied to Trump’s impeachment trial.

The main obstacle for Democrats has been obstruction by the White House, which has blocked a number of key witnesses from testifying about Trump’s attempts to pressure the Ukrainian government to undermine Joe Biden, a potential rival for the presidency in the 2020 election.

Pelosi said McConnell, who’s promised a quick acquittal, “will be accountable to the American people” for blocking witnesses in the Senate trial.

Bolton said last week he would testify if subpoenaed, but Trump signaled in an interview Friday with Fox News that he would block such a testimony, invoking executive privilege, if Bolton and others are issued subpoenas.

Stephanopoulos asked Pelosi if there were alternatives to circumventing Trump’s witness blockade, citing critics such as Sen. Susan Collins, R-Maine, who called out “gaps” in the House impeachment process and a failure to enforce subpoenas through court.

“That isn’t even true,” the speaker said. “We are in court on the witnesses. It could take a very long time.”

“Well, you pulled back the subpoena on John Bolton,” Stephanopoulos interjected.

“But on the other witnesses, we have been in court. And we haven’t eliminated the possibility of ever subpoenaing and going forward with Bolton,” Pelosi responded. “But the fact is is that the president of the United States — again, quite different from President Clinton, President Clinton allowed witnesses to come forward — President Trump has prevented that from happening.”

When Stephanopoulos asked why Democrats didn’t wait for the courts to rule, Pelosi said she was confident in their case.

“How long do the courts take? We have confidence in our case that this is impeachable, and the president is impeached for life, regardless of any gamesmanship on the part of Mitch McConnell,” she said. “We’re confident in the impeachment, and we think that’s enough testimony to remove him from office.”

Pelosi said Democrats would decide in a closed-door caucus meeting on Tuesday morning when to hold the vote on the resolution to name impeachment managers, who would then deliver the articles of impeachment to the Senate.

Senate rules dictate that a trial must start as soon as the House sends over articles of impeachment. When asked if she had any second thoughts about holding on to them for three weeks, Pelosi said, “No, no, no.”

“We feel that it’s a positive result in terms of additional emails and unredacted information that has come forward, that Bolton has said that he would testify if subpoenaed by the Senate, other information that has come forward,” she said. “And more importantly, raising the profile of the fact that we need to have witnesses and documentation, and if we don’t, that is a cover-up.”