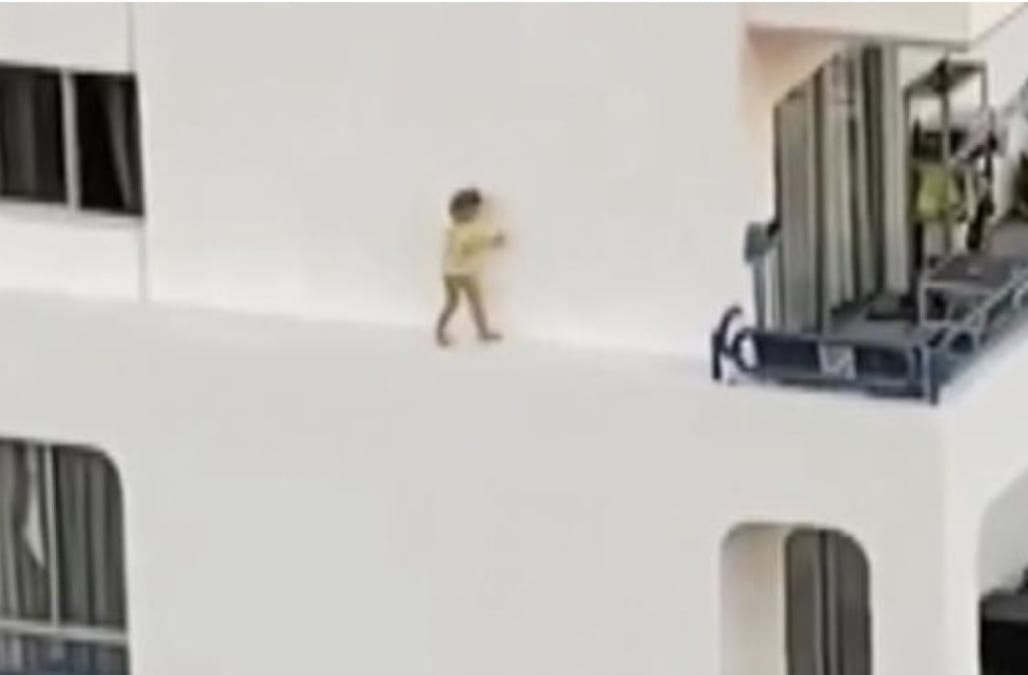 Heart-stopping footage captured off the coast of Spain shows a toddler precariously walking along the ledge of an apartment building while the child's parents allegedly took a shower.

The now-viral video was captured in Playa Paraiso, located on Tenerife — the largest of Spain's Canary Islands, — and later shared on the Facebook page "I Love Tenerife!" which has more than 54,000 followers.

In the clip — which was allegedly shot by the daughter of a male tourist, who was staying at a nearby apartment as her father ran over to alert security — the unidentified toddler can be seen exiting an open 4th-floor window and walking along a narrow ledge on one of the building's faces before reaching a balcony at the corner.

The child then peers over the balcony railing before walking back across the ledge and returning to the open window. Although the clip cuts out before the child makes it back inside, they reportedly reentered unharmed.

Footage of the incident has racked up more than 4.3 million views on Facebook, as well as a slew of comments bashing the toddler's parents, who were allegedly showering as their offspring's life was in danger.

"If you were on holiday with little ones in an apartment, would you not surely leave one parent watching whilst the other had a shower???" one user commented.

"I'm watching it with my heart in my mouth and stomach in knots, praying and trying to work out of its a hoax or fake but I don't think it is," wrote another. "Thank god [the] child is OK."

Some parents, however, rushed to defend the child's guardians, arguing the incident could have happened to anyone.

"I'm sure the parent/parents thought the window/door was closed," wrote one woman. "Whilst this could of [sic] been very tragic, let's not judge unless we know the whole story and just be glad the [child] is ok."

"Some of [the] comments on here make me sick, how many times have you turned ya back on the kids for 2 seconds cause that's all it takes," one man said. "Just glad the little bugger didn't fall."

Still, others weren't humoring the argument.

"I'm a single parent and my child has never managed to open a window, climb out of it and do a bastard river dance on a ledge!" replied one woman. "I shower when she's asleep, or when someone is there to watch her. Two parents?! No excuse for leaving the child alone!"