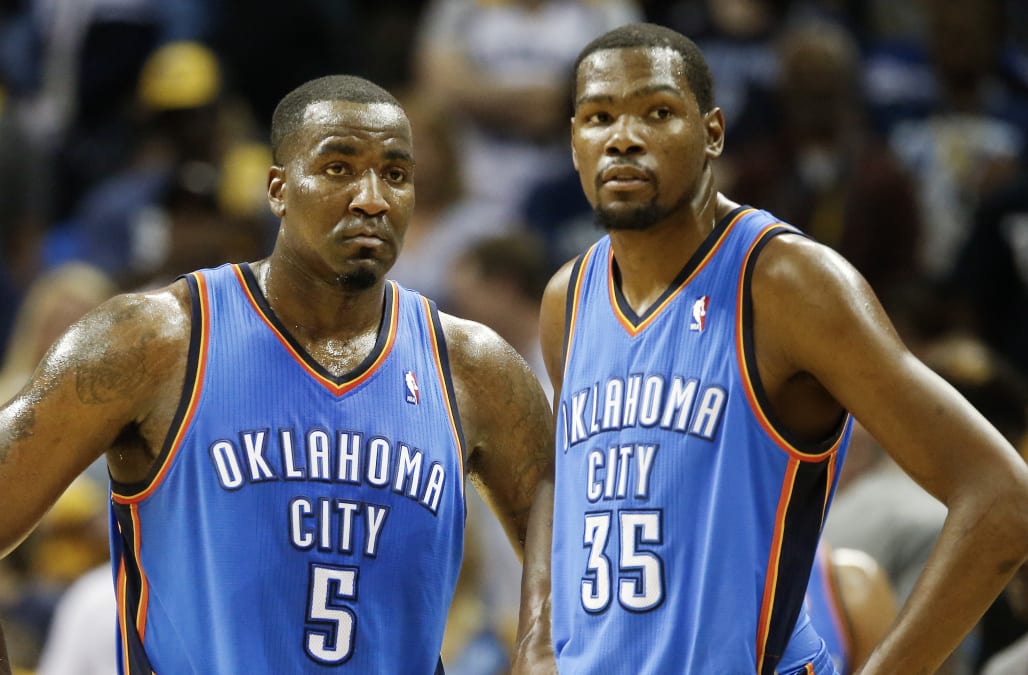 There's little doubt that Kevin Durant is one of this generation's most talented stars.

But where he stacks up as a competitor? Well, that's a bit of a different debate.

Durant's former Oklahoma City Thunder teammate, Kendrick Perkins, critiqued the 10-time NBA All-Star's legacy on Twitter Thursday night after referring to Russell Westbrook as "the best player to have ever put on a Oklahoma City Thunder Jersey." And Durant — who is known both for his blunt commentary on social media and for his history of using burner accounts — refused to let Perkins sully his name without a fight.

Check out what went down below:

The feud started innocently enough. Perkins tweeted to tease an upcoming appearance on SportsCenter in which he claimed that Russell Westbrook was the greatest player in Thunder franchise history.

In about 30 minutes I’m going to give my opinion on @SportsCenter on why Believe that Russell Westbrook is the best player to have ever put on a Oklahoma City Thunder Jersey!!! He is MR. THUNDER!!!

Boston Celtics writer Mark D'Amico chimed in to argue that Westbrook may have had the best career in Oklahoma City but certainly wasn't the Thunder's best player ever.

He put together the best career within that organization, but he’s definitely not the best player to have ever put on a jersey for them. Cmon Perk!

And when D'Amico invoked Westbrook's postseason success — or lack thereof — in Oklahoma City, Perkins responded with a critique of Durant's playoff history there.

KD lost in the second round without Russ when I was there. So what that mean?

That's when Durant chimed in.

Yea and our starting center @KendrickPerkins averaged a whopping 2 and 3 during that series. U played hard tho champ lol

First, Perkins owned up to his subpar performance during the playoff series in question, when the Thunder survived the Houston Rockets before falling to the Memphis Grizzlies without Westbrook in 2013. He also noted that he, too, won an NBA championship in his career.

But then Perkins criticized Durant's decision to leave Oklahoma City for the reigning champion Golden State Warriors in 2016, mere months after Durant, Westbrook, and company lost a seven-game series to the Warriors in the Western Conference finals.

Boy stop you did the weakest move in NBA History!!! Up on a team 3-1 in the western conference finals and then go join them the following season?! Heart of Champion right there

Apparently Durant had heard that critique before.

He then once again took aim at Perkins' poor production with the Thunder. The retired big man responded with the common talking point that Durant's championships are less meaningful because he joined a team that was historically great before his arrival.

That’s fine!!! You worked that hard and still had to go join a 73-9 team. Truth be told you don’t even feel like a real Champ, you have hard time sleeping at night huh knowing that you took the coward way out!!!

One fan brought the conversation full-circle by questioning whether Durant was angry about not getting a tribute video from his former franchise. Westbrook received a warm welcome and a tribute video in his first return to Oklahoma City Thursday night after his trade to Houston during the offseason.

Haha Nah perk just been shooting his lil shots at me for a minute.

This wasn't the first time Durant's tweets received attention this week. When a fan implied that his new team — Brooklyn Nets — are irrelevant, Durant clapped back with a pithy response.

What does it say?

Durant is out for the season after rupturing his Achilles tendon during Game 5 of last year's NBA Finals. Rest assured, the 2014 NBA MVP and four-time NBA scoring champion will continue talking smack on Twitter until he makes his Nets debut next season.

Why do u care? Just scroll on down the line

Now check out Jimmy Butler's feud with T.J. Warren from earlier this week.