IOC makes it clear: Athlete protests not allowed at 2020 Olympics 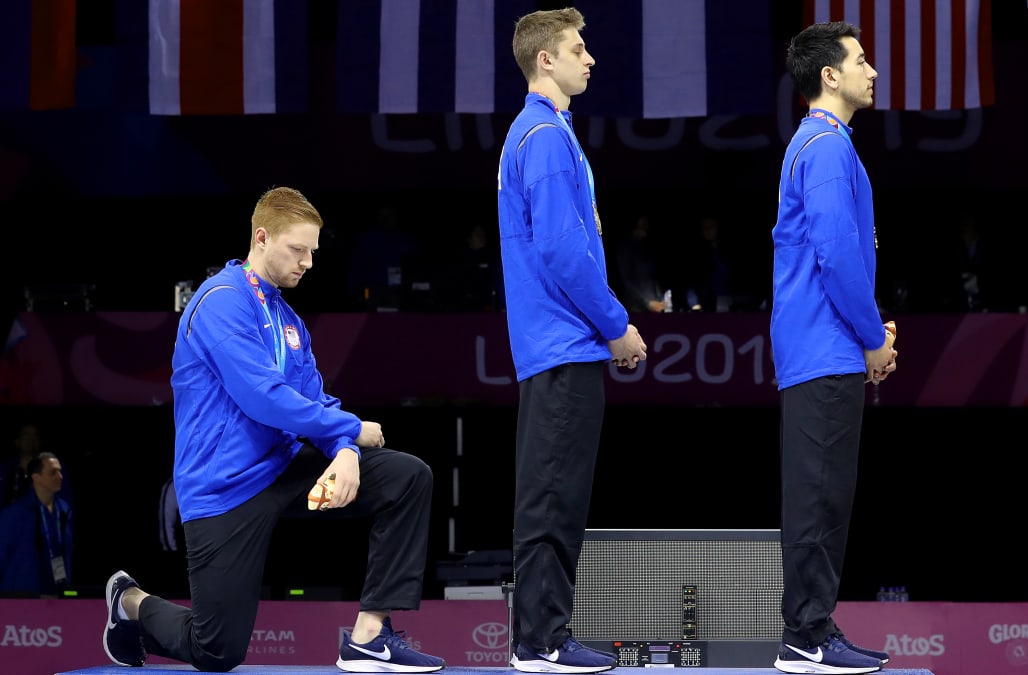 Before Thursday, the International Olympic Committee’s stance on protest at the Olympics Games was confined to one sentence in the Olympic Charter. It reeked of ambiguity and invited confusion. What, exactly, qualifies as a protest?

On Thursday, in an effort to keep politics far away from Tokyo 2020, the IOC answered that question with more specificity than ever before.

There will be no kneeling during national anthems.

No raising of fists, à la John Carlos and Tommie Smith at the 1968 Games.

No politically charged signs or armbands.

At least not at any Olympic venue. Not in stadiums or at pools or at a course’s finish line. Not on podiums during medal ceremonies. Not during the opening and closing ceremonies. Not even in the Olympic Village.

And if there is? Discipline of some sort will follow.

The IOC laid out its policy in a three-page document published Thursday, six-and-a-half months before the 2020 Summer Games are set to begin. In what it deemed a “non-exhaustive list” of examples, it specifically mentioned the following as “constitut[ing] a protest, as opposed to expressing views”:

The IOC did not specify what the punishment would be for athletes who violate the policy. Instead, it left itself disciplinary leeway. “Each incident will be evaluated by their respective National Olympic Committee, International Federation and the IOC, and disciplinary action will be taken on a case-by-case basis as necessary,” the document reads.

The document published Thursday clarifies the notorious Rule 50 of the Olympic Charter. “No kind of demonstration or political, religious or racial propaganda is permitted in any Olympic sites, venues or other areas,” the Charter reads.

This past summer and fall, after three-plus years of protests of all kinds across many sports, Olympic officials realized they needed to address the rule’s ambiguity.

The USOC, in response, wrote a letter – which was obtained by Yahoo Sports – to the two athletes. USOC CEO Sarah Hirshland formally reprimanded them, and placed them on 12-month probation, but acknowledged that the rules governing protest needed clarification.

"We recognize that we must more clearly define for Team USA athletes what a breach of these rules will mean in the future,” Hirshland wrote. "We are committed to more explicitly defining what the consequences will be for members of Team USA who protest at future Games. ... We also expect to work closely with the International Olympic Committee and International Paralympic Committee to engage in a global discussion on these matters.”

Discussions along those lines have happened, and will continue to happen going forward. (The USOC has not yet commented on the IOC’s newly-released guidelines.)

The 2020 Olympics, of course, will not be an entirely politics-free zone. The IOC did clarify that “press conferences and interviews,” and “digital or traditional media,” are acceptable arenas for free expression. Some athletes, however, feel that restricting free expression is unacceptable.

The IOC’s long-standing argument is that the Olympics should be “politically neutral.” That’s how IOC president Thomas Bach put it in a Jan. 1 open letter.

“The Olympic Games are always a global platform for the athletes and their sporting performances,” Bach wrote. “They are not, and must never be, a platform to advance political or any other potentially divisive ends. We stand firmly against the growing politicization of sport because only in this way can we accomplish our mission to unite the world in peaceful competition. As history has shown, such politicization of sport leads to no result and in the end just deepens existing divisions.”

The counterargument is the one Global Athlete, an international “progressive athlete start-up movement,” made in response to Bach. “Let’s be clear, the Olympic Movement has already politicized sport,” the group said in a statement.

It continued: “To mention a few instances; in PyeongChang the IOC promoted a unified South and North Korean team; the IOC has an observer seat around the United Nations Assembly; the IOC President regularly meets with Heads of States; the Olympic Movement notion of sport autonomy is overshowed by Heads of States also fulfilling roles as heads of National Olympic Committees and heads of IOC Commissions hold Ministerial positions.

“This ship has sailed; the IOC has already politicized sport.”

This contentious conversation will continue into and throughout the 2020 Olympics in Tokyo. “It is a fundamental principle that sport is neutral and must be separate from political, religious or any other type of interference,” the document released by the IOC on Thursday reads. That will never be entirely true. But the IOC is determined to protect Olympic competitions themselves from anything that might deter or anger viewers.