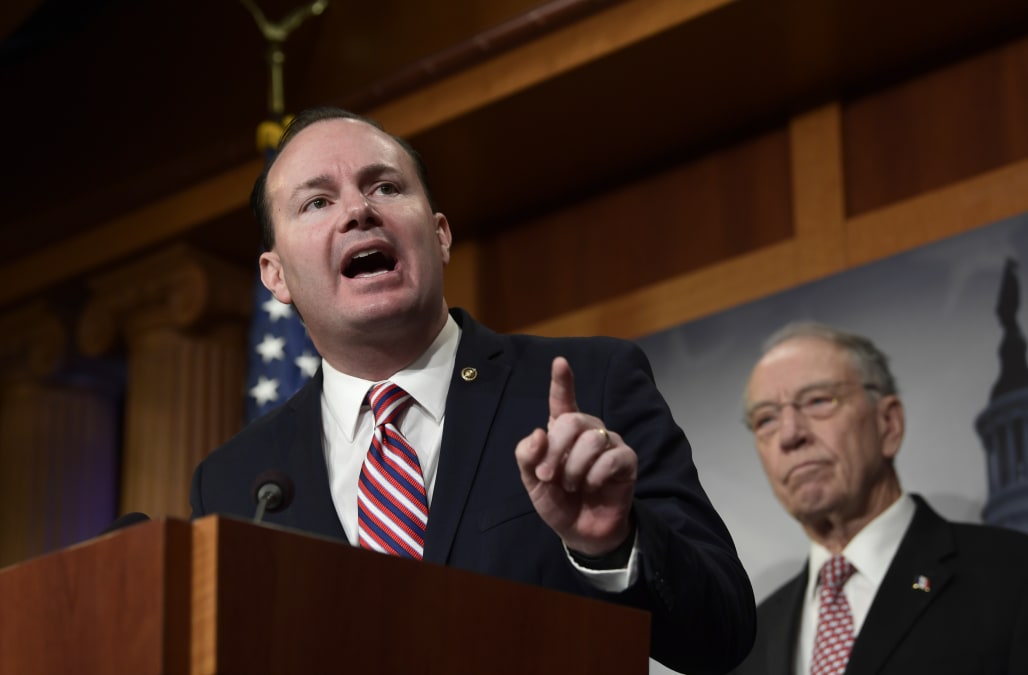 WASHINGTON — A briefing by Trump administration officials about the U.S. military strike that killed Iran’s most famous general backfired on Wednesday, angering two Republican senators and driving them to support a Democratic effort to require congressional approval for any further military engagement.

“I walked into that briefing undecided,” Lee said in the basement of the Capitol, near the high-security briefing room used to discuss classified information. “I walked out decided.”

“That briefing is what brought me onboard,” Lee said. He described the Trump administration officials — including Secretary of State Mike Pompeo and Secretary of Defense Mark Esper — as treating the assembled lawmakers like “little boys and girls” by asking them not to support the Kaine proposal, which would require a debate over the president’s order on Jan. 3 to kill Iranian general Qassem Soleimani.

“To come in and tell us that we can’t debate and discuss the appropriateness of military intervention against Iran, it’s un-American,” Lee said. “It’s wrong. … That was insulting.”

Citing the classified nature of the briefing, Lee declined to name which Trump officials in particular said what. But he said he wanted to tell the president about how unsatisfactory the meeting was. “This administration was ill-served by this briefing today,” Lee said.

He called it “probably the worst briefing I’ve seen, at least on a military issue, in the nine years I've served in the United States Senate.”

Sen. Rand Paul, R-Ky., a long-time advocate of greater congressional control over presidential powers in the area of foreign policy, stood next to Lee and said that he too supports the Kaine proposal.

Only 51 votes are needed to pass the Kaine war powers resolution, because under Senate rules such a proposal falls into the category of what is known as a “privileged resolution.” Most Republican senators besides Lee and Paul have traditionally opposed efforts to restrict presidential war powers in the past, but the defection of these two lawmakers on this matter gives Senate Majority Leader Mitch McConnell, R-Ky., little margin to lose other Republican votes. Most if not all Democratic senators are expected to support it.

Meanwhile, in the House, Speaker Nancy Pelosi, D-Calif., announced Wednesday afternoon that the House will hold a vote Thursday on its own war powers resolution.

“Members of Congress have serious, urgent concerns about the Administration’s decision to engage in hostilities against Iran and about its lack of strategy moving forward,” Pelosi said in a statement. “Our concerns were not addressed by the President’s insufficient War Powers Act notification and by the Administration’s briefing today.”

The House resolution would be designed, Pelosi said, “to limit the President’s military actions regarding Iran.”

The House resolution will almost certainly pass, given the Democrats’ significant majority in the lower chamber.

Trump’s comments in a morning address to the nation lowered tensions with Iran after the Iranian government attacked U.S. military bases in Iraq on Tuesday afternoon with more than a dozen ballistic missiles. But Trump’s speech did not reduce the resolve of those in Congress who want to reassert the role of the legislative branch in foreign conflicts.

Article 1, Section 8 of the Constitution gives Congress the power to declare war, and Kaine in particular — along with Republicans like Paul and Lee — has long been frustrated by the unwillingness of President Obama, a Democrat, and now by Trump, a Republican, to seek congressional approval before initiating military conflict.

After an earlier House briefing by Trump officials, many Democrats said that the State and Defense officials had provided no evidence of an imminent threat to American personnel or interests that would have justified the killing of Soleimani without seeking congressional approval.

More from Yahoo News:
On Iran, Trump dodges a bullet for now
Pompeo defends strike on Iranian general but resists giving intel on 'imminent' attack
Was attack by Soleimani 'imminent' before U.S. killed him? Pompeo dodges the question.