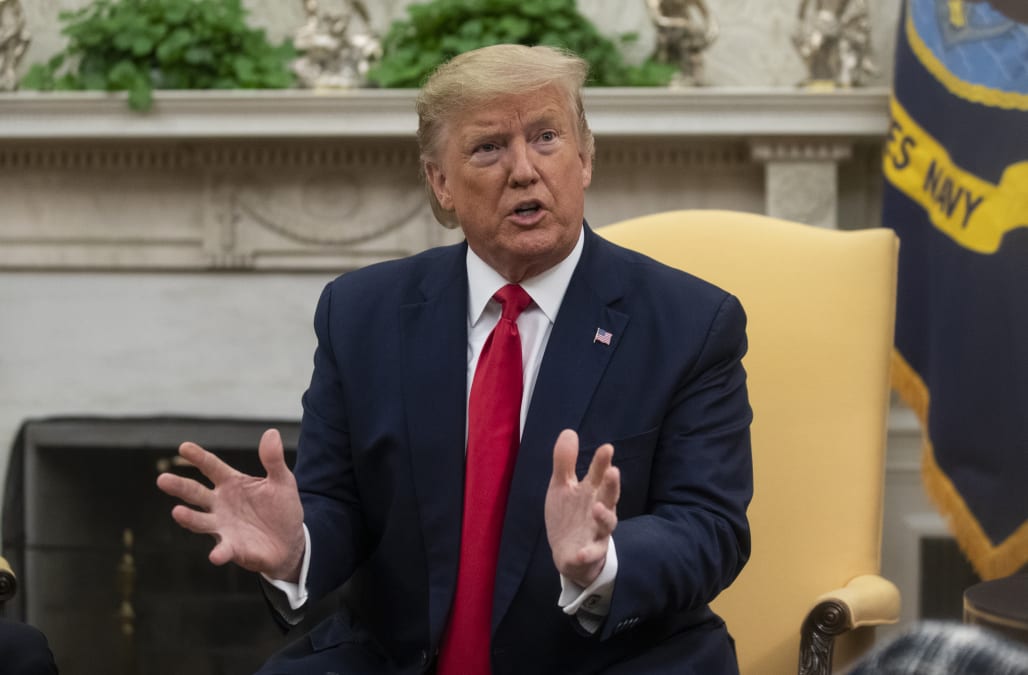 President Donald Trump reluctantly walked back his threats to commit a war crime by launching airstrikes against Iranian cultural sites, telling reporters on Tuesday that he was “OK with” obeying international law on the matter while also expressing his petulance.

Trump vowed over the weekend to target 52 locations, including some“important to Iran & the Iranian culture,”if Tehran retaliated against the U.S. for assassinating Iranian General Qassem Soleimani. Trump then defended his stance on Sunday, effectively doubling down on his threat to commit war crimes.

Although Trump appears to have backed off somewhat following the backlash, his remarks were in keeping with a history of flagrant disregard for human rights and international law ― often describing them as a hindrance to his own authority.

During the 2016 presidential election campaign he criticized the Geneva Conventions as a “problem” in the fight against ISIS and complained that the U.S. wasn’t allowed to use torture. He also repeatedly spread a debunked myth about a World War I-era U.S. general in the Philippines killing Muslim prisoners with bullets dipped in pigs’ blood, which would also constitute a war crime.

Trump continued his disregard for international law and human rights as president, recently pardoning Navy SEAL Eddie Gallagher after he was accused of war crimes and convicted of posing for photos with the corpse of a dead ISIS detainee. (Gallagher was acquitted of other charges that included shooting unarmed civilians.) Trump has praised some of the world’s worst rights abusers, while his administration broadly deemphasized and undermined human rights as an international issue.

What Trump threatened against Iran is a clear-cut example of a war crime and in violation of international treaties that the U.S. has signed on to, according to Sara Bronin, a professor at the University of Connecticut School of Law. The United States is party to the Hague Convention of 1907, which dictates that “all necessary steps must be taken” to protect sites of cultural, scientific, historic and religious importance.

The Obama administration in 2009 also ratified the Hague Cultural Property Convention of 1954 which similarly prohibits attacks and which destroying Iran’s cultural sites would violate. Article 53 of the Geneva Convention additionally forbids destruction of historic monuments and places of worship, expressly prohibiting making them the subject of reprisal attacks, while the U.S. Defense Department Law of War Manual bars targeting cultural property. The United Nations Security Council unanimously adopted a resolution in 2017 vowing to protect the world’s cultural heritage from conflict.

The U.S. interest in preserving cultural sites and important historical artifacts during war goes back to at least the Civil War era, when the Lincoln administration produced the Lieber Code ordering that “classical works of art, libraries, scientific collections, or precious instruments” should be protected from harm.

U.S. rhetoric on protecting cultural heritage hasn’t always matched its actions, which have included bombing Vietcong-occupied historic temples during the Vietnam War and in recent years supporting Saudi Arabia’s devastation of Yemen’s ancient heritage sites. But experts say that Trump’s threats were unique in their explicit contempt for international norms around cultural property, as well as nonsensical from a policy standpoint.

Trump’s threats to attack cultural sites are “not useful strategically, even if what you’re trying to do is put American foreign policy interests above all else,” said Christine Cheng, associate professor in the department of war studies at King’s College London. “There’s nothing that would rally people more than this.”

Destroying Iranian cultural sites would also be similar to abuses that the U.S. has fiercely condemned in past administrations. The Taliban’s destruction of Afghanistan’s Bamiyan Buddhas in 2001 was widely condemned as an atrocity, and the U.S. state department founded special programs to address the Islamic State militant group’s targeting of Syrian and Iraqi cultural and religious sites. It would also weaken international courts’ attempts to establish stronger norms around forbidding the destruction of cultural sites, which has increased in recent years with the International Criminal Court’s prosecution and conviction of an Al Qaeda-linked militant who organized the destruction of Muslim shrines in Mali.

Iran has 22 cultural sites which the United Nations cultural body, UNESCO, has labeled as protected on their world heritage list ― some of which have stood for thousands of years and represent world-renowned examples of art, architecture and engineering.

“A lot of these things are irreplaceable, not just irreplaceable in the physical sense but in terms of a sense of loss of dignity, in the sense of belonging and community,” Cheng said.

“You can’t really fix that, and all that really does is cause long-term hatred and resentment. It’s the opposite of what the U.S. would want in terms of eventually trying to normalize U.S.-Iran relations,” she said.