Seahawks do just enough to win, knocking Carson Wentz-less Eagles out of playoffs 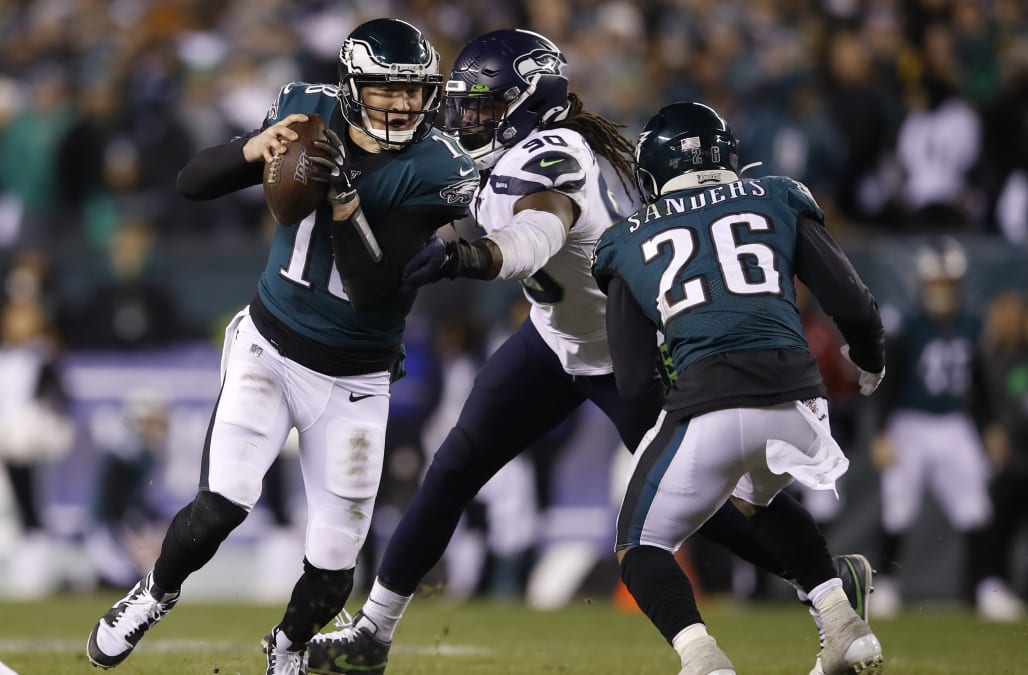 Once the Philadelphia Eagles lost their quarterback, the Seattle Seahawks didn’t have to do much to win.

They took that to heart, struggling to put away a severely shorthanded Eagles team. But thanks to a couple big plays by Russell Wilson, plus touchdowns to rookie D.K. Metcalf and 33-year-old running back Marshawn Lynch, the Seahawks advanced with a 17-9 win.

It wasn’t pretty, particularly a questionable hit that knocked out Eagles quarterback Carson Wentz, but the Seahawks did enough. They move on to play the Green Bay Packers next Sunday evening.

The Seahawks have won plenty of playoff games with Pete Carroll, some more photogenic than others. But they all count, and Seattle is happy to still be alive in the postseason.

The scope of the game changed early on. Wentz was going down on a run and Jadeveon Clowney hit him in the back of the helmet. At best it was unnecessary, at worst it was dirty. Wentz went in the medical tent and then back to the locker room, eventually ruled out with a concussion.

In came Josh McCown, who Philadelphia dragged out of retirement at 40 years old and had never thrown an NFL postseason pass. With the other injury issues on the Eagles’ offense, they really didn’t have a chance.

The Eagles had a couple scoring opportunities in the fourth quarter. Given the lack of opportunities before then, Eagles coach Doug Pederson first decided to go for it on fourth-and-4, and a pass to Miles Sanders fell incomplete. Later, inside of the two-minute warning, the Eagles went for it again on fourth-and-7. McCown was sacked by Clowney without getting a pass off.

The Seahawks seemed well aware that it wasn’t going to take a lot of offense to eliminate the Eagles, and they played accordingly.

Seahawks squeeze out a win

Wilson had 325 passing yards and came up big in crucial moments. He always seems to come up with a play right when the Seahawks need it.

A short pass to receiver David Moore in the second quarter turned into a 38-yard gain to the Eagles’ 5-yard line. Lynch plowed into the end zone on a vintage goal-line run.

The biggest play of the game came in the third quarter. Wilson threw deep to physically imposing rookie Metcalf, who caught it and managed his way into the end zone for a 17-9 Seahawks lead. Metcalf also put the game away, with Wilson throwing deep on third down in the final two minutes and hitting Metcalf on a long pass to finish the game. Metcalf had 160 receiving yards, the most for any rookie making his NFL playoff debut.

The defense’s challenge was a lot easier with McCown playing quarterback instead of Wentz, but they did make enough plays to win, too. Clowney, who was acquired in a trade with the Houston Texans just before the season started, was a force. The Seahawks had seven sacks, their high mark of the season, and kept the Eagles out of the end zone.

Presumably, Seattle will have to play better to beat Green Bay next week and advance. It’s a good problem to have.

More from Yahoo Sports:
Should hit to Carson Wentz's head have been flagged?
Jason Garrett finally told he won't return as Cowboys coach
Cousins comes up big to lift Vikings over Saints in OT