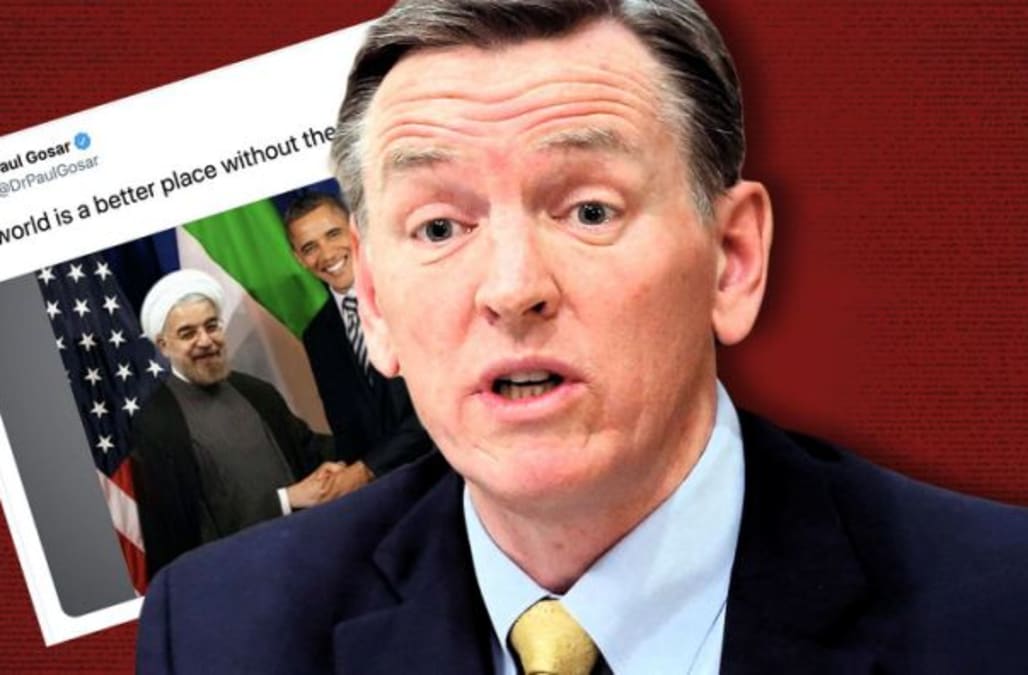 A Republican congressman who tweeted a picture of former President Barack Obama shaking hands with Iranian President Hassan Rouhani Monday defended it as making a valid point after commenters pointed out that the two never met in person.

In his original post, Gosar proclaimed that “the world is a better place without these guys in power.” Rouhani is still Iran’s president.

The world is a better place without these guys in power. pic.twitter.com/gDoXQu9vO5

Gosar, a former dentist who now represents Arizona’s rural Fourth District, defended posting the doctored image, writing, “no one said this wasn’t photoshopped.” But his original post did not indicate that it was faked.

1. To the dim witted reporters like @dmedin11: no one said this wasn’t photoshopped. No one said the president of Iran was dead. No one said Obama met with Rouhani in person.
The tweet says: “the world is a better place without either of them in power”. https://t.co/zwLPPXniQh

Gosar accused Obama of having “coddled, appeased, nurtured and protected the worlds [sic] No. 1 sponsor of terror.”

2. The point remains to all but the dimmest: Obama coddled, appeased, nurtured and protected the worlds No. 1 sponsor of terror. The world is better without Obama as president. The world will be better off without Rouhani.

That has been a Republican talking point ever since the Obama administration — together with United Kingdom, Russia, France and Germany — signed a pact with Iran that lifted economic sanctions in return for a pledge that Iran halt sensitive nuclear development and allow international inspections.

“If the goal is to avoid a war, it would be wise to reject this fundamentally flawed agreement that all but guarantees a nuclear Iran,” Gosar wrote in an op-ed for the Prescott Daily Courier.

Gosar became briefly notorious in 2018 when his own family made an ad urging people to vote for his opponent.

In 2018, Trump pulled the U.S. out of the nuclear deal with Iran, though Tehran indicated it would abide by the terms as long as the other world powers honored it. Following the American drone strike last week that killed Iranian Gen. Qassem Soleimani, however, Iran reversed that decision, saying it would no longer abide by the agreement.