By Ahmed Aboulenein and Maha El Dahan and David Shepardson 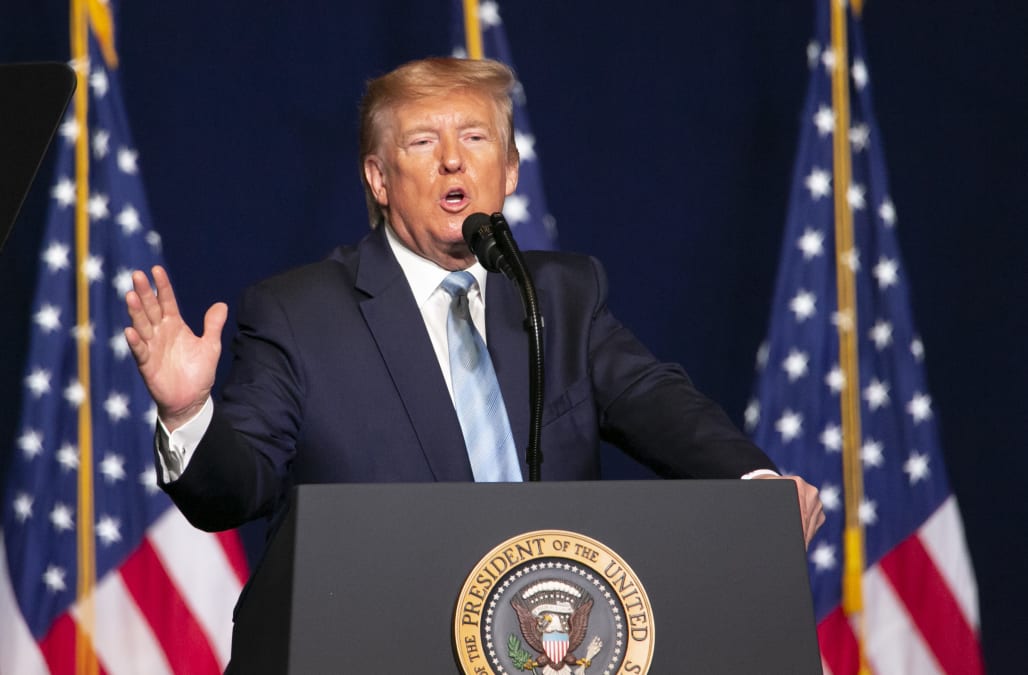 BAGHDAD/WASHINGTON -- President Donald Trump on Saturday threatened to hit 52 Iranian sites "very hard" if Iran attacks Americans or U.S. assets after a drone strike that killed Iranian military commander Qassem Soleimani and an Iraqi militia leader, while tens of thousands of people marched in Iraq to mourn their deaths.

Showing no signs of seeking to ease tensions raised by the strike he ordered that killed Soleimani and Iranian-backed Iraqi militia leader Abu Mahdi al-Muhandis at Baghdad airport, Trump issued a stern threat to Iran on Twitter. The U.S. strike has raised the specter of wider conflict in the Middle East.

Iran, Trump wrote, "is talking very boldly about targeting certain USA assets" in response to Soleimani's death. Trump said the United States has "targeted 52 Iranian sites" and that some were "at a very high level & important to Iran & the Iranian culture, and those targets, and Iran itself, WILL BE HIT VERY FAST AND VERY HARD."

"The USA wants no more threats!" Trump said, adding that the 52 targets represented the 52 Americans who were held hostage in Iran for 444 days after being seized at the U.S. embassy in Tehran in November 1979.

Trump did not identify the sites. The Pentagon referred questions about the matter to the White House, which did not immediately respond to a request for comment.

Among the mourners in Iraq included many militiamen in uniform for whom Muhandis and Soleimani were heroes. They carried portraits of both men and plastered them on walls and armored personnel carriers in the procession. Chants of "Death to America" and "No No Israel" rang out.

On Saturday evening, a rocket fell inside Baghdad's heavily fortified Green Zone near the U.S. Embassy, another hit the nearby Jadriya neighborhood and two more rockets were fired at the Balad air base north of the city, but no one was killed, the Iraqi military said in a statement. There was no immediate claim of responsibility.

Gholamali Abuhamzeh, a senior commander of the Revolutionary Guards, said Tehran would punish Americans "wherever they are in reach," and raised the prospect of possible attacks on ships in the Gulf.

Iraq's Kataib Hezbollah militia warned Iraqi security forces to stay away from U.S. bases in Iraq, "by a distance not less than a thousand meters starting Sunday evening," reported Lebanese al-Mayadeen TV, which is close to Lebanon's Hezbollah.

Trump said on Friday that Soleimani had been plotting "imminent and sinister" attacks on American diplomats and military personnel. Democratic critics said the Republican president's action was reckless and risked more bloodshed in a dangerous region.

"The safety of our personnel in Iraq is paramount. We continue to take all precautions necessary," acting NATO spokesman Dylan White said in a statement.

Soleimani was the commander of the Revolutionary Guards' foreign legions. The attack took Washington and its allies, mainly Saudi Arabia and Israel, into uncharted territory in their confrontation with Iran and its proxy militias across the region.

The United States has been an ally of the Iraqi government since the 2003 U.S. invasion to oust dictator Saddam Hussein, but Iraq has become more closely allied with Iran.

The Iraqi parliament is convening an extraordinary session during which a vote to expel U.S. troops could be taken as soon as Sunday. Many Iraqis, including opponents of Soleimani, have expressed anger at Washington for killing the two men on Iraqi soil and possibly dragging their country into another conflict.

Soleimani, 62, was Iran's pre-eminent military leader - head of the Revolutionary Guards' overseas Quds Force and the architect of Iran's spreading influence in the Middle East.

A PMF-organized procession carried the bodies of Soleimani and Muhandis, and those of others killed in the U.S. strike, through Baghdad's Green Zone.

Mourners brought the bodies of the two slain men by car to the Shi'ite holy city of Kerbala, south of Baghdad, then to Najaf, another sacred Shi'ite city, where they were met by the son of Iraq's top Shi'ite cleric, Grand Ayatollah Ali al-Sistani, and where Muhandis and the other Iraqis killed will be laid to rest.

Soleimani's body will be transferred to the southwestern Iranian province of Khuzestan that borders Iraq. On Sunday it will be taken to the Shi'ite holy city of Mashhad in Iran's northeast and from there to Tehran and his hometown Kerman in the southeast for burial on Tuesday, state media said.

The U.S. strike followed a sharp increase in U.S.-Iranian hostilities in Iraq since last week when pro-Iranian militias attacked the U.S. embassy in Baghdad after a deadly U.S. air raid on Kataib Hezbollah, founded by Muhandis. Washington accused the group of an attack on an Iraqi military base that killed an American contractor.

Abuhamzeh, the Revolutionary Guards commander in Kerman province, mentioned a series of possible targets for reprisals including the Gulf waterway through which about a third of the world's shipborne oil is exported to global markets.

"The Strait of Hormuz is a vital point for the West and a large number of American destroyers and warships cross there," Abuhamzeh was quoted as saying on Friday evening by the semi-official news agency Tasnim.

(Reporting by Ahmed Aboulenein and Maha El Dahan in Baghdad and David Shepardson in Washington; Additional reporting by Ghazwan Jabouri in Tikrit, Parisa Hafezi in Dubai, Nadine Awadallah in Beirut, John Chalmers in Brussels, and Kate Holton in London; Writing by Will Dunham, Mark Heinrich and Grant McCool; Editing by Frances Kerry and Daniel Wallis)

More from Aol.com:
Trump tells evangelicals that God is 'on our side'
Trump says U.S. killed Soleimani 'to stop a war'
National security official says Americans are 'walking prime targets' for Iran