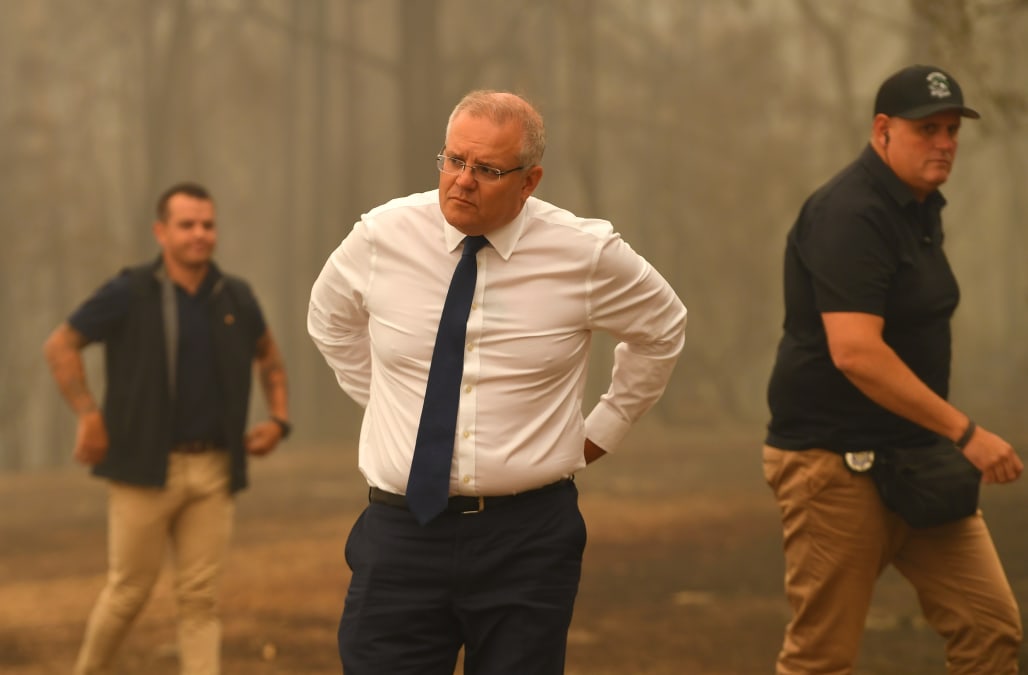 Australian Prime Minister Scott Morrison was confronted Thursday by angry residents of the town of Cobargo as bush fires made worse by climate change continued to ravage the country.

Morrison, a climate change skeptic, has been sharply criticized for what has been seen as an insufficient response to the wildfires.

“Nah, you’re an idiot, mate,” another man told Morrison. “You really are.”

At least 19 people have died and more than 1,300 homes have been destroyed in more than 100 wildfires that now ring the continent. Two states, Victoria and New South Wales, have been declared disaster areas. Authorities continue to evacuate residents as firefighters seek to get the conflagrations under control. An estimated 500 million animals have been killed in the blazes, which are believed to have spewed two-thirds of the country’s annual carbon emissions over the past three months. On Friday, Australia’s navy rescued hundreds of people stranded on a beach in Victoria.

Australia's climate-denying PM, Scott Morrison, was jeered out of a fire-ravaged town by angry residents today.

The country has been burning since Sept.
- 17 have died, including 3 firefighters
- 15M+ acres burnt
- Est. 500M animals affected#ClimateCatastrophe#AustraliaFirespic.twitter.com/zPZWJlqqy4

Smoke from the fires has drifted 1,200 miles across the Tasman Sea and darkened the glaciers on New Zealand’s South Island. As a result of that darkening, the ice, which is already shrinking as a result of global warming, is expected to melt even faster.

The bush fires arrived at the tail end of Australia’s hottest and driest year on record, according to the country’s Bureau of Meteorology. On Dec. 17, the average temperature in Australia set a new record of 105.6°F. For decades, climate scientists have warned that steadily rising carbon dioxide emissions from human activity such as burning coal and operating fossil fuel vehicles are behind global warming. Since the beginning of the industrial age, carbon emissions have risen by 48 percent, data from NASA shows.

The fires themselves have added a large increment to Australia’s emissions.

Like President Trump, Morrison has long promoted the coal industry as a way to spur economic growth. Australia is the world’s leading exporter of coal, selling 77 percent of its production overseas. In 2017, Morrison made headlines by holding up a piece of coal while taunting liberals in the government for proposing sustainable energy policies. “This is coal. Don’t be afraid. Don’t be scared,” he said.

Last month, Morrison made clear that he would not support any new restrictions on coal production.

“What we won’t do is engage in reckless job-destroying and economy-crunching targets,” he said.

At the same time, however, Australia, unlike the U.S., has committed to reducing carbon emissions by at least 26 percent below 2005 levels by the year 2030.

More from Yahoo News:
Trump tells evangelicals that God is 'on our side'
Iran faces dilemma in avenging general's death: To strike back without starting a war
Democrats battle White House over executive power and congressional oversight