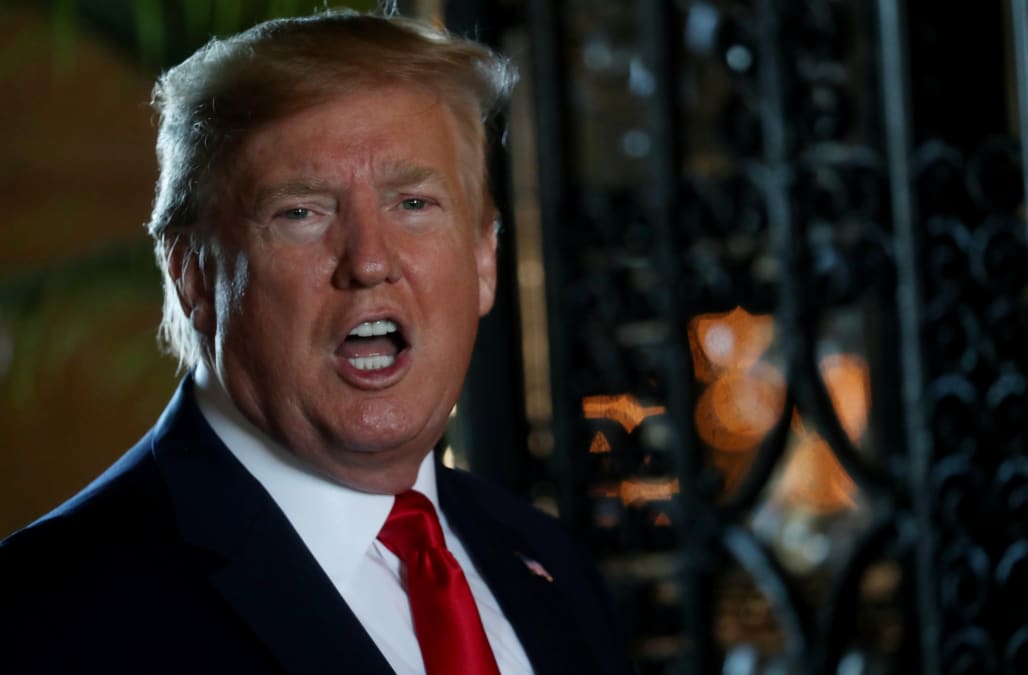 President Donald Trump on Friday tweeted his first remarks since the U.S. airstrike that killed Iranian general Qassem Soleimani, one of that country's most powerful military and political figures.

"Iran never won a war, but never lost a negotiation!" Trump tweeted Friday morning. It was not immediately clear what Trump meant by the statement.

The president's first tweet, minutes after the news, was an image of the American flag.

Iran never won a war, but never lost a negotiation!

In more comments on Twitter later Friday morning, Trump said Soleimani was responsible for numerous deaths, including of thousands of Americans, and that he "was both hated and feared within the country."

"General Qassem Soleimani has killed or badly wounded thousands of Americans over an extended period of time, and was plotting to kill many more ... but got caught! He was directly and indirectly responsible for the death of millions of people, including the recent large number .... of PROTESTERS killed in Iran itself," Trump tweeted.

General Qassem Soleimani has killed or badly wounded thousands of Americans over an extended period of time, and was plotting to kill many more...but got caught! He was directly and indirectly responsible for the death of millions of people, including the recent large number....

"While Iran will never be able to properly admit it, Soleimani was both hated and feared within the country. They are not nearly as saddened as the leaders will let the outside world believe. He should have been taken out many years ago!"

Recent polling showed that Soleimani was the most popular Iranian public figure, with eight in 10 Iranians having favorable views of him, according to a public opinion study published by the Center for International and Security Studies at the University of Maryland in October.

Trump ordered the U.S. strike that killed Qassem Soleimani, the high-profile commander of Iran's elite Quds Force and sometimes described as the country's second most influential person, at Baghdad International Airport on Thursday, according to the Pentagon.

Iranian President Hassan Rouhani vowed revenge in a statement on Friday after the news was confirmed, tweeting, "The great nation of Iran will take revenge for this heinous crime."

Democratic leaders Congress criticized Trump's decision. House Speaker Nancy Pelosi, D-Calif., said late Thursday night that the bombing was carried out without "authorization for use of military force" or consultation with Congress and called on the administration to immediately brief lawmakers on the next steps under consideration.

Republicans praised the president's action. Sen. Lindsey Graham, R-S.C., a member of the Senate Foreign Relations Committee, said in a statement late Thursday that Soleimani "had American blood on his hands" and welcomed what he called Trump’s "bold action against Iranian aggression."

Graham followed up his statement in a tweet on Friday, saying the strike was "a preemptive, defensive strike" to prevent potential future attacks on Americans in the region.

We killed the most powerful man in Tehran short of the Ayatollah.

This was not an act of revenge for what he had done in the past.

This was a preemptive, defensive strike planned to take out the organizer of attacks yet to come.

"He effectively signed his own death warrant by planning massive attacks against U.S. personnel in Iraq and throughout the Middle East," he wrote in another tweet.

The strike came amid heightened tensions between the Trump administration and Tehran over rocket attacks aimed at coalition forces in Iraq. U.S. officials have said those attacks were likely carried out by Iranian-backed militias with links to the Quds Force.

Secretary of State Mike Pompeo said in a Fox News interview Friday morning that the decision to kill the commander was “necessary” in the midst of what he called an “imminent attack” Soleimani had orchestrated. Pompeo said the purpose of the strike was to disrupt the attack and set “conditions for de-escalation.”

Pompeo also said that growing tensions over the past two weeks necessitated the strike, adding “the restraint that President Trump had shown was important. And it's now the time we needed to take action to restore deterrence.”