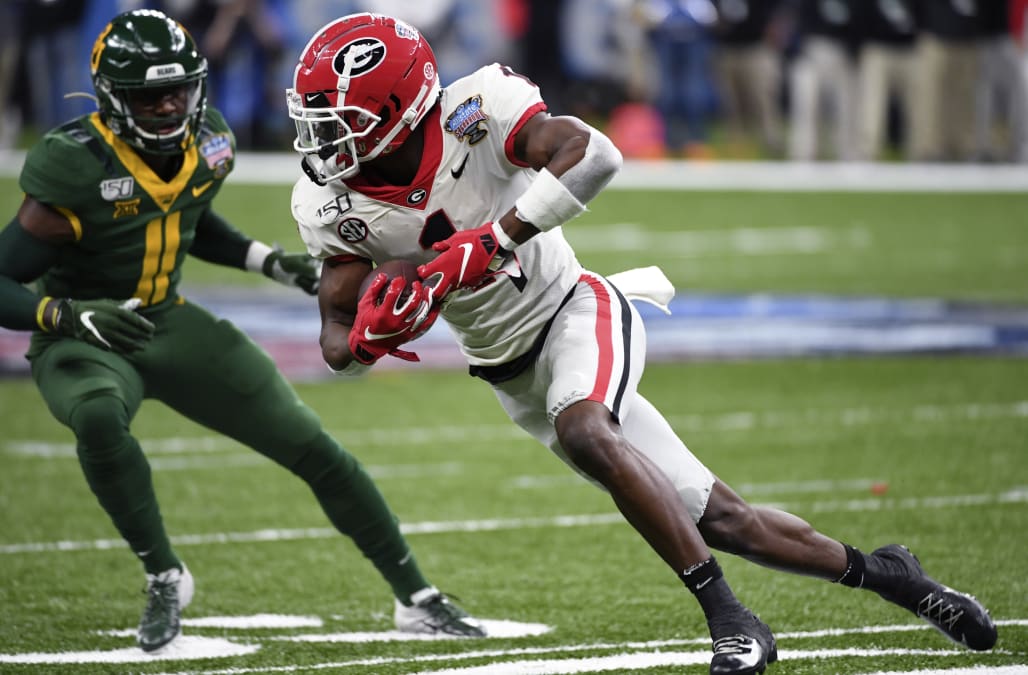 Georgia wasn’t going to lose the Sugar Bowl to a Big 12 opponent for a second straight season.

The No. 5 Bulldogs jumped out to a 19-0 lead at halftime thanks to a dominant performance by freshman WR George Pickens on the way to a 26-14 win over No. 7 Baylor on Wednesday night.

Georgia entered the game without the services of over a dozen players due to injury or NFL draft preparations. That included WR Lawrence Cager, who suffered an ankle injury at the end of the season and WR Dominick Blaylock who suffered a torn ACL against LSU in the SEC title game.

Pickens entered the Sugar Bowl as Georgia’s leading receiver and was unstoppable in the first half. He had 11 catches for 165 yards and a touchdown in the first 30 minutes as Georgia’s defense pitched a shutout.

While star RB D’Andre Swift wasn’t one of the myriad Bulldog players who didn’t play because of injury, Swift didn’t play much as he continued his recovery from a shoulder injury. He had just one carry for two yards, though he played a key role on Georgia’s fourth possession on a flea flicker. With Baylor’s defense worried about Swift’s rushing threat after he entered the game for the first time, Swift pitched back to QB Jake Fromm who completed a 46-yard pass to Pickens to set up a field goal.

Zamir White became the primary RB in Swift’s place. He rushed 18 times for 92 yards behind an offensive line that was missing two starters because of NFL draft reasons and was being coached by new offensive line coach and former Ole Miss coach Matt Luke.

Pickens finished the game with 12 catches and 175 yards.

Baylor QB Charlie Brewer was taken to the locker room on a golf cart midway through the fourth quarter after he slammed the back of his head on the turf when he was hit late while scrambling out of bounds.

Brewer, who had to leave the Big 12 championship game because of a concussion, was down on the ground for minutes before he was helped to his feet and taken to the cart. According to ESPN’s broadcast, the concussion Brewer suffered against Oklahoma on Dec. 7 was the third of his college career.

Before hitting his head on the turf on Wednesday, Brewer was 24-of-41 passing for 211 yards with two total touchdowns and an interception.

Will Jake Fromm come back?

Georgia is likely going to be a top-10 team entering the 2020 season. And the Bulldogs’ place in the top 10 could largely be determined by Fromm’s NFL decision.

Fromm is eligible to leave for the draft and could be a late first-round pick in a draft that could see a handful of QBs taken in the first 32 picks. Or he could choose to stay at Georgia his final year and another year in offensive coordinator James Coley’s offense with the hope of being an even earlier pick in the 2021 draft.

The case for Fromm coming back is a decent one. He had the worst season of his career in 2019. His completion percentage (60 percent) was the worst of his career and so was his yards per attempt (7.5). He also threw 24 TD passes, the same number of TDs he threw as a freshman in 2017.

If Fromm comes back, Georgia’s offense will have arguably the best returning QB in the SEC, a star in the making at wide receiver in Pickens and a former five-star recruit in White in line to take over at running back. That’s a really good nucleus.

Will Matt Rhule come back?

The Baylor coach said Tuesday that he planned on coming back to Baylor to 2020. But he’s been mentioned as a candidate for the open coaching positions with the New York Giants and Carolina Panthers.

Rhule served as an assistant coach with the Giants in 2012 before he was hired as Temple’s head coach in 2013. Rhule came to Baylor in 2017 after four seasons with the Owls and the Bears were 1-11 in his first year with the Bears.

But Baylor improved to 7-6 in 2018 and won the Texas Bowl before making another leap to 12-2 in 2019. NFL teams have clearly noticed how quickly and largely Baylor has improved under Rhule’s watch. We’ll find out in the coming days if that interest is real enough to pry Rhule away from Waco.