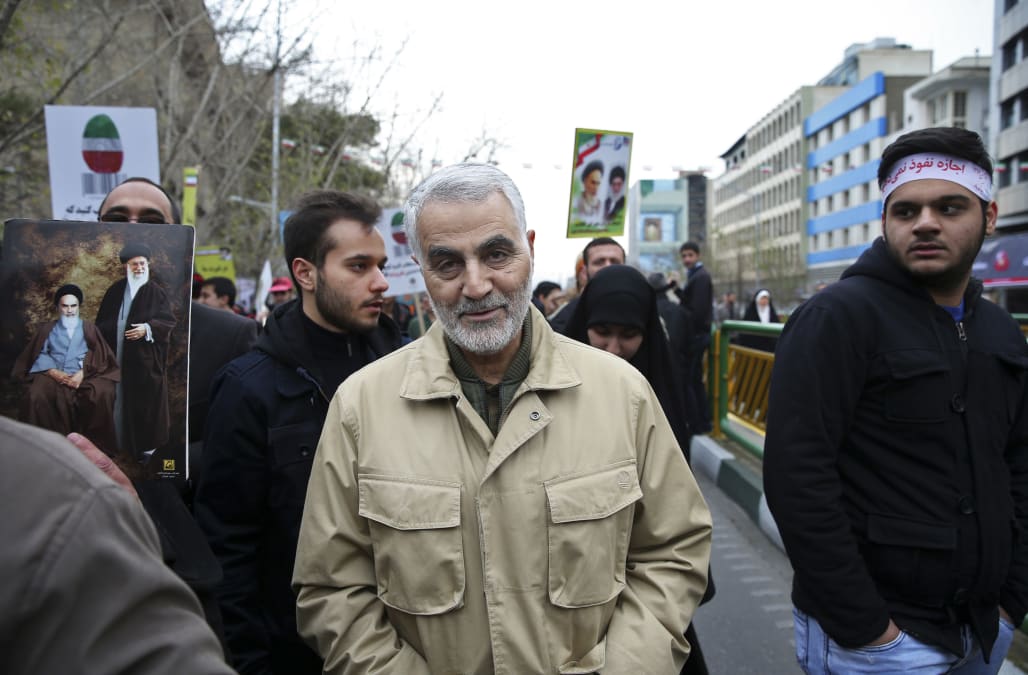 BAGHDAD — The Pentagon said Thursday that the U.S. military has killed Gen. Qassem Soleimani, the head of Iran’s elite Quds Force, at the direction of President Donald Trump.

The Defense Department said Soleimani “was actively developing plans to attack American diplomats and service members in Iraq and throughout the region." It also accused Soleimani of approving the attacks on the U.S. Embassy in Baghdad earlier this week.

A statement released late Thursday by the Pentagon said the strike on Soleimani “was aimed at deterring future Iranian attack plans."

The strike also killed Abu Mahdi al-Muhandis, deputy commander of Iran-backed militias in Iraq known as the Popular Mobilization Forces, or PMF, Iraqi officials said. The PMF media arm said the two were killed in an American airstrike that targeted their vehicle on the road to the airport.

Citing a Revolutionary Guard statement, Iranian state television said Soleimani was “martyred” in an attack by U.S. helicopters near the airport, without elaborating.

U.S. President Donald Trump, who was vacationing on his estate in Palm Beach, Florida, but sent out a tweet of an American flag.

Their deaths are a potential turning point in the Middle East and if the U.S. carried them out, it represents a drastic change for American policy toward Iran after months of tensions.

Tehran shot down a U.S. military surveillance drone and seized oil tankers. Meanwhile, the U.S. blames Iran for a series of attacks targeting tankers, as well as a September assault on Saudi Arabia’s oil industry that temporarily halved its production.

The tensions take root in Trump’s decision in May 2018 to withdraw the U.S. from Iran’s nuclear deal with world powers, struck under his predecessor.

A senior Iraqi politician and a high-level security official confirmed to The Associated Press that Soleimani and al-Muhandis were among those killed in the attack shortly after midnight. Two militia leaders loyal to Iran also confirmed the deaths, including an official with the Kataeb Hezbollah faction, which was involved in the New Year's Eve attack by Iran-backed militias on the U.S. Embassy in Baghdad.

The security official, speaking on condition of anonymity, said al-Muhandis had arrived to the airport in a convoy along with others to receive Soleimani, whose plane had arrived from either Lebanon or Syria. The airstrike took place near the cargo area after he left the plane to be greeted by al-Muhandis and others.

Two officials from the Iraqi Popular Mobilization Forces said Suleimani's body was torn to pieces in the attack while they did not find the body of al-Muhandis. Asenior politician said Soleimani's body was identified by the ring he wore.

The officials spoke on condition of anonymity because of the sensitivity of the subject and because they were not authorized to give official statements.

As the head of the Quds, or Jersualem, Force of Iran’s paramilitary Revolutionary Guard, Soleimani led all of its expeditionary forces. Quds Force members have deployed into Syria’s long war to support President Bashar Assad, as well as into Iraq in the wake of the 2003 U.S. invasion that toppled dictator Saddam Hussein, a longtime foe of Tehran.

Soleimani rose to prominence by advising forces fighting the Islamic State group in Iraq and in Syria on behalf of the embattled Assad.

U.S. officials say the Guard under Soleimani taught Iraqi militants how to manufacture and use especially deadly roadside bombs against U.S. troops after the invasion of Iraq. Iran has denied that. Soleimani himself remains popular among many Iranians, who see him as a selfless hero fighting Iran’s enemies abroad.

Soleimani had been rumored dead several times, including in a 2006 airplane crash that killed other military officials in northwestern Iran and following a 2012 bombing in Damascus that killed top aides of Assad. Rumors circulated in November 2015 that Soleimani was killed or seriously wounded leading forces loyal to Assad as they fought around Syria’s Aleppo.

Earlier Friday, an official with the Popular Mobilization Forces said seven people were killed by a missile fired at Baghdad International Airport, blaming the United States.

The official with the group known as the Popular Mobilization Forces said the dead included its airport protocol officer, identifying him as Mohammed Reda.

A security official confirmed that seven people were killed in the attack on the airport, describing it as an airstrike. Earlier, Iraq’s Security Media Cell, which releases information regarding Iraqi security, said Katyusha rockets landed near the airport's cargo hall, killing several people and setting two cars on fire.

It was not immediately clear who fired the missile or rockets or who was targeted. There was no immediate comment from the U.S.

The attack came amid tensions with the United States after a New Year's Eve attack by Iran-backed militias on the U.S. Embassy in Baghdad. The two-day embassy attack which ended Wednesday prompted President Donald Trump to order about 750 U.S. soldiers deployed to the Middle East.

It also prompted Secretary of State Mike Pompeo to postpone his trip to Ukraine and four other countries “to continue monitoring the ongoing situation in Iraq and ensure the safety and security of Americans in the Middle East,” State Department spokeswoman Morgan Ortagus said Wednesday.

The breach at the embassy followed U.S. airstrikes on Sunday that killed 25 fighters of the Iran-backed militia in Iraq, the Kataeb Hezbollah. The U.S. military said the strikes were in retaliation for last week’s killing of an American contractor in a rocket attack on an Iraqi military base that the U.S. blamed on the militia.

U.S. officials have suggested they were prepared to engage in further retaliatory attacks in Iraq.

“The game has changed,” Defense Secretary Mark Esper said Thursday, telling reporters that violent acts by Iran-backed Shiite militias in Iraq — including the rocket attack on Dec. 27 that killed one American — will be met with U.S. military force.

He said the Iraqi government has fallen short of its obligation to defend its American partner in the attack on the U.S. embassy.

The developments also represent a major downturn in Iraq-U.S. relations that could further undermine U.S. influence in the region and American troops in Iraq and weaken Washington’s hand in its pressure campaign against Iran.