Half a billion animals feared killed in Australian bushfires as at least 8,000 koalas are wiped out 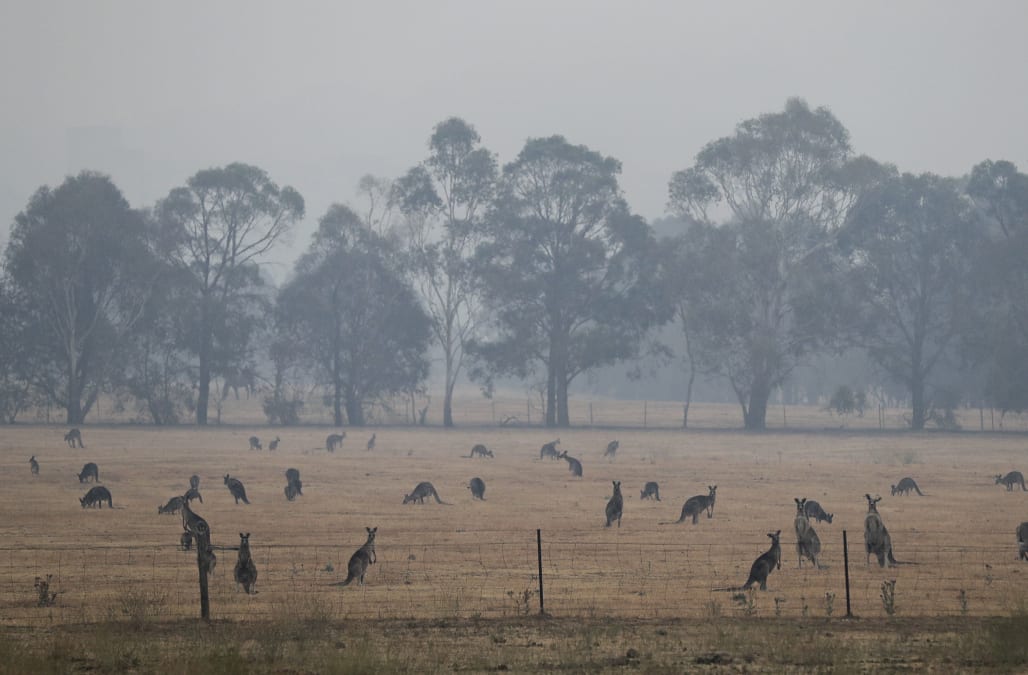 As the devastating bushfires in Australia continue to rage, estimates suggest up to half a billion animals may have died since the start of the crisis.

Some 480 million mammals, birds and reptiles are estimated to have perished since September, according to ecologists from the University of Sydney, while 8,000 koalas in New South Wales are thought to have been killed – nearly a third of the entire koala population in the region.

More koalas – who eat leaves on highly flammable eucalyptus trees – are feared dead in other areas, and that figure is thought likely to increase as flames have spread across New South Wales and Victoria over the past two days.

Australia deployed military ships and aircraft on Wednesday to help communities ravaged by the wildfires, which have left at least 17 people dead nationwide and sent thousands of residents and holidaymakers fleeing to the shoreline.

Video footage taken in recent days shows desperately thirsty koalas clinging to cyclists while being given water to drink, and kangaroos have been seen fleeing terrifying walls of fire.

Harrowing images have also showed the cockatoos falling dead out of trees.

Nature Conservation Council ecologist Mark Graham said: “The fires have burned so hot and so fast that there has been significant mortality of animals in the trees, but there is such a big area now that is still on fire and still burning that we will probably never find the bodies.

“[Koalas] really have no capacity to move fast enough to get away.”

Stand Up For Nature said in a letter to NSW Premier Gladys Berejiklian that “the full scale of wildlife losses will probably never be known, but they will surely number in the millions”.

She added: “These unprecedented fires have jeopardised the long-term viability of threatened species populations and forest ecosystems in several areas.”

Environment Minister Sussan Ley said the animal death figures would only be known after “the fires have calmed down and a proper assessment can be made”.

Tourists given 48 hours to flee Australia

Thousands of tourists have fled Australia's wildfire-ravaged eastern coast after being told they had 48 hours to get out of the area.

Worsening conditions were predicted as the military started to evacuate people trapped on the shore further south.

Officials said these conditions have the potential to be worse than those on Tuesday – the deadliest day of the bushfire crisis since it began.

The fire conditions were expected to deteriorate on Saturday as high temperatures and strong winds return.

Smoke from the bushfires has turned white glaciers brown in New Zealand – thousands of miles away from where the flames are raging.

Residents of the country said they could smell smoke early on Wednesday morning, while the haze made the sun appear red.

This the view from the top of the Tasman Glacier NZ today - whole South island experiencing bushfire clouds. We can actually smell the burning here in Christchurch. Thinking of you guys. 😢#nswbushfire#AustralianFires#AustraliaBurningpic.twitter.com/iCzOGkou4o

Near Franz Josef glacier. The “caramelised” snow is caused by dust from the bushfires. It was white yesterday pic.twitter.com/Ryqq685Ind

MetService, New Zealand’s official forecaster, tweeted: "Smoke which has travelled around 2,000km across the Tasman Sea can clearly be seen.

"Visibility in the smoke haze is as low as 10km in the worst affected areas."

Wall of smoke wider than Europe

A vast wall of smoke wider than Europe has been created as a result of the ongoing fires.

The 2.1 million square-mile plume is drifting across the Pacific Ocean and its size is an astonishing 14 times bigger than Japan.

If it were laid out on a map of Europe, it would stretch from Iceland to Turkey, according to Antti Lipponen, a physicist and research scientist at the Finnish Meteorological Institute.

Smoke from the bushfires meant that on Wednesday, Canberra, the nation's capital, had air quality more than 21 times the hazardous rating, to be reportedly the worst in the world.

More from Yahoo News:
'Shattered': Inside the secret battle to save America's undercover spies in the digital age
Bernie Sanders survived a heart attack, and so did his campaign. Now party leaders wonder if he's their future.
Giuliani's attack on Soros shows the liberal Jewish billionaire remains a top conservative target