Pope Francis apologizes for smacking woman’s hand: ‘So many times we lose patience’ 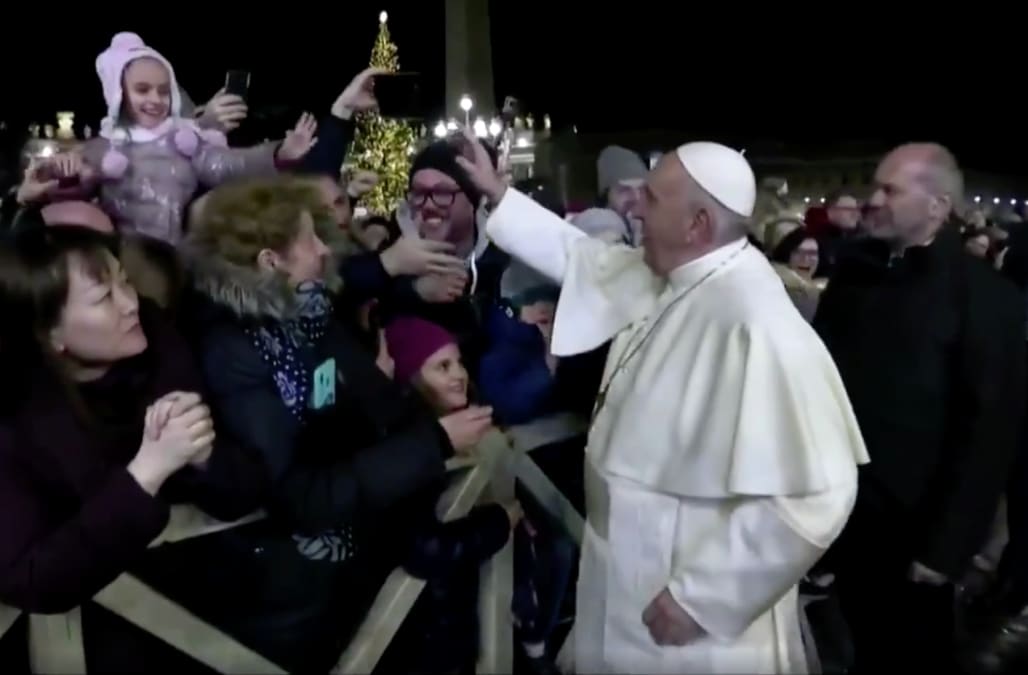 He may have the patience of a saint, but everything has a limit.

Pope Francis apologized Wednesday for losing his cool and slapping the hand of a pilgrim who grabbed him and tugged him toward her as he visited a Nativity scene in Vatican City.

“So many times we lose patience. It happens to me too,” he told thousands of worshipers gathered outside St. Peter’s Basilica for his New Year address.

The 83-year-old pontiff then said he was sorry for “the bad example” he gave just hours earlier.

Francis was walking through St. Peter’s Square Tuesday night when he began greeting some of the pilgrims who were standing on the other side of a barrier. At one point, as he turned away from the crowd, a woman yanked his arm and tried to tell him something.

But Francis — once described as the “Cool Pope” — was not pleased. Footage of the incident shows a visibly irritated Francis smacking her hand and freeing himself from her grip while scolding the woman, though it was not clear what he said to her.

This evening after visiting the Nativity scene in St. Peter's Square, Pope Francis loses his cool after being grabbed by a pilgrim who wouldn't let go of his hand. The Pope repeated slapped her hand and told her to let go of him. pic.twitter.com/6Qrgh8aZKz

Ironically, his off-script apology came moments before the Catholic leader denounced violence against women during his first mass of the year.

“Women are sources of life,” he told the crowd, according to a transcript of his message. “Yet they are continually insulted, beaten, raped, forced to prostitute themselves and to suppress the life they bear in the womb.

"Every form of violence inflicted upon a woman is a blasphemy against God, who was born of a woman. Humanity’s salvation came forth from the body of a woman: we can understand our degree of humanity by how we treat a woman’s body.”

Videos of Francis’ angry reaction went viral on social media Tuesday night, with many commenters calling the pope rude and aggressive while many others sided with him, noting that he could’ve easily been hurt.

More from New York Daily News:
Texas woman killed by celebratory gunfire during New Year’s party
Politics can’t heal our hate: Anger is eating at Americans from the inside
Defense is still a glaring weakness as Mets flip the calendar to 2020