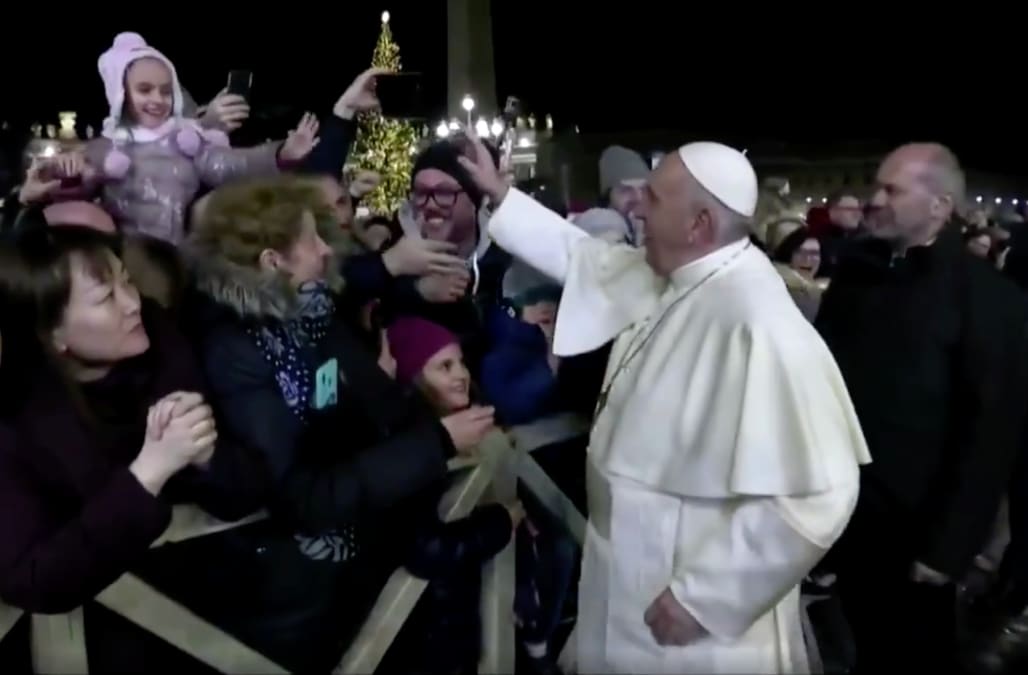 ROME, Dec 31 (Reuters) - A visibly indignant Pope Francis had to pull himself away from a woman in a crowd in St Peter's Square on Tuesday after she grabbed his hand and yanked him towards her.

Pope Francis was walking through the square in Vatican City and greeting pilgrims on his way to see the large Nativity scene set up in the huge, cobbled esplanade.

After reaching out to touch a child, the pope turned away from the crowd only for a nearby woman to seize his hand and pull her towards him. The abrupt gesture appeared to cause him pain and Francis swiftly wrenched his hand free.

The woman had made the sign of the cross as the pope had approached. It was not clear what she was saying as she subsequently tugged him towards her.

Hours later, in his first message of the new year, the pope denounced the use and abuse of women in modern society, and called for an end to the exploitation of the female body.

'All violence inflicted on women is a desecration of God'

Speaking in a packed St. Peter's Basilica, the pope also defended women's rights to migrate in search of a better future for their children and condemned those who only thought about economic growth rather than the well-being of others.

"All violence inflicted on women is a desecration of God," the pope said in his homily.

"How often is a woman's body sacrificed on the profane altar of advertising, profit, pornography, exploited as a surface to be used," he said, adding that the female body "must be freed from consumerism, it must be respected and honored."

The pope has regularly sought to defend women's rights during his pontificate and in April told the Roman Catholic Church it had to acknowledge a history of male domination and sexual abuse of women.

'Today even motherhood is humiliated...'

"We can understand our level of humanity by the way we treat a woman's body," he said on Wednesday.

He also used his homily to address another theme close to his heart, immigration, saying women who moved abroad to provide for their children should be honored and not scorned.

"Today even motherhood is humiliated, because the only growth that interests us is economic growth," he said.

"There are mothers, who risk perilous journeys to desperately try to give the fruit of the womb a better future and are judged to be redundant by people whose bellies are full of things, but whose hearts are empty of love."