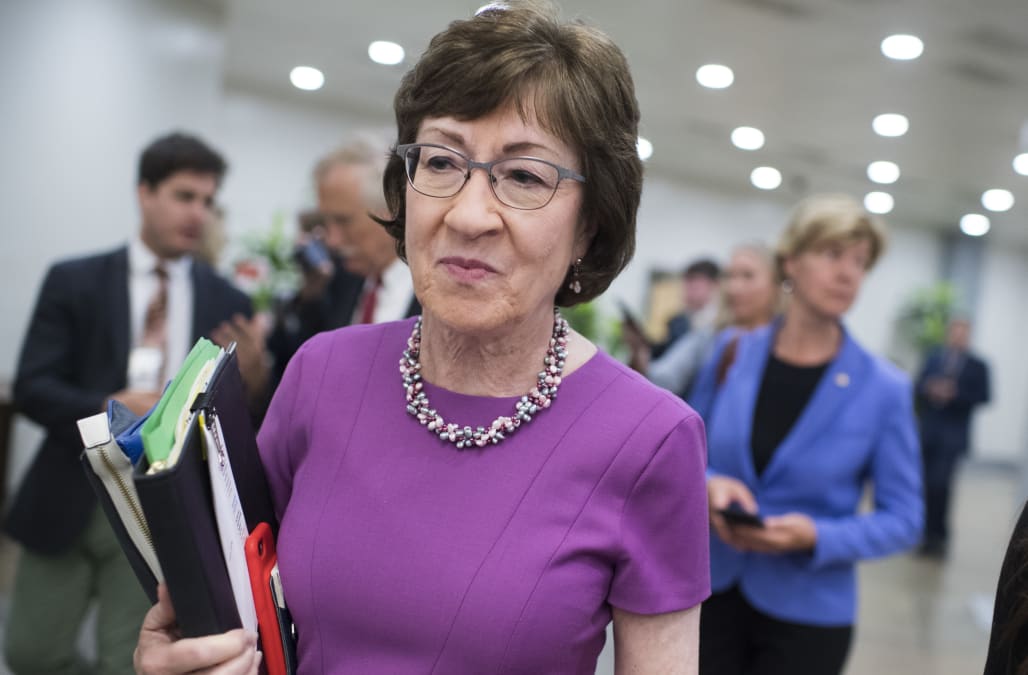 WASHINGTON (AP) — Republican Sen. Susan Collins of Maine says she's open to calling witnesses as part of the Senate impeachment trial of President Donald Trump, but she says it is “premature” to decide who should be called until senators see the evidence that is presented.

Collins also said it was inappropriate for Senate Majority Leader Mitch McConnell, a Republican, to pledge "total coordination" between the White House and the Senate during the impeachment trial.

"It is inappropriate, in my judgment, for senators on either side of the aisle to prejudge the evidence before they have heard what is presented to us,'' Collins told Maine Public Radio in an interview Monday.

Collins, who is running for reelection and is considered one of the nation's most vulnerable GOP senators, also faulted Democratic Sen. Elizabeth Warren of Massachusetts for saying Trump should be found guilty and removed from office.

"There are senators on both sides of the aisle, who, to me, are not giving the appearance of and the reality of judging that's in an impartial way,'' she said.

Collins is the second Republican senator to criticize McConnell, who recently told Fox News he would be working "in total coordination with the White House counsel's office and the people who are representing the president'' during impeachment.

Alaska Sen. Lisa Murkowski said last week that she was “disturbed” by McConnell's comments, adding that there should be distance between the White House and the Senate in how the trial is conducted.

“To me, it means that we have to take that step back from being hand in glove with the defense, and so I heard what Leader McConnell had said, I happened to think that that has further confused the process,” Murkowski said.

The remarks by the GOP senators come as Senate Democratic leader Chuck Schumer hailed as a “game changer” a news report detailing the role of White House officials in withholding aid to Ukraine, a key element of the impeachment effort.

The New York Times reported new details about efforts by acting White House chief of staff Mick Mulvaney and other officials to cut off the aid to Ukraine. Senate Democrats are seeking to call Mulvaney and three other White House officials as witnesses in the impeachment trial.

“Simply put: In our fight to have key documents and witnesses in a Senate impeachment trial, these new revelations are a game changer,'' Schumer said. ”Will the Senate hold a fair trial, or will it enable a cover-up?"

McConnell said last week that he is not ruling out calling witnesses in Trump's impeachment trial, but he indicated he was in no hurry to seek new testimony.

More from Aol.com:
U.S. Army bans soldiers from using TikTok
Trump to sign 'phase one' of China trade deal in mid-January
Tulsi Gabbard says impeachment has increased chance of Trump reelection: 'A disaster for our country'