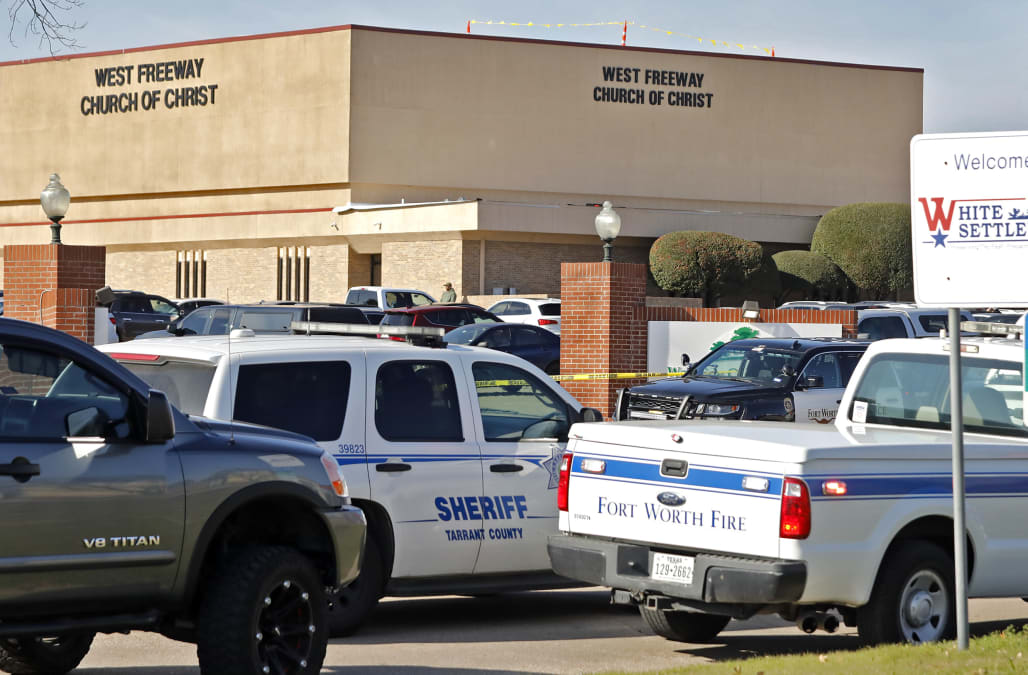 WHITE SETTLEMENT, Texas (AP) — Congregants shot and killed a man who opened fire in a church near Fort Worth, Texas, on Sunday, killing the attacker, police said.

A person shot by the suspect also died and a second parishioner has life-threatening injuries following the attack at the West Freeway Church of Christ, White Settlement Police Department Chief J.P. Bevering said during a news conference Sunday afternoon.

The assailant fired once before the “heroic actions” of the congregants retaliated to cut his assault short, Bevering said.

“Unfortunately, this country has seen so many of these that we’ve actually gotten used to it at this point. And it’s tragic and it’s a terrible situation, especially during the holiday season,” Jeoff Williams, a regional director with the Texas Department of Public Safety, said at the news conference. “I would like to point out that we have a couple of heroic parishioners who stopped short of just anything that you can even imagine, saved countless lives, and our hearts are going out to them and their families as well.”

Authorities have released scant details about the victims, the shooter and what led to the attack.

An elder at the church told the New York Times that one of those killed was a security guard who responded to the shooter, calling him a dear friend.

“He was trying to do what he needed to do to protect the rest of us,” said the elder, Mike Tinius.

“It’s extremely upsetting to see anyone committing violence,” he said.

Tinius said he didn't know the gunman and that the shooting appeared to be random.

A woman who answered the phone at the West Freeway Church of Christ told the AP she could not answer any questions and that she was told to direct inquiries to authorities.

WFAA, a Dallas-based TV station, reported that the church live-streamed the service on YouTube and that the video showed a man wearing a long coat produce a rifle or a shotgun which he fired twice before someone shot back. Some members of the congregation ducked behind pews while others with handguns rushed the gunman, WFAA said. It said church members can be heard screaming and crying.

The AP hasn't seen the video, which is marked as private on the video-sharing website.

Gov. Greg Abbott asked the state to pray for the victims, their loved ones and the community of White Settlement, about 8 miles (12 kilometers) west of Fort Worth.

“Places of worship are meant to be sacred, and I am grateful for the church members who acted quickly to take down the shooter and help prevent further loss of life,” Abbott said in a tweeted statement.

It is not the first deadly shooting to take place at a church in Texas. In November 2017, Devin Patrick Kelley opened fire on the congregation at a church in Sutherland Springs, Texas, killing more than two dozen worshippers, before taking his own life.

More from Aol.com:
Mexican police chief arrested in connection with November slaying of 9 Mormons
5 stabbed at Hanukkah gathering north of NYC
Daycare owner arrested after 26 kids found behind fake wall in a basement