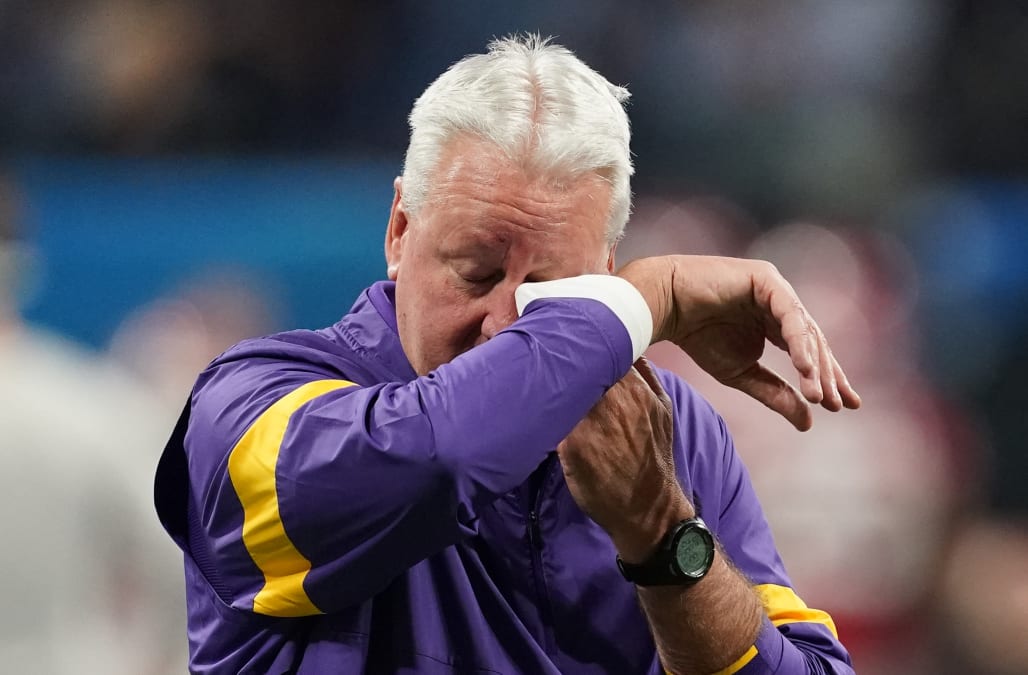 ATLANTA — Prior to Saturday’s College Football Playoff semifinal game, LSU offensive coordinator Steve Ensminger stood alone at the 35-yard line of Mercedes-Benz Stadium, his expression stoic as he watched LSU’s offense run through its drills. He threw glances into the stands, and he accepted the brief embraces of coaches and backup quarterback Myles Brennan.

Just hours before, a plane carrying Ensminger’s daughter-in-law and five other people crashed in Lafayette, Louisiana. Five people, including Carley McCord, the wife of Ensminger’s son Steve Jr., died in the crash. The plane was bound for Atlanta; McCord was bound for the game.

How do you even go on after that? How do you just go on about your job in the face of such crushing tragedy?

Ensminger coped with his grief by doing what he does best — orchestrating the devastating LSU offense — and doing it better than he’s done all season.

‘She was so full of life’

It’s been unseasonably warm all across the South this week. Temperatures in Lafayette topped 70 degrees Friday. But a thick fog rolled in Friday night, blanketing the airport when a Piper Cheyenne II rolled down the runway at Lafayette Regional Airport and prepared to take off at 9:20 a.m. Central time. The plane had filed a flight plan with an intended destination of Peachtree-Dekalb Airport in Atlanta.

What happened next remains unclear, but it happened fast. Eyewitnesses on the ground told local media that the plane appeared to hit power lines about a mile from the airport while attempting to return to Lafayette Regional.

The plane crashed in the parking lot of a local post office, colliding with a vehicle and igniting. According to the Lafayette Fire Department, five of the six passengers aboard the plane died: Ian E. Biggs, 51, the plane’s pilot; Robert Vaughn Crisp II, 59; Gretchen D. Vincent, 51; Michael Walker Vincent, 15; and McCord, 30. Stephen Wade Berzas survived the crash but was listed in critical condition. The National Transportation Safety Board dispatched a team to Lafayette late Saturday afternoon to investigate the crash.

News of the crash began to reach the stadium via social media around 90 minutes before kickoff. Tributes began to pour in for McCord, a Baton Rouge-based sideline reporter and in-stadium commentator for New Orleans station WDSU, as well as the New Orleans Saints and Pelicans.

“She is all over Southeast Lousiana, doing prep games of the week and then doing Saints in-stadium work on the Jumbotron in front of 75,000 people,” said Fletcher Mackel, a WDSU anchor, shortly before kickoff, his words toggling between present and past tense.

Mackel described McCord as a “unicorn” — someone with a deep knowledge of both Louisiana culture and sports, someone who could connect with anyone — “man, woman, professional athlete, high school athlete,” he said. “She was so full of life, and she loved what she was doing.”

Carley McCord, the daughter-in-law of LSU offensive coordinator Steve Ensminger, was one of five people killed in a plane crash in Louisiana today. The plane was on its way to the Peach Bowl.

Our thoughts are with the Ensminger family 💜 pic.twitter.com/owZsusUso6

"We are devastated by the loss of such an amazing talent and valued member of our WDSU family," WDSU’s president and general manager Joel Vilmenay said in a statement. "Carley's passion for sports journalism and her deep knowledge of Louisiana sports, from high school to the professional ranks, made her an exceptional journalist. As we reflect on her impressive body of work, we offer our deepest condolences to her family.”

The Saints and Pelicans released a joint statement that read in part, “Carley was a valued member of our New Orleans Saints and New Orleans Pelicans family as an in-game host and her infections personality and knowledge of both teams entertained our fans … Our thoughts and prayers go out to Carley’s family with this tragic loss.”

‘Coach, we’re going to get through this’

There was still a game to be played in Atlanta.

About 12:30 Saturday afternoon — roughly two hours after the crash — LSU head coach Ed Orgeron and assistant Derek Ponamsky were in the final stages of game prep. LSU had just finished its last walkthrough and kickoff was less than four hours away.

“Derek, you know what?” Orgeron said. “Thank God we’ve gone through the whole week without any incidents.” LSU’s players were a finely honed unit, with no disciplinary incidents or missed curfews — unusual, to say the least, for a college team during bowl week.

Then Ponamsky got a text about the crash.

Orgeron and Ensminger have known each other for 40 years, ever since Orgeron was Ensminger’s graduate assistant at McNeese State in 1979. So it fell to Orgeron to break the tragic news.

Without hesitation, Ensminger stayed at the stadium and continued on with pregame preparations.

“Coach,” Ensminger said to Orgeron, “we're going to get through this.”

Orgeron and the LSU coaching staff decided not to tell the team about the crash ahead of the game. Some learned prior to kickoff; others, like Joe Burrow, didn’t learn until afterward. Burrow, in fact, found out on live TV:

Even so, Ensminger and quarterbacks coach Joe Brady crafted a masterful, relentless game plan up in the booth, a 63-28 demolition that didn’t even seem that close. Brady allowed that it was an emotional time in the booth together, high above the field, but he didn’t elaborate.

After the game, Ensminger stood on the field, a purple PEACH BOWL CHAMPIONS T-shirt thrown over his shoulder. Onstage, Burrow and Orgeron accepted trophies and honors. Out on the field, Ensminger accepted a steady stream of tearful hugs and condolences.

Just after the ceremony concluded, with confetti still in the air, Ensminger turned and began walking, alone, toward the LSU tunnel. He declined media requests to speak, and kept his eyes focused ahead even as LSU fans 60 rows deep cheered above him. He walked past a long line of purple-and-gold-clad revelers and disappeared into the LSU locker room.

“I can’t think of what he was able to do today with the circumstances,” Brady said. “It speaks to the type of man he is. Everybody’s just thinking about his family.”

“We saw her around all the time,” Orgeron said of McCord. “An outstanding young lady with a bright future. It's a shame it happened.”