Tulsi Gabbard banks on billboards, yard signs to get her message out 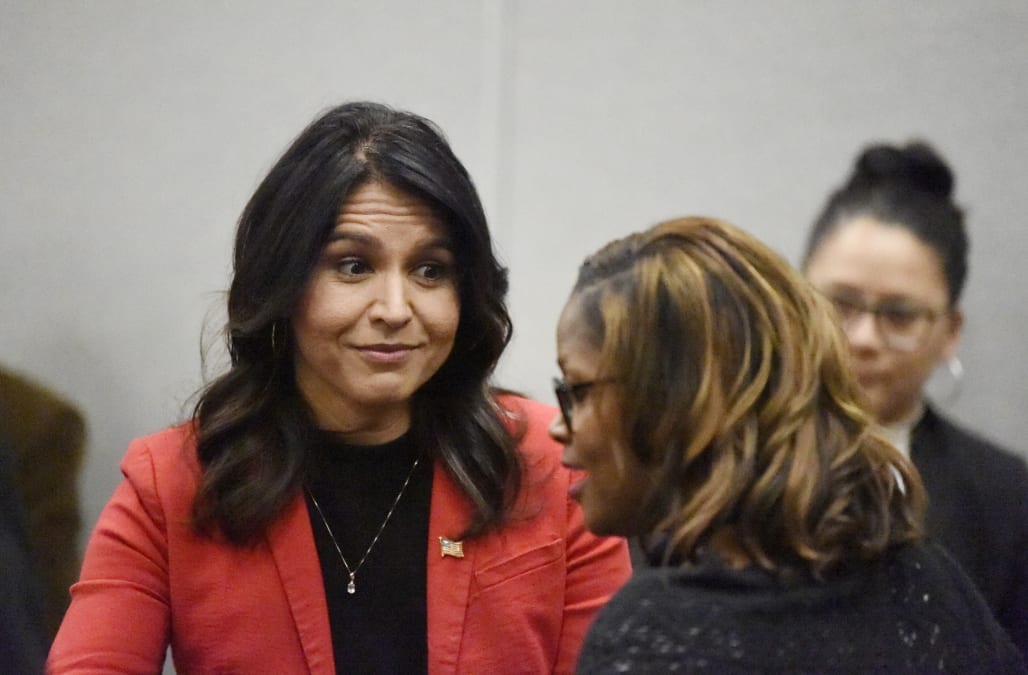 MANCHESTER, New Hampshire — For presidential candidates, maintaining a steady presence in the critical early voting states can be challenging. But voters in Iowa, New Hampshire and South Carolina see Rep. Tulsi Gabbard all the time — in the form of billboards and lawn signs.

Gabbard has spent $678,790 on billboards alone in the first three quarters of this year. Her campaign's focus on billboard advertising is unique — billionaire Tom Steyer recently made a billboard investment, but no other candidate appears to have listed the medium as a campaign expenditure in filings with the Federal Election Commission. Overall, she's spent at least $6.4 million since launching her campaign in February.

"Nobody does billboards. You're talking about it right now, you’re tweeting about it," Gabbard told reporters in Laconia, New Hampshire.

"Trusting your intuition when you're voting is really important," Brenda Rowe, 55, a resident of Concord, New Hampshire, said. "When I saw someone had a huge, huge poster on their barn in Henniker, I just felt this huge wave that this was coming and that people were behind her, not just my intuition."

That's not to say Gabbard hasn't invested in advertising on social media, where she attracts a highly engaged following. She's spent $582,000 on Facebook ads and $167,000 on Twitter before its ban on political ads, but her investment in billboards stands out in the 2020 field, as several candidates choose instead to invest in television advertising in the early states.

In a touch of irony, Gabbard's home state of Hawaii is one of four that prohibits billboards. Because of the ban, Hawaiian politicians and supporters in the 1960s began the tradition of "sign waving," which entails holding candidates' signs by the roadside and waving at cars.

On her billboards in the early states, "TULSI 2020" greets passersby, while the tagline "A Soldier’s Heart" (Gabbard is a military veteran) appears on some roadside fixtures.

Gabbard's New Hampshire coordinator, Shani Pomerantz, her only paid staffer in the state, said while she sees the results of the billboard investment — at least $231,000 in the Granite State and neighboring Massachusetts — it's no substitute for the candidate herself holding events there.

"I don’t think it's ever been a replacement," she said. "It gives people time to get familiar with her, so when she shows up, they want to find out more."

The Steyer campaign began investing in both traditional and digital billboards in the first four primary states in early December as part of its multiplatform advertising approach.

"Most people drive, right? It's a different way of getting somebody’s attention," Steyer national press secretary Alberto Lammers told NBC News. "We know that people are going fast, we get one quick message, and that’s it. Everybody drives a car. Whether they listen to radio or not, they have to pay attention to the road, so it's helpful to be in front of them."

Gabbard, who is running in the single digits in the early states and at just over 1 percent nationally, according to the Real Clear Politics polling average, has less than a dozen paid staffers and relies heavily on a vast network of unpaid volunteers in early states to organize canvasses and plan candidate events, with many uprooting from their home states to work full time in Iowa and New Hampshire.

She does not have a formal campaign manager. Instead, Gabbard and her sister and senior adviser, Vrindavan, are the leaders of the operation.

The campaign said it "has a policy of not commenting on campaign strategy or strategists" and declined to discuss the approach behind billboards. It also would not disclose the number of billboards it has rented in the early voting states.

Gabbard called the use of full-time volunteers, coupled with investment in social media, "the best of both worlds, going directly to people to engage with them using technology."

Asked about investing more in billboard rentals than staff salaries and consultants, she emphasized how her volunteers are driven by passion rather than money.

"It's not a business, this is not an economic operation," Gabbard said in an interview at a Durham, New Hampshire, campaign stop last month. "This is about bringing people together who want to be here, to actually be the change … They're knocking on doors because they're passionate and they really believe. It's not about saying, 'Hey, how can I get a paycheck?'"

According to Brent Thomson, CEO of digital billboard company Blip Billboards, Gabbard's unconventional strategy could pay off with a "captive commuter audience" due to changing media habits of traditional TV viewers.

"Dollar for dollar, billboard advertising can carry brand-building objectives much farther because billboards cannot be skipped or deleted," he said. "When compared with other broadcast media, billboards have lower costs and higher retention and recall rates."

Though billboards are more expensive than Facebook ads — where 1,000 "impressions" cost about $7.19 — they seem to be making an impact with some primary voters, especially in states like South Carolina where Gabbard has made five trips in nearly 10 months as a candidate.

"I think it's a smart thing to do — you can't be everywhere," said Nancy Carder, a voter from North Myrtle Beach, S.C.