Inside Anthony Davis' desire to become a Laker 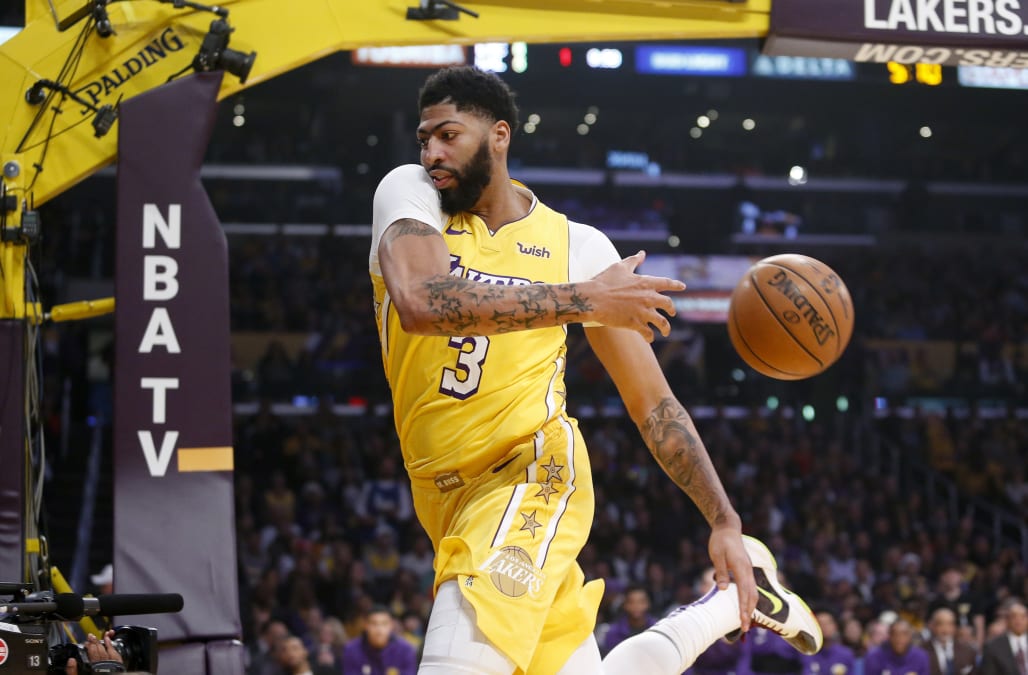 LOS ANGELES — With 1.9 seconds remaining in the game, the Los Angeles Clippers were close to going up 2-0 in the season series with the in-town rival Lakers. Clippers forward Paul George was at the free-throw line, and teammate Patrick Beverley was near the bench mocking LeBron James.

Beverley pretended to hold the ball above his head in a flimsy offensive stance and then he reversed roles, playing aggressively and pretending to slap the ball out of the hands of the four-time MVP. He was physically mocking the sequence that took place the possession before. His demonstration, which drew laughter from the Clippers’ bench, derided the way James tried to set up his shot with the Lakers needing a 3-pointer to tie the game.

Instead, the Clippers prevailed, overcoming a 15-point third-quarter deficit to snatch a 111-106 victory on the Lakers’ home court Wednesday.

For Lakers star Anthony Davis, it was tough watching Beverley — a fellow Chicagoan — celebrating on national television at the expense of his team, but this was the stage Davis had craved.

The 6-foot-11 forward, who was showered with MVP chants throughout the game, has helped the Lakers to the top of the Western Conference standings (24-7) despite the marquee Christmas Day loss.

What a difference a year makes.

This time last year, Davis was the New Orleans Pelicans' franchise player and the team was 15-19.

The Pelicans were not on the Christmas Day slate last year, but Davis remembers vividly that it was around that time when he seriously started contemplating a relocation.

“I think it was just the wins weren’t adding up, and it seemed like we weren’t making the playoffs," Davis told Yahoo Sports after posting 24 points, six rebounds, two steals and two blocks. "Everyone around me and everyone who knows me knows that I want to win. And I didn’t feel like we were going to be able to do that last year. I want to be able to win. We got off to a great start. We were 4-0. Then guys got hurt and little things started to go south. But my mindset at the time was to keep trying to lead my team.”

The losses continued to pile up, and in early January, Davis knew he wanted to go to a more attractive situation. But the NBA wasn't turned upside down until he requested a trade on Jan. 28.

"You don’t have a lot of time in this league. It goes by very fast," he told Yahoo Sports. "So for me, it was about putting myself in position where I can win before this career is over. And hopefully win several championships and have several winning seasons. That’s what was going through my head at that time. I’m not sure what the record was, but I felt like it was time for me to at least let the organization know where my head was at.”

The Lakers were always his preferred destination, and it initially seemed as if he wouldn't get his wish because of the bad blood that was brewing from those in the Pelicans' organization who felt agent Rich Paul and James were attempting to force Davis to Los Angeles.

“There were several teams in mind," Davis told Yahoo Sports. "My agent [Paul] was doing a good job talking to the front office and management over there. He was the one communicating back and forth with them, and I was just trying to continue being a leader over there and still playing when they allowed me to. I’m not sure what was really being talked about, but the Pelicans didn’t do anything. So I still tried to lead that team, and when I got a chance to play, I played my heart out. It’s basketball. I’m still going to be a professional, and any time I’m on the floor with four other guys, I’m going to go out there and compete.”

Six months later and with a new Pelicans regime led by David Griffin, Davis' dream scenario occurred. He was traded to the Lakers.

“I just wanted to win, and right now we’re winning besides these four we lost in a row," Davis told Yahoo Sports. "But we still have the best record in the West, and we’re going to continue to try to figure things out. But having the best record in the West and winning games in the regular season is not what my end goal is. I want to have some hardware. And I feel like we have the team and the personnel to do it. It’s a long season.”

Davis said he's thankful to be competing at a high level and building habits that are suited for games in June. The Christmas Day loss hurts, but he said he's glad to be a holiday participant with this group.

Now, the Lakers will proceed with the rest of the season knowing the Clippers maintain bragging rights until ... wait for it ... Jan. 28.

“They’re a good team down there," Davis told Yahoo Sports. "Two guys who are always in the MVP talks and a lot of role guys around them who complement them. But just like the Milwaukee game [in which the Lakers lost Thursday], it's not you win now and here’s the trophy. We’ll see them two more times in the regular season. They’re a different team, we’re a different team. But we felt like we gave this one away. We’ll see them again.”