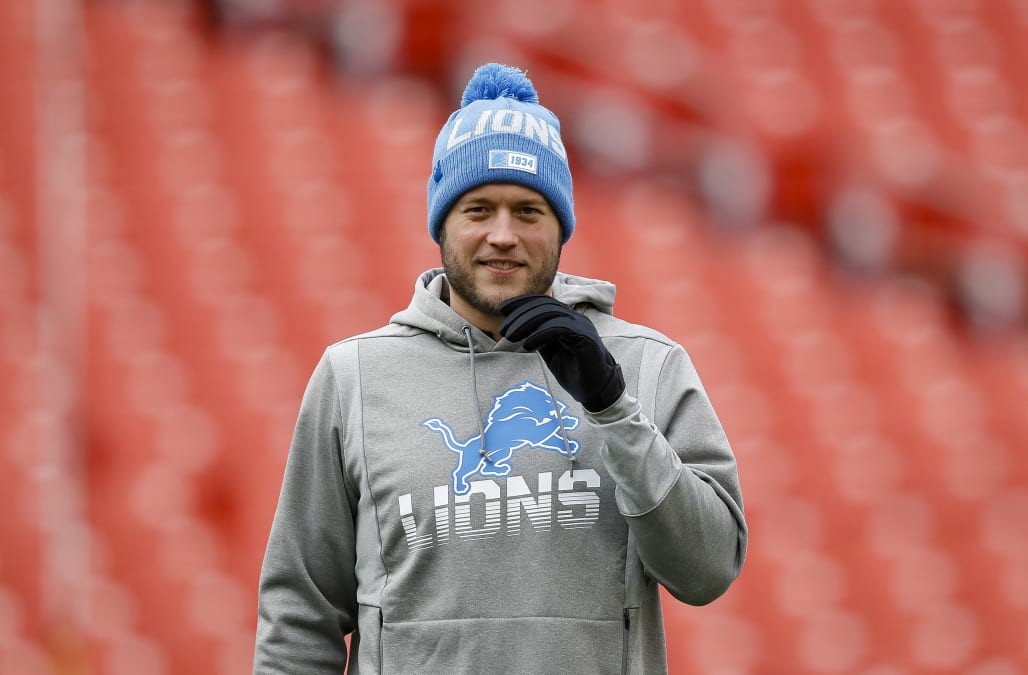 Around the holidays, we’re often reminded that the athletes we admire for their on-field accomplishments are just as remarkable off of it.

Detroit Lions quarterback Matthew Stafford is one of those athletes.

He and his wife Kelly surprised a trio of young brothers who recently lost their father with Christmas presents last week. Further, Matthew stuck around to play “Madden NFL” — as himself, of course.

The boys just about lost their minds when they opened the door to the Staffords: “Oh my God!” they yelled, repeatedly.

And it’s not like the Staffords have had an easy year themselves. Kelly underwent surgery to remove a non-cancerous brain tumor early in the year and took part in an emotional interview with ESPN to describe her diagnosis and recovery process.

Matthew Stafford with his family
Detroit Lions quarterback Matthew Stafford, right, smiles while watches the Detroit Pistons play the Cleveland Cavaliers with his wife Kelly, left, during the first half of an NBA basketball game Tuesday, Nov. 17, 2015, in Auburn Hills, Mich. (AP Photo/Duane Burleson)
FILE - In this Sept. 24, 2017, file photo, Kelly Stafford, wife of Detroit Lions quarterback Matthew Stafford, holds the couple's twins Sawyer, left, and Chandler during pre-game of an NFL football game against the Atlanta Falcons, in Detroit. Kelly Stafford plans to have surgery to remove a brain tumor. Stafford shared the details Wednesday, April 3, 2019, on her Instagram account. She says an MRI showed the tumor on cranial nerves after she had vertigo spells within the last year. (AP Photo/Rick Osentoski, File)
There are honestly no words for what I have felt in the past few days. I am beyond grateful and just want to thank everyone who has reached out with their support and especially with prayers for me and my family In these past few days. The ability to connect and support each other is what makes social media such an amazing thing. I truly am beyond grateful. I am going to take some time away from social media so that I can focus on what’s most important in life.. my family. Thank y’all so much again for all of the support and prayers, it means more than you will ever know. Until then. ✌🏻and ❤️
Being the #1 man in four girls’ lives can be exhausting.. but you make it look easy and I’m so grateful for that!!
Detroit Lions quarterback Matthew Stafford, center, and girlfriend Kelly Hall, right, laugh at a friend while watching an NBA basketball game between the Detroit Pistons and the Chicago Bulls, Sunday, April 7, 2013, in Auburn Hills, Mich. (AP Photo/Duane Burleson)
Detroit Lions quarterback Matt Stafford, right, and Kelly Hall arrive at the ESPY Awards on Wednesday, July 11, 2012, in Los Angeles. (Photo by Chris Pizzello/Invision/AP)
So fun getting to see all of our friends and family while being back in atl for such a short time! Exhausted and ready for my girls.
2009 VS 2019 #10yearchallenge #dontknowwhatitis #butikeepseeingit #so🤷🏼‍♀️ #kidshaveagedme #andmadematthewhotter #wtf
Another Christmas in the books. Planning to sleep until the New Year.. if @staffordsistersquad will let me. ✌🏻
Just a little Christmas preview on this beautiful Sunday. #hunterhopestafford
Up Next

Matthew, 31, is dealing with fractured bones in his back and was officially placed on the injured reserve list earlier this month after missing six games — his first time in eight straight seasons missing a game.