Barack Obama is spending the holidays golfing and holding babies 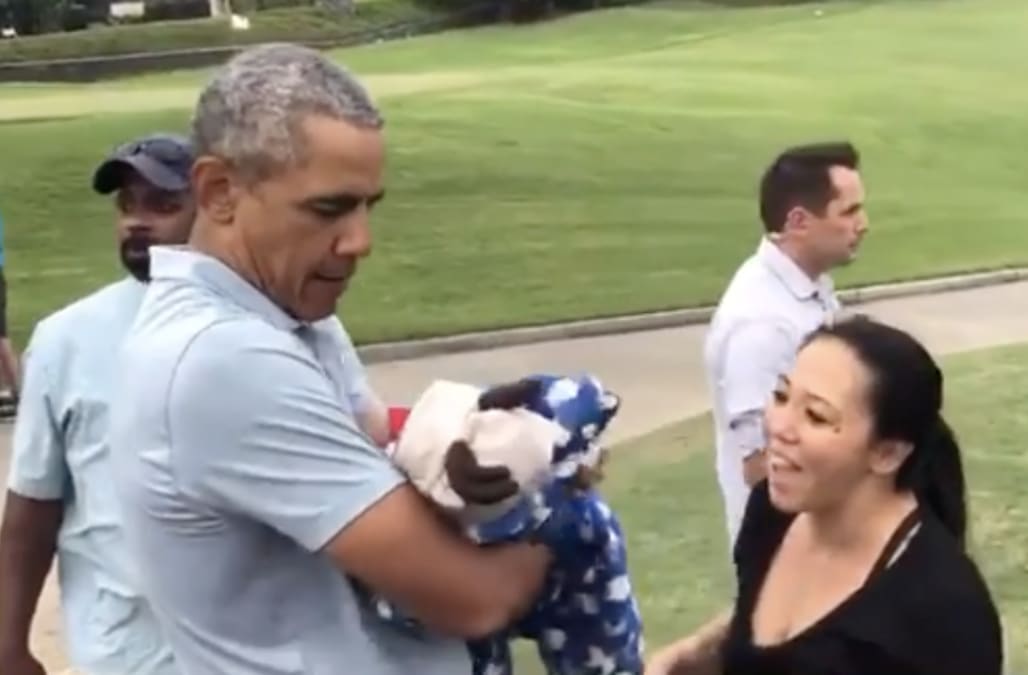 Former President Barack Obama is spending the holidays as he usually does — golfing in Hawaii. But this year, he hugged a few babies along the way.

It started Friday when Obama approached a family and asked if he could hold their 3-month-old daughter, Riley Lewis. In a video that has since racked up over 1 million views on Twitter, Obama is heard saying, "Who is this cutie pie?"

The former president then holds Riley in his arms and gives her a kiss.

President Obama gracefully walked up and asked to hold my niece Riley. He was golfing in Hawaii. My niece is the GOAT period. #Hawaii#obama#President#MichelleObamapic.twitter.com/u6gmhGqzx4

"I was just in awe," Riley's mom Tiffany Lewis told Good Morning America. "I look back at the pictures and I look so crazy because my mouth was just wide open in shock."

Andrea Jones, Riley's aunt, posted an additional photo of the president with Riley and her parents.

Jones just might be right because as if that moment wasn't sweet enough, Obama managed to find another baby to hold on Sunday. Krystle Ilar told HuffPost she and some friends were at Mid-Pacific Country Club in Lanikai when they got word that Obama was on the 18th hole.

They made their way to where he was and to Ilar's surprise, he asked to hold her 2-month-old son, Levi.

In a video shared on Instagram, Obama is seen holding Levi and cooing at the baby. He says hello and even shakes his hand.

Look who got to hold Levi! Thank you President Barack Obama for showing much aloha to us and especially Levi! Video credit: @island_stars808

"As I watched him hold my son, my heart overflowed. He was so genuine and so gentle with my son, Levi," Ilar told HuffPost. "It’s an amazing experience and one that we’ll all cherish for a lifetime!"

"When Levi gets older, my husband and I will share with him about how he got to be held and loved on by the 44th president," she added.

Obama's trip isn't over just yet, so there may be more baby-holding moments before the year ends. Fingers crossed.

More from Aol.com:
Dad shocked by daughter's reaction to 'worst Christmas gift ever'
White Sands monument re-designated as US national park
Boy kidnapped from hospital in 1964 found through ancestry sites