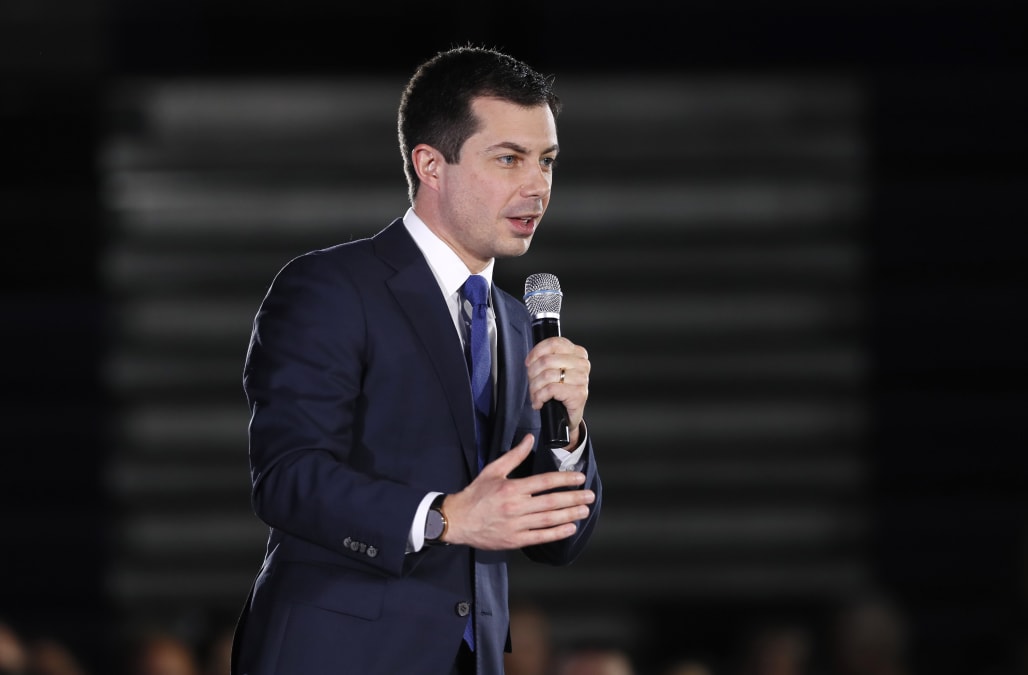 PERRY, Iowa – Pete Buttigieg, who has been rising in the polls but whose presidential bid has not caught on with Latino and African American voters, released his solutions for America’s immigration challenges with a reminder of how the country’s economy is dependent on it.

“Immigration is an issue that affects every part of America, not only border states, but right here in the heartland where so many communities, especially in the agriculture industry — but frankly, from medicine to manufacturing relies on immigration to grow,” said Buttigieg, who is the mayor of South Bend, Indiana.

He made the remark to reporters Sunday after a town hall in Perry, a city about 40 miles northwest of Des Moines. Iowa saw dramatic increases in its foreign-born population in the last two decades. However, they are a very small share, 5.3 percent, of the state's population, according to census data analyzed by the Migration Policy Institute.

In a statement detailing his proposal, Buttigieg extolled the tradition of U.S. immigration, including the immigration history of South Bend where French fur trappers arrived in the 1800s, followed by German and Polish immigrants who were laborers in Studebaker factories, and more recent arrivals from Mexico, Honduras, Myanmar and Cameroon. Buttigieg’s father is an immigrant from the southern European island of Malta.

“We must recognize the great contributions of immigrants and create an immigration system that meets the needs of our nation now and in the years ahead,” he said.

Buttigieg dubbed his plan “I was a stranger and you welcomed me’: An Immigration Policy for a New Era.” It’s a reference to a Bible verse, Matthew 25:35-40, that Buttigieg regularly quotes on the campaign trail.

“We've been talking about immigration for a long time, but wanted to make sure that I added more specifics about things that need to change because this has to be a swift priority for the new administration,” he said.

Buttigieg lags behind other candidates in addressing the issue with a specific plan. Julián Castro, a former mayor of San Antonio and a former Cabinet member under President Barack Obama, was the first to present a plan as a candidate in early April. Other candidates have followed, with Joe Biden’s issued Dec. 11.

At Thursday’s debate, Democratic candidates had one of their most unified moments when the discussion turned to immigration, with all largely agreeing on the need to undo policies implemented by President Donald Trump. However, stickier issues such as whether to decriminalize illegal border crossings, as Castro has proposed, or abolish Immigration and Customs Enforcement were not discussed.

Buttigieg’s plan was rolled out amid some jockeying for Latino voters' support, who at 32 million will be the largest nonwhite electorate in 2020. Over the weekend, Rep. Alexandria Ocasio-Cortez, D-N.Y., was the keynote speaker at a Spanish language town hall for Democratic presidential candidate Bernie Sanders that also included San Juan, Puerto Rico, Mayor Carmen Yulín Cruz.

Buttigieg has been trying to broaden his base beyond college-educated white voters. In July, the mayor released his "Douglass Plan" focusing on African Americans and a plan aimed at Latinos, “El Pueblo Unido/A People United: A New Era for Latinos, last week.

Not all immigrants are Latinos and Latino voters name other issues as top concerns, including the economy and health. But Latinos were about half of the immigrant population in 2017, according to Pew Research Center. Some Latino voters consider how candidates and politicians treat immigrants to be a racial issue.

Buttigieg proposes closing all for-profit detention facilities and promoting a community-based case management program that was started in the Obama administration but ended by the Trump administration.

Under his administration, immigrants who are not a threat to public safety would be released on recognizance or to an alternative detention program. Young adults, who turn 18 while in Health and Human Services custody, would be allowed to remain in HHS custody rather than being transferred to ICE.

Buttigieg said he would create an independent immigration court system, separating it from the political oversight of the attorney general.

Buttigieg would allow U.S. Citizenship and Immigration Services to adjudicate certain types of cases that tend to overwhelm the system, including cancellation of removal requests and “readjustments,” which correct technical errors.

Beyond the immigration process, the plan outlines a number of reforms to current visa rules. It allows for temporary work visas to be tied to a particular industry rather than a specific employer and calls for biennial reevaluation of the number of employment-based visas to meet the economic needs at the time.

Buttigieg also highlights his proposed Community Renewal Visa, which would be granted for workers in communities that have lost their working-age population or are struggling economically. Communities could request immigrants with skills in certain fields and applicants would be eligible for a green card after three years if they stay in the community, five if they move. A visa directed to areas based on need would be a significant departure from the United States practice on how visas are allocated.

On border security, Buttigieg would halt the construction of a border wall, investing instead in technologically-driven border solutions with a potential price tag of $1 billion to $2 billion.

He proposes prioritizing enforcement to those who have committed serious crimes, people who have just arrived and have no asylum or humanitarian claims and “people who circumvent our laws for profit,” such as employers exploiting immigrant labor and human traffickers.

From a global standpoint, Buttigieg promises to reinstate the nearly $450 million in aid to Central American countries including El Salvador, Honduras and Guatemala to address issues from gender-based violence and human trafficking to climate change, while improving the rule of law and combating corruption.

Warren goes after Buttigieg, Bloomberg in change of tactics
Joe Biden on Pete Buttigieg's health care plan: 'He stole it'